Never one for retreat, the Trust charged forward on preservation and education projects throughout 2021, resulting in milestones to its preservation portfolio and unprecedented digital engagement

(Washington, D.C.) – Dedicated to connecting Americans with their history on the ground where it was forged through battlefield preservation and education, the American Battlefield Trust held true to its mission in 2021. The jam-packed year even yielded a landmark moment in the organization’s 37-year history, cresting 54,000 acres saved across 150 battlefield sites. Simultaneously, consistent outreach efforts amounted to peak engagement with digital products, expanded collaboration with kindred organizations and demonstrated support for battlefield preservation and education among federal and state officials and the public at large.

“Even as so much around us was in flux last year, the Trust’s work to save the landscapes where ordinary Americans struggled, sacrificed and persevered remained constant and reliable,” said Trust President David Duncan. “We prevailed at legendary locations like Gettysburg and Vicksburg, and at less –famous, but no less –critical, sites to move toward a more complete understanding of our nation’s story from the Revolution through the Civil War — and how those events still resonate today. Moreover, we engaged teachers and students worldwide with a wealth of new and updated resources and programs.”

Marking an extraordinary point in the Trust’s campaign to preserve America’s battlefields, the Trust successfully protected land at its 150th site: Great Bridge, a Revolutionary War battlefield in Chesapeake, Va. Part of a modern city, the battlefield is surrounded by development threats. The 0.66-acre tract the Trust saved had been listed “for lease,” with a sign planted on the land advertising the development of a strip shopping center on the hallowed ground across which Virginia Patriots and British forces — ranging in color and creed — changed the course of American history in a matter of minutes. With the support of the American Battlefield Protection Program, the Virginia Battlefield Preservation Fund, the City of Chesapeake, the Great Bridge Battlefield and Waterways Foundation and Trust donors, the organization has secured the future of the significant property.

Beyond the preservation of pivotal hallowed ground, the Trust sought to fill minds with knowledge of America’s first 100 years. Keeping pace with the increased digital demands shaped by the circumstances surrounding COVID-19, the organization introduced at least 364 new or reinvigorated online assets — one for each day of the year — to ensure that its offerings wouldn’t simply “do the trick,” but exceed expectations while making room for new insight and perspectives. This treasure trove of resources played a tremendous role in driving more than 14 million visitors to battlefields.org in 2021. The Trust team embarked on five ambitious video swings — across Antietam, Manassas, Gettysburg and Petersburg, as well as numerous North Carolina, Tennessee and Mississippi battlefields — through which an impressive 129 videos were produced. While these shorter videos provide access to the battlefields and expert historians from afar, the November debut of the Trust’s Guided Tour of the Gettysburg Battlefield took detail to another level with over two hours of stories shared, as Garry Adelman, our chief historian and a licensed battlefield guide at the site, drives viewers through the historic town and national military park. As a result of this bevy of content, there were nearly 12 million video views on the Trust’s YouTube channel alone last year.

Inspiring one’s thirst for knowledge and exploration, the organization went even further than video ventures. One engaging tool was Virginia’s “Road to Freedom” tour, a physical map and digital app undertaken alongside Civil War Trails, Inc., that highlights nearly 100 spots across the Commonwealth that speak to the under-told Civil War-era Black experience. The two organizations also worked together to place new interpretive signs on the New Market Heights Battlefield, where 14 Black soldiers received the Medal of Honor, and Revolutionary War Brandywine Battlefield. Beyond physical interpretation, the Trust gathered its members on battlefields across six states for 27 “Twilight Tours” — to take advantage of warm summer nights while embracing stories from knowledgeable historians.

In striving to affirm battlefields as exceptional classrooms, the Trust has continued to keep students and teachers top of mind. In 2021, we offered two iterations of our Virtual Teacher Institute (in summer and fall), providing a free path for some 800 educators — across three continents — to professionally develop via our world class tools, brilliant experts and speakers, and their fellow colleagues. Meanwhile, more than nine million students have visited battlefields.org in the quest to learn more about our nation’s formative conflicts, including significant time spent viewing our new animated video series How We Became America: The Untold History, created in partnership with the Driving Force Institute for Public Engagement and produced by Makematic. Student interest in the progress-driven organization continues to grow through the Youth Leadership Team, which is now on its third cohort of history-enthused teens, all driven to bring the topic of battlefield preservation and education to classmates, neighbors and local decisionmakers.

Demonstrating our commitment to make the threads of America’s early conflicts easily intertwine with those of our present day lives, the Trust forged partnerships with likeminded organizations to deliver such relevance. We joined forces with the Daughters of the American Revolution to remember the valor of the founding generation as the nation prepares for the 250th anniversary of its founding in 2026. In South Carolina, The Liberty Trail blazed forward in terms of land preservation and initial interpretation, such as the groundbreaking of walking trails at Camden, Fort Fair Lawn, Waxhaws, Eutaw Springs and Hanging Rock. The Trust has also continued to showcase the deep connections that the modern military retains to its historic forebearers through its Warrior Legacy initiative, sponsoring the American Veterans Archaeological Recovery’s second archaeological dig at the Saratoga National Historical Park and declaring its intention to sponsor the group again at its upcoming February 2022 dig in Texas.

Battlefield preservation efforts have endured not only because of passionate organizations and donors, but largely because of bipartisan support for the issue among elected officials and decisionmakers. The Trust advocated for the successful passage of the Veterans in Parks Act, which provides free entrance to public lands for active-duty military and lifetime access to veterans and Gold Star Families. As a proud partner of the National Park Service, working with the agency on everything from the protection of historic landscapes to groundbreaking digital interpretation to orient visitors to historic sites, the Trust also lauded the confirmation of Charles Sams, III, as its new director. At the state level, we celebrated the creation of the Mississippi Historic Site Preservation Grant program during the Magnolia State’s 2021 legislative session. Additionally, North Carolina legislators appropriated $1.6 million in the state’s budget to preserve and restore its battlefield land. 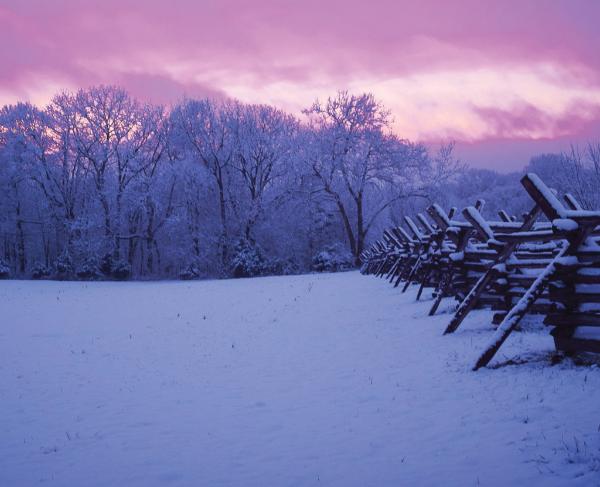