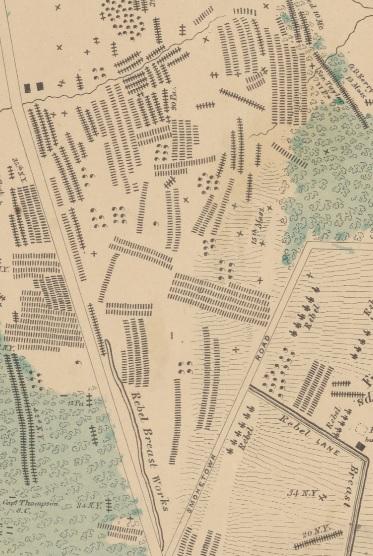 A portion of the S. G. Elliott Burial Map for the Antietam Battlefield—Cornfield & Epicenter Sector

At dawn on September 17, Maj. Gen. Joseph Hooker’s I Corps mounted a powerful assault on Robert E. Lee’s left flank from the Joseph Poffenberger farm near the North Woods, initiating the Battle of Antietam. Confederate artillery on Nicodemus Heights our shot and shell into Hooker’s right flank. Repeated Union attacks and equally vicious Confederate counterattacks swept back and forth across farmer David Miller’s 30-acre cornfield. Major General Joseph Mansfield’s XII Corps supported Hooker’s left, attacking Stonewall Jackson’s Confederates from the East Woods, Mansfield was mortally wounded near the Smoketown Road. Rebel dead lined the fences along the Hagerstown Pike as the Union infantry pushed south through the corn.  Brig. Gen. John Gibbon’s Iron Brigade of Wisconsin and Indiana regiments and Brig. Gen. George Meade’s Pennsylvania Reserves fought particularly hard along the Union right and center. Colonel Stephen D. Lee’s artillery battalion posted near the whitewashed Dunker Church blasted the flank of the Union attackers before being pushed back. Jackson fed more troops into the fray, calling on the undersized division of Brig. Gen. John B. Hood. In the ranks of Hood's division was the 1st Texas Infantry. This unit carried 226 men into the Cornfield that morning. By the end of the day, 186 men of the unit were casualties—an 82% casualty rate, one of the highest of the entire war.

This section of the Elliott Antietam Burial Map shows the sector of the final the Cornfield and Epicenter at Antietam. As one can tell by studying the Elliott Burial Map, this sector witnessed some of the most brutal fighting at Antietam. Members of the American Battlefield Trust helped to purchase the 44-acre Epicenter property in 2015. Upon examining the map in this sector, you will notice the disproportionate number of Union to Confederate burials as well as many scattered individual soldiers graves. Approximately 1,500 human and 40 horse burials are represented in this section of the map as well as 21 artillery pieces.