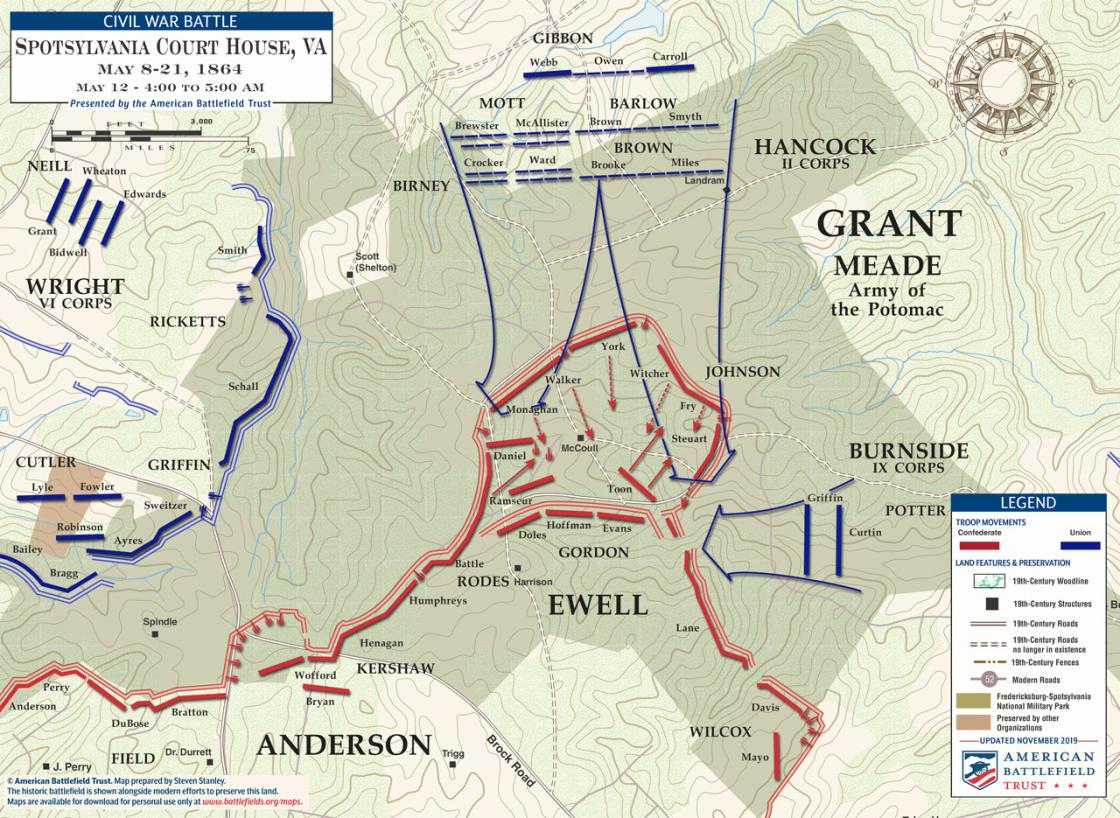 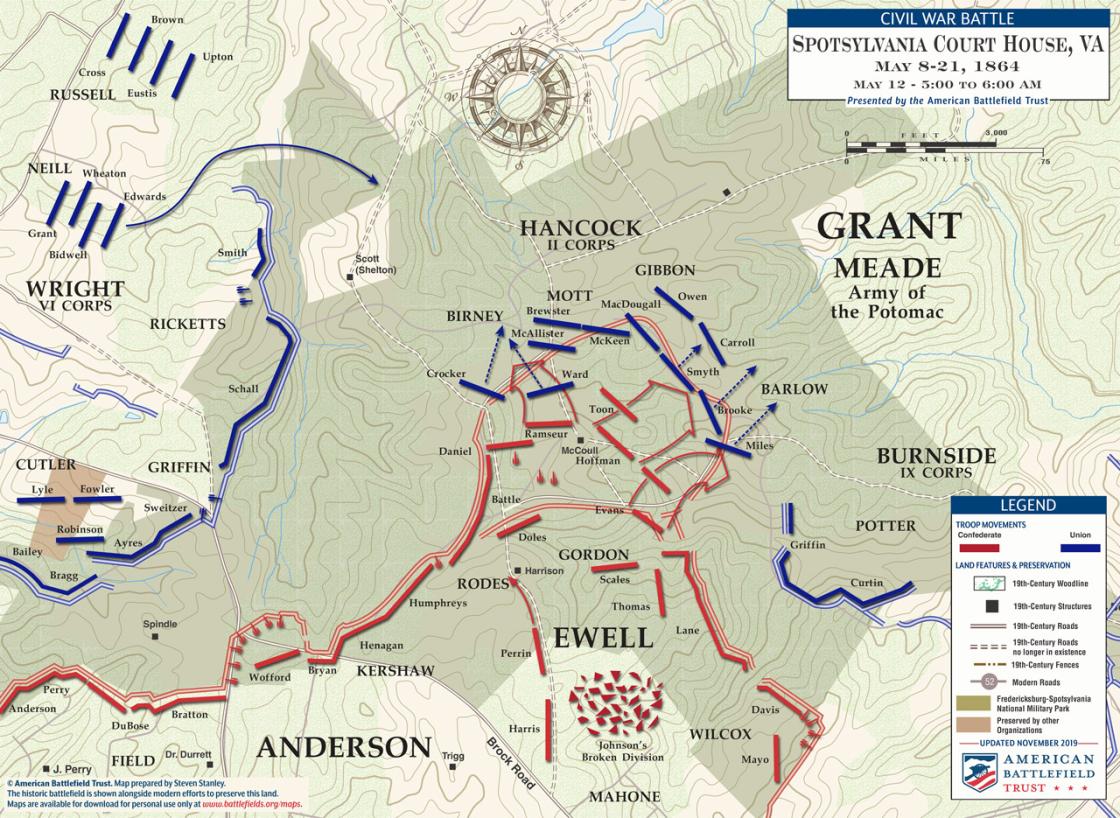 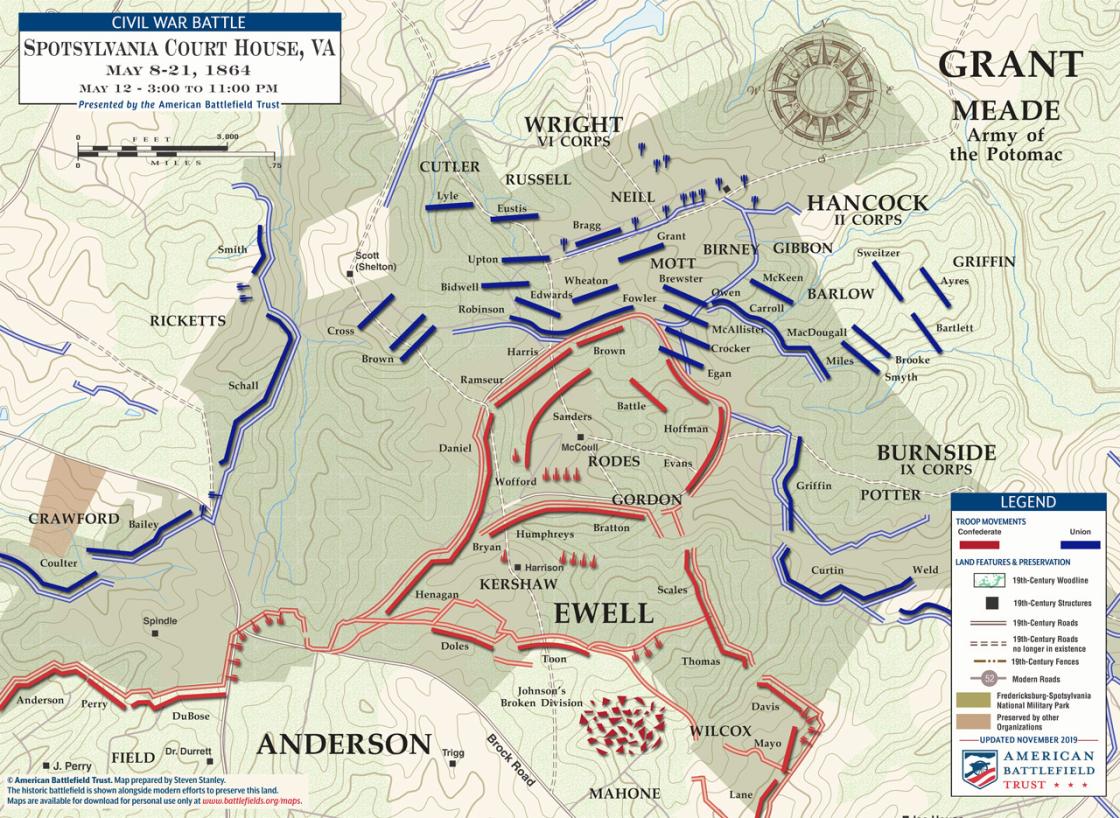 4:00 - 5:00 am: On the morning of May 12, 1864, the Union Army of the Potomac prepared to assault the Confederate Army of Northern Virginia positioned outside of Spotsylvania Court House, Virginia. Since May 5, the two armies had been locked in a titanic struggle—first in the Wilderness (May 5 & 6)—and now at Spotsylvania. On May 10, a Union assault broke through the Confederate fortifications. This attack on an area known as Doles Salient utilized a compact assault column on a narrow front, rather than a wide and shallow attack formation. Because of the success at Doles Salient, General Ulysses S. Grant ordered a major assault on the Confederate lines, utilizing a similar formation. Rather than utilizing an oversized brigade, Grant would employ an entire infantry corps. Grant intended to employ the 100,000 soldiers under his command to apply pressure along the Confederate lines so that the Rebels could not aid threatened portions of the lines, and in theory, the line would break under the sustained weight of the assault.

Near 4:35 am, some 20,000 men of the Federal II Corps stepped off toward the enemy position as dawn broke across the fields. The II Corps was deployed in a compact formation, and aimed for the tip of what the Confederates dubbed the "Mule Shoe." The Mule Shoe was a salient in the Confederate line that jutted dramatically northward toward the enemy—which exposed the defenders to attacks from three sides and converging artillery fire—while diluting the effectiveness of the defender's fire. It was a potentially fatal flaw that Maj. Gen. Winfield Scott Hancock and his corps exploited.

Hancock's men crashed into the main Confederate line around 4:50 am, initiating a 22-hour long battle. Union soldiers captured more than 3,000 Confederates, 20 cannons, and two general officers in the first hour of battle. More Federal soldiers attacked the eastern side of the salient. Commanded by Maj. Gen. Ambrose E. Burnside, the Union IX Corps waded the swamps and claimed rolling hills as it lent support to Hancock's men. But Grant's plan unraveled, as the western side of the salient was not attacked by the Union V Corps as ordered. Thus, Confederate General Robert E. Lee had a free hand to shift unengaged troops to the crisis point. Lee, too, ordered a new line one mile south of the Mule Shoe built to seal off the salient. But to accomplish this feat, Lee traded lives for time, and over the next 22-hours, Lee's men worked to hold their endangered line and thrust back the Federals who created a hole half-mile deep, and three-quarters of a mile wide in their lines.

5:00 - 6:00 am: Following the Union breakthrough of the Confederate Mule Shoe Salient at Spotsylvania Court House, Gen. Robert E. Lee worked feverishly to reestablish his defensive line. This was the second breach of the Rebel line over the last three days, and Lee set about trading lives for time, as his engineers established a new defensive line brimming with fortifications one mile south of the Mule Shoe. This new defensive line eliminated the large bulge created by the salient while shoring up the Confederate position near Spotsylvania Court House.

Meantime, the Federal offensive had reached its zenith. Lieutenant General Ulysses S. Grant ordered an assault along the entire Confederate line, this assault had not come to fruition on the Confederate left. Thus, Lee had a free hand to react to the Federals.

Rather than make counterattacks into the mass of Federals that lodged themselves into an area of the Confederate lines a half-mile deep and three-quarters of a mile wide, Lee worked to strike the edges of the Union lodgement. Georgians, North Carolinians, and Virginians struck the Federals on the left and right of the Mule Shoe. More reinforcements from Alabama and Mississippi were on the way. Lee himself tried to lead a counter-attack, the third counter-attack he attempted to lead over the last week—known as a "Lee to the Rear" incident. The Federals, who by now had lost the momentum and unit cohesion, began giving way. Foot by foot the Confederates retook much of the salient.

3:00 - 11:00 pm: By 3 pm, on May 12, 1864, the Union Army of the Potomac and Confederate Army of Northern Virginia had reached a stalemate. The Federals opened the day with a massive assault on the Confederate Mule Shoe Salient. Once the offensive petered out, Confederate counter-attacks wrestled away much of what the Federals had gained. All of the while the Confederate constructed a new set of fortifications at the base of the salient.

While the Confederates reclaimed much of their lost territory from the morning, a small strip of land was still held by Federals or was part of a no-man's-land. Ferroscius counter-attacks and intense small arms fire ruled the afternoon and evening, with neither side gaining an advantage. In the pouring rain, men stabbed with bayonets and clubbed one another with muskets. The site of the most intense action was dubbed the "Bloody Angle." Here an oak tree 22-inches in diameter was felled by small arms fire. The stalemate benefited Gen. Robert E. Lee and his army. They were buying time with lives. Around 3 am, the Confederates abandoned their forward position and took up residence in the new fortifications built at the base of the salient. The new Rebel line was nearly impregnable. After 22-hours of slaughter, and 17,000 casualties, neither army was any closer to victory. The battle of Spotsylvania Court House dragged on for another nine days. 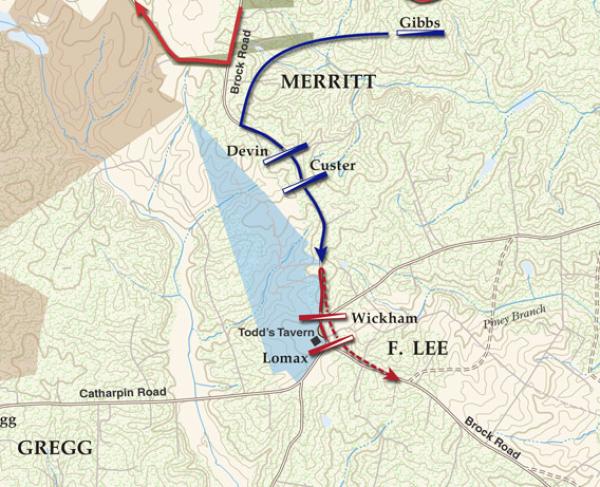 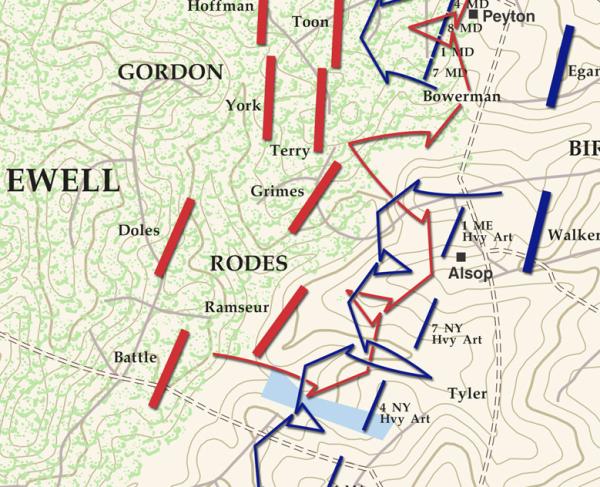 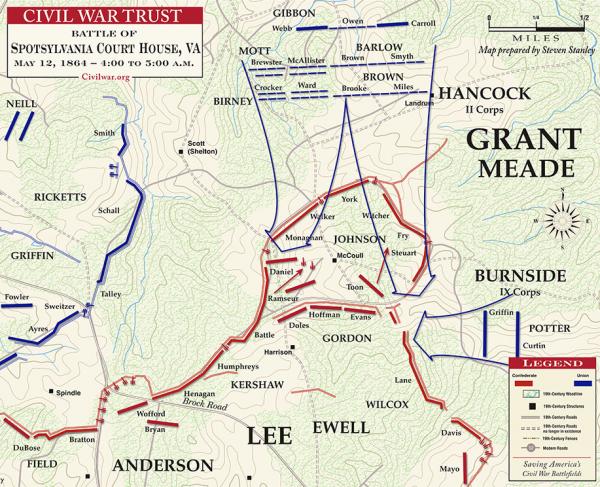