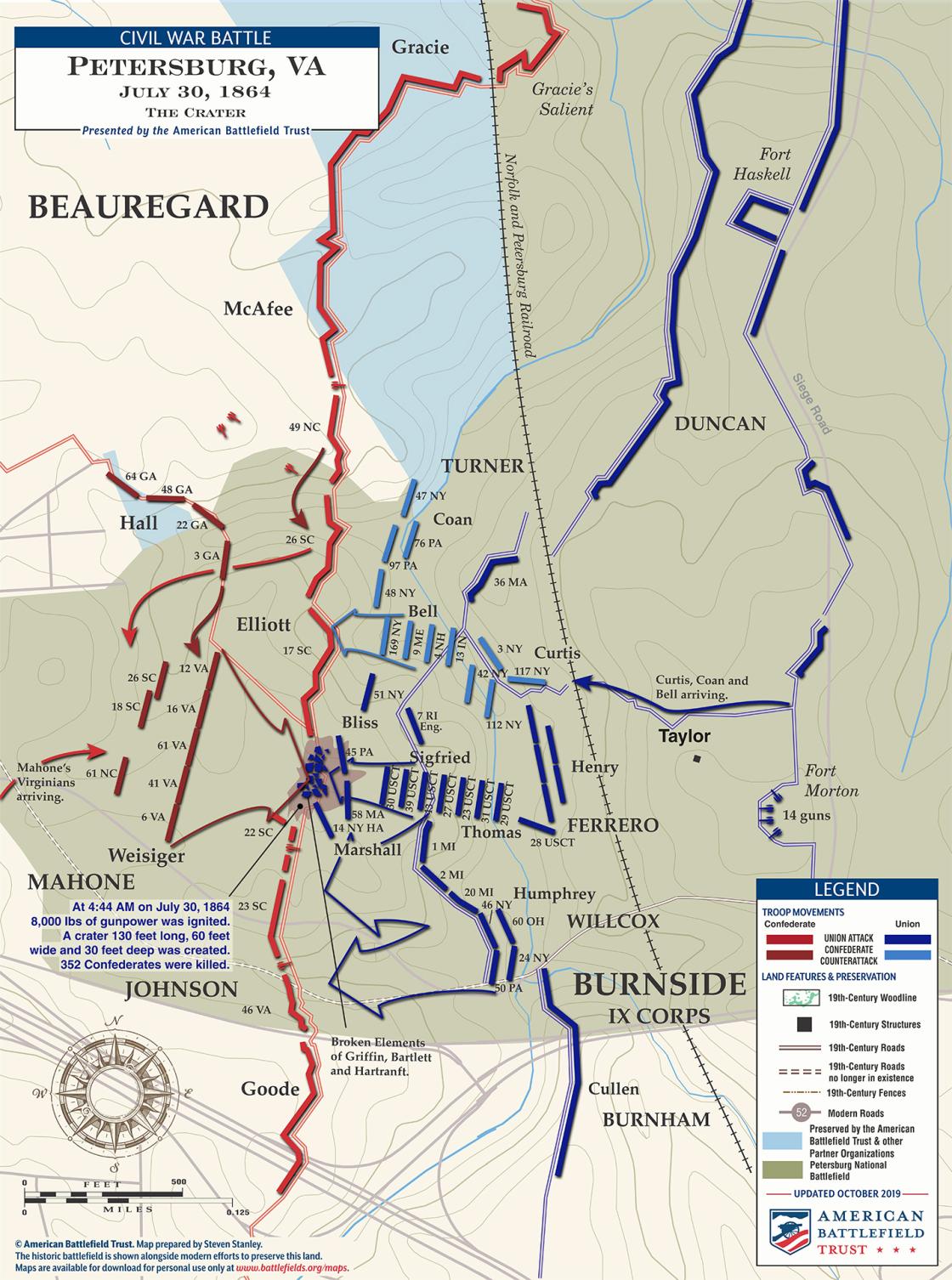 American Battlefield Trust’s map of the Battle of The Crater on July 30, 1864

Two weeks after the Union forces arrived outside of Petersburg, Virginia, the battle lines of both sides had settled into a stalemate. Since the Battle of Cold Harbor and the opening assaults on Petersburg, Union General Ulysses S. Grant was reluctant to mount a frontal attack against well-fortified Confederate positions. By late June, his lines covered most of the eastern approaches to Petersburg, but neither side seemed ready to risk a major offensive move.

As the siege wore on, and Grant’s men sought a way to break the impasse. Col. Henry Pleasants of the 48th Pennsylvania, a mining engineer by profession, saw a way to end the stalemate at Petersburg. Pleasants proposed to dig a mine running from the Federal lines and under Elliott’s Salient on the high ground within the Confederate line. A large gallery would be excavated and packed with black powder and ignited. This would blow a huge hole in the enemy line, opening a clear path to Petersburg. Pleasants began digging on June 25, completing a 510-foot shaft within three weeks. By July 27, the mine was packed with 8,000 pounds of gunpowder and ready to ignite.

At the end of July, Grant authorized the explosion. Spearheading the Federal attack was Ambrose Burnside’s IX Corps. Burnside planned to pass his leading division through the gap created by the explosion and then have his troops turn north and south, respectively, to widen the breach and clear the way. The IX Corps commander chose Brig. Gen. Edward Ferrero’s division of United States Colored Troops (USCTs) to spearhead the assault. Though these troops had spent most of their service guarding wagon trains and building fortifications, Burnside believed their enthusiasm and a chance to prove themselves in battle would compensate for their lack of combat experience. Each brigade in Ferrero’s division trained for its role in Burnside’s carefully choreographed scheme. On the day before the assault, however, General George G. Meade ordered Burnside to select a white unit instead, fearing the public image of sacrificing colored troops on what was certain to be a forlorn hope. Burnside had his division commanders draw lots for the job.

The mine exploded at 4:44 a.m. on July 30, 1864. The result stunned everyone who witnessed it. When the dust settled, a crater 130 feet long, 60 feet wide and 30 feet deep scarred the landscape where Elliott’s Salient had stood a moment before. A total of 352 Confederates were killed by the blast. The Federals, however, failed to widen the breach. Instead, many Yankee soldiers plunged into the Crater. The Confederate defenders on either side of the Crater recovered quickly after their initial shock and poured fire from both flanks into Burnside’s men. Eventually, the U.S. Colored Troops were fed into the fray, only to receive “no quarter” from the enemy. The Crater was a debacle. Burnside was treated as a scapegoat and relieved of command, and Grant would have to find another way into Petersburg.

Learn More: The Battle of The Crater