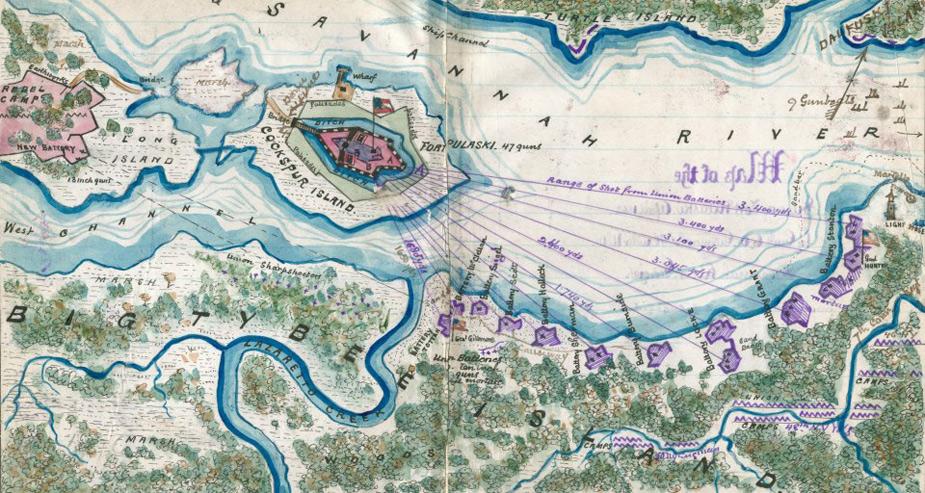 Historical map of the Battle of Fort Pulaski

Copy of official plan of the siege of Fort Pulaski. Cockspur Island. Savannah Georgia April 1862 : by Union forces under Genl Gillmore and Hunter.

Shows a detailed drawing of Fort Pulaski on Cockspur Island and the other Confederate fortifications on Long Island in the middle of the Savannah River. Union fortifications on Big Tybee Island are also indicated.

"Genl Gillmore opened fire on Fort Pulaski from 30 ten inch guns in battery 11th April concentrating his fire on the salient angle A and ravelin B which after 30 hours battering tumbled into the ditch dismounting the guns. When Col. Chas. H. Olmsted 1st Georgia Vls. C.S.A. - who commanded the fort - surrendered it with 47 guns - 70,000 shot and shell. 40,000 lbs powder and 3 months supply of provisions. The garrison of 360 men were made prisoners of war with Col. Olmsted. The fort was occupied by the Union forces while the Union gunboats blocked all further passage to Savannah. The fort had walls of brick 7ft thick at bottom 5ft at top with wet ditch 20ft wide. The foundations were laid 1832 by Mansfield and Renshaw. The fort could mount 102 guns - but 47 were mounted when captured by Gillmore and Hunter." -- Page caption.
Color coding indicates the location of Union and Confederate forces.