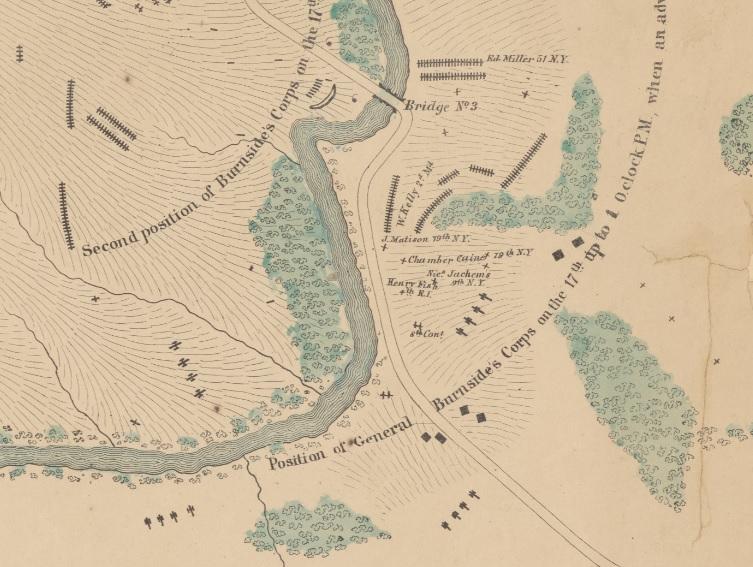 A portion of the S. G. Elliott Burial Map for the Antietam Battlefield—Burnside's Bridge Sector

Only five small brigades commanded by Gen. David R. Jones Confederate division were left to cover Robert E. Lee’s right flank along the Antietam Creek. Their position was good, facing open, rolling ground, that was difficult to attack across. This defensive position included Antietam Creek itself, and two 12 foot wide stone bridges arching across the creek. Maj. Gen. Ambrose Burnside’s IX Corps was intended to demonstrate against the Confederate right when the main attack further north began. However, McClellan’s orders for Burnside to move forward were not written until 9:00 am and were not received until around 10:00 am. Instead of a single headlong assault against the lower bridge, Burnside first attempted to flank the Confederates with a movement south by Brig. Gen. Isaac P. Rodman’s division. Rodman could not locate a suitable ford to cross the creek until well after noon. By then, two uncoordinated attempts to capture the bridge had failed. Around 1:00 pm, the 51st Pennsylvania and 51st New York charged across the bridge. For four hours, about 500 Confederates under Brig. Gen. Robert Toombs delayed Burnside’s 12,000 man corps, suffering about 120 casualties in the process.

This section of the Elliott Antietam Burial Map shows the sector around the Rohrbach Bridge, today dubbed Burnside's Bridge. On the map, the bridge is referred to as "Bridge No. 3," as there were three bridges spanning the Antietam during the 1862 battle. Upon examining the map in this sector, you will notice the disproportionate number of Union to Confederate burials as well as many scattered individual soldiers graves. Approximately 235 human and 2 horse burials are represented in this section of the map as well as 16 artillery pieces.