The Purple Heart: The Oldest Honor

The Badge of Military Merit, once associated with extraordinary service during the Revolutionary War, evolved into what we now know as the Purple Heart, a decoration synonymous with physical sacrifice.

The Modern Purple Heart award was established by General Order #3, signed by Gen. Douglas MacArthur on February 22, 1932, a date chosen to commemorate the 200th anniversary of George Washington’s birth. But beyond that symbolic origination, the very design of the medal — the profile of Washington, its heart shape and the purple color of the ribbon — speaks to the longer history of the award.

The story of the Purple Heart begins during the last year of the American Revolution. By 1782, Congress had forbidden General Washington from granting commissions to men as a reward for merit, as it could ill afford to pay existing officers, let alone additional ones. Washington however, felt strongly that the enlisted soldier needed to be recognized for his service.

Thus, on August 7, 1782, from his headquarters at the Hasbrouck House in Newburgh, N.Y., he created two awards with which to recognize the service of those in the Continental Army. The first award was the Honorary Badge of Distinction, intended to recognize faithful service. A single chevron, sewn on the left sleeve of the regimental coat, represented three years of faithful service, whereas two chevrons represented six or more years of faithful service. Those who merited this distinction were to be treated with respect. A practical application of that respect was that these men would be given priority for furloughs during the winter of 1782. 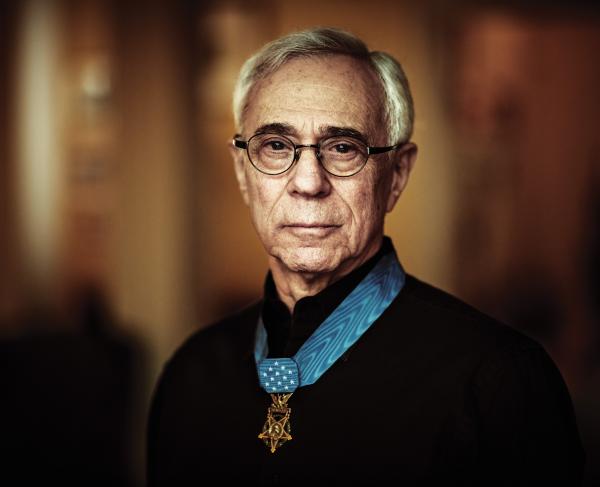 The second award, the Badge of Military Merit, was the one that was antecedent to and the inspiration for the modern Purple Heart. It was described in the orders as follows:

“…whenever any singularly meritorious action is performed, the author of it shall be permitted to wear on his facings over the left breast, the figure of a heart in purple cloth, or silk, edged with narrow lace or binding…. Men who have merited this last distinction to be suffered to pass all guards and sentinals which officers are permitted to do.”

It was the first award open to enlisted men (privates, corporals and sergeants), and was indeed limited to them. The distinction of passing the guards was considerable for its time, given the social hierarchy between officers and common soldiers.

The procedure was for regimental and brigade officers to nominate worthy candidates, along with proof of their deeds. Washington waited for nominations from August 1782 until April 1783, when he ordered a committee chaired by Brigadier General Greaton to meet and select candidates for the Badge of Military Merit. They met in the Temple Building at the New Windsor Cantonment and selected two sergeants from Connecticut: Sergeant Elijah Churchill, 2nd Continental (Sheldon’s) Dragoons, and Sergeant William Brown, 5th Connecticut, Continental Line (Infantry).

They were called to headquarters at Newburgh on May 3, 1783. As Washington was away on that date, it is unknown how they received their awards. One month later, on June 10, 1783, Sergeant Daniel Bissel was called to headquarters at Newburgh and was awarded his badge by Secretary Jonathan Trumball. Bissel is the last known verified recipient of the Badge of Military Merit.

Washington intended the award to be a permanent one. However, after the Revolution ended, it was all but forgotten.

The first time there was any serious consideration for reviving the award was in 1918. Gen. John Pershing sought to bring the award back to recognize merit for deeds done outside of combat. However, when World War I ended in November 1918, no further activity occurred until the late 1920s when Gen. Douglas MacArthur became the chief of staff of the army. After much discussion, the award was restored, but was quite different from the award we know today.

Like its predecessor, it was an award for merit, open solely to living recipients and was perceived as an army award. Merit was broadly defined, and being wounded was accepted as one type of merit. In addition, those who felt they qualified for the award had to submit an application for the Purple Heart. A result of those early procedures is that a majority of recipients during the first decade of the award’s existence were civilians, most being veterans of World War I.

The grounds where the National Purple Heart Hall of Honor is located are part of the medal’s history. On May 28, 1932, 137 veterans of World War I were awarded their Purple Hearts on this site. The tradition of recognizing sacrifice continues today with the Roll of Honor, a computerized database of enrolled Purple Heart recipients.

Another artifact of the “living veteran practice”is that a small number of veterans of earlier wars, notably the Civil War, applied for and were awarded Purple Hearts.

Today the Purple Heart stands as the oldest American military award: “Available to all, desired by none.”