The Civil War was a fiery prism at the center of American society. Every life entered the prism at its own angle and was refracted in its own way.
By Sam Smith  •  February 10, 2015  •  Updated February 23, 2022
The altered photograph at left is considered by many to be evidence of black Confederate soldiers. However, the photograph has been intentionally cropped and mislabeled. The photograph is presented in its original state at right, in which a Union officer is clearly shown. 1,500 free blacks formed the "1st Louisiana Native Guards" in the early days of the war, but they were ordered to disband by the Confederacy in January 1862. Some of the men of the unit later joined the Union Army. This photograph is of a Union U.S.C.T unit.
The University of Virginia

The lives of Southern black people changed immeasurably during the war years.  In the midst of a see-saw struggle that promised freedom as well as desolation, these men, women, and children made difficult and highly personal decisions in extraordinary circumstances.

Many Southern slaves took advantage of the fog of war to escape towards freedom.  Before the Emancipation Proclamation was officially adopted, these escapes usually meant congregating around the Union armies that were operating in Southern territory.  Vast columns of escaped slaves followed almost every major Union army at one point or another.  These people, sometimes called “contrabands,” as in “confiscated enemy property,” frequently served as scouts and spies for the Union soldiers.

When the Emancipation Proclamation took effect on January 1, 1863, Union forces had regained control of large swaths of the South.  Although many now claim that the Proclamation was effectively useless because it established policy for a foreign nation, the practical reality is that the Union, by force of arms, had every necessary power to establish policy in its occupied territories, just as Confederate armies exercised their power to capture and enslave free black people during their brief occupations of Northern territories.

After the Proclamation, the refugees in the contraband camps, along with free black people throughout the North, began to enlist in the Union Army in even greater proportion than Northern white men.  After some time in legal limbo, many Southern black men took up arms against their former masters and distinguished themselves on campaign and on the battlefield.  By the time the war was over, black soldiers made up 10% of the Union Army and had suffered more than 10,000 combat casualties.

Some black Southerners aided the Confederacy.  Most of these were forced to accompany their masters or were forced to toil behind the lines.  Black men were not legally allowed to serve as combat soldiers in the Confederate Army--they were cooks, teamsters, and manual laborers.  There were no black Confederate combat units in service during the war and no documentation whatsoever exists for any black man being paid or pensioned as a Confederate soldier, although some did receive pensions for their work as laborers.  Nevertheless, the black servants and the Confederate soldiers formed bonds in the shared crucible of conflict, and many servants later attended regimental reunions with their wartime comrades.

This is not to say that no black man ever fired a gun for the Confederacy.  To be specific, in the “Official Records of the War of the Rebellion,” a collection of military records from both sides which spans more than 50 volumes and more than 50,000 pages, there are a total of seven Union eyewitness reports of black Confederates.  Three of these reports mention black men shooting at Union soldiers, one report mentions capturing a handful of armed black men along with some soldiers, and the other three reports mention seeing unarmed black laborers.  There is no record of Union soldiers encountering an all-black line of battle or anything close to it.

In those same Official Records, no Confederate ever references having black soldiers under his command or in his unit, although references to black laborers are common.  The non-existence of black combat units is further indicated by the records of debates in the Confederate Congress over the issue of black enlistment.  The idea was repeatedly rejected until, on March 13, 1865, the Confederate Congress passed a law to allow black men to serve in combat roles, although with the provision “that nothing in this act shall be construed to authorize a change in the relation which the said slaves shall bear toward their owners,” i.e. that black soldiers would still be slaves.

Active fighting ended less than three weeks after the law was passed, and there is no evidence that any black units were accepted into the Confederate Army as a result of the law.  Whatever black combat service might have occurred during the war, it was not sanctioned by the Confederate government. Even beyond the Official Records, there is no known letter, diary entry, or any other primary source in which a Confederate mentions serving with black soldiers.

In the years shortly after the war, hundreds of prominent Southerners wrote and spoke about “the Lost Cause,” a vision of the war in which the South was fighting to secure state rights and in which slavery was a secondary concern.  None of these Southerners ever mentioned black soldiers fighting for the South, although it would have been a good time to present such evidence if there was any truth behind it.  The notion of widespread black combat service has only arisen within the past 25 years or so, long past the life-span of real veterans from either side, who would have immediately denied its legitimacy.

The modern myth of black Confederate soldiers is akin to a conspiracy theory—shoddy analysis has been presented, repeated, amplified, and twisted to such an extent that utterly baseless claims of as many as 80,000 black soldiers fighting for the Confederacy (which would roughly equal the size of Lee’s army at Gettysburg) have even made their way into classroom textbooks.  It is right to study, discover, and share facts about the complex lives of 19th century black Americans.  It is wrong to exaggerate, obfuscate, and ignore those facts in order to suit 21st century opinions. 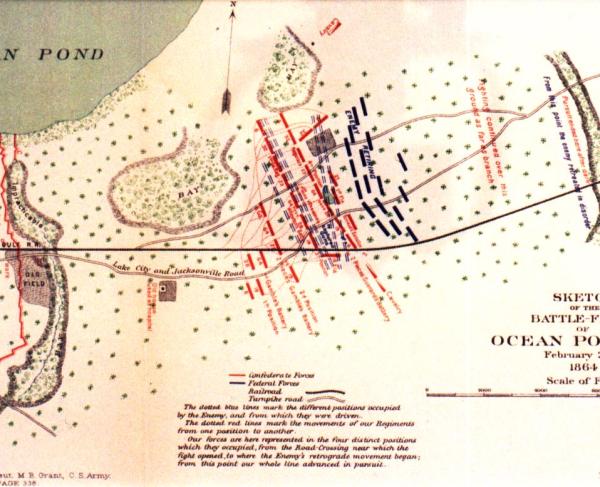 The Battle of Olustee