158 Years after Mighty Armies Clashed at Perryville, the State Park Commemorating Their Struggle Is Poised to Grow by Hundreds of Acres

(Perryville, Ky.) – In a typical autumn, the history community turns its eyes to Perryville, Ky., for one of the most anticipated living history and battle commemoration events of the year. While public health concerns make such a large gathering inadvisable in 2020, by the time history lovers are next able to gather for anniversary events, Perryville Battlefield State Historic Site will be substantially bigger, thanks to the pending transfer of 384 acres from the American Battlefield Trust to the Commonwealth of Kentucky through the Kentucky Heritage Land Conservation Fund (KHLCF). The site is managed by the Kentucky Department of Parks with assistance from the Office of Kentucky Nature Preserves. These lands, purchased by the Trust in a number of individual transactions and restored through the removal of modern buildings over the past 20 years, will represent the largest addition to the park since it was created in 1936.

“With the transfer of these important landscapes into Perryville Battlefield State Historic Site, the park will be one of the most complete historic landscapes of its kind,” said Trust President David Duncan. “The work done by the Trust — alongside partners at the federal, state and local levels — has made Perryville one of the most ‘complete’ battlefields of the Civil War and this transfer will even further enhance a tremendous park.”

In all, the Trust has protected 1,150 acres at Perryville  — 113 of which have previously been transferred from the nonprofit to the park — representing roughly half of all work done by the organization in Kentucky. Nearly all this work was completed through cooperative efforts – including matching grants from the federal American Battlefield Protection Program, logistical support from the Commonwealth of Kentucky and the support of the Boyle County Fiscal Court. The Commonwealth has a deep and demonstrated commitment to battlefield preservation, creating the Kentucky Battlefield Preservation Fund during the 2020 legislative session.

“This large-scale addition to the Commonwealth’s holdings at Perryville will be a boon to all Kentuckians,” said Zeb Weese, executive director of the Office of Kentucky Nature Preserves and chairman of the KHLCF Board. “Generations yet to come will visit these lands to absorb their historic legacy, marvel at their natural beauty and appreciate the rare species habitat they support. Perryville Battlefield protects one of the most significant Monarch butterfly populations in our system, and is an outstanding destination to watch birds — from Bald eagles to Henslow’s sparrows. We are thankful to the American Battlefield Trust for its work in helping safeguard our Kentucky heritage.”

Energy and Environment Cabinet Secretary Rebecca Goodman called the pending parkland addition significant for Kentuckians. “I am grateful for the collaborative efforts of the American Battlefield Trust and the Commonwealth of Kentucky through the Kentucky Heritage Land Conservation Fund (KHLCF),” Goodman said. “Preserving our natural heritage through these land acquisitions is essential.”

The addition of these lands to the park stands to have great economic, recreational and environmental benefits for the region and the state. For example, a 2018 economic study commissioned by the Kentucky Civil War Sites Association found that battlefields and historic sites were key draws for visitors to the state and other industry analysis demonstrates that such heritage tourists who stay overnight spend $458 per household per trip. The new lands will, for the first time, connect the park with the Chaplin River — a 79-mile river considered a small mouth bass fishing destination — enabling river access for kayaking, canoeing, and fishing. The 2019 Kentucky Outdoor Recreation Economy Report indicates that Kentucky generates a total of $12.8 billion in consumer spending, 120,000 in direct jobs, $3.6 billion in wages, and $756 million in taxes annually from outdoor recreation. Kentucky’s natural areas provide non-consumptive wildlife-watching recreation for 1.3 million people in the Commonwealth, including an estimated 827,000 birdwatchers to rural communities, and providing an estimated $773 million to local economies. Other environmental benefits include forested watershed and rare species habitat protection, including threatened and endangered species of bats and insects.

“During the Civil War, military leaders on both sides understood the significance of maintaining strategic control of Kentucky,” said State Rep. Daniel Elliott, who was the lead sponsor of the legislation to create the Kentucky Battlefield Preservation Fund. “In the same way, my fellow legislators clearly grasp the myriad reasons why battlefield preservation is a worthwhile investment for the Commonwealth of Kentucky. We are eager to continue working to create public-private partnerships that will ensure the protection of these important landscapes.”

The 384 acres to be transferred by the Trust represent six properties valued at $2.5 million and located across the battlefield. Areas to be transferred include: the site known as the “Nut Cracker,” where the extreme right flank of Maj. Gen. Alexander M. McCook’s Union corps and was crushed between the Confederate Brigades of Patrick Cleburne and Daniel Adams; the location of the Widow Reynolds cabin and “Squire” Henry P. Bottom’s barn, where many wounded men seeking shelter from the battle died in the flames; the “Slaughter Pen,” where ferocious fighting erupted late in the day as the Union recaptured and held the Dixville Crossroads; the north face of Parsons’ Hill, known as the “Open Knob;” and the site of the John C. Russell house, which served as the headquarters of General McCook. Numerous landscape restoration projects on the Trust-preserved lands have been completed thanks to the enthusiastic support of the nonprofit group, Friends of Perryville Battlefield.

The Trust and the Commonwealth reached a preliminary agreement regarding the transfer of all properties in July 2019, when the Kentucky Heritage Land Conservation Fund approved a $400,000 grant to acquire this acreage from the Trust. The Trust and the Commonwealth are in the process of finalizing all necessary due diligence steps to complete the transfer process. These steps are anticipated to be completed in the coming months.

“Being able to incorporate these key portions of the Perryville Battlefield into our interpretation of the engagement will greatly enhance the visitor experience,” said Bryan Bush, Perryville Battlefield State Historic Site park manager. “I look forward to seeing how ongoing preservation work further deepens our understanding of history.”

The Battle of Perryville on October 8, 1862, was fought between the Union Army of the Ohio, commanded by Maj. Gen. Don Carlos Buell, and the Confederate Army of Mississippi, commanded by Gen. Braxton Bragg. Lasting five hours, the battle was among the most ferocious of the Civil War with over 7,000 total casualties. While the battle was a tactical victory for the Confederacy, it was an important strategic victory for the Union that left Kentucky in Union hands for the remainder of the war. 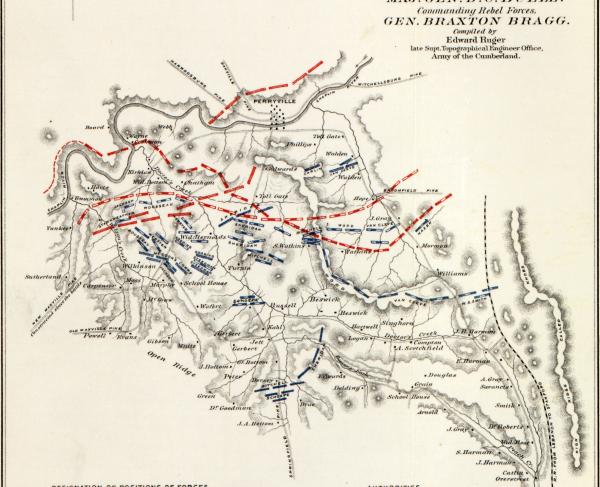