The Battle of Fort Ann on July 8, 1777, was a British victory, but was remarkably advantageous for the Patriots because it hindered the progress of the British Saratoga Campaign.

British victory. While the Patriots had successfully outnumbered and surrounded the British, the Patriots ultimately retreated to Fort Ann and then to Fort Edward when they were deceived into believing that enemy reinforcements were preparing to surround them. Regardless, the Patriots successfully delayed British movements toward Saratoga and ensured an American victory there.

During the summer of 1777, the British were in the midst of their Saratoga Campaign, a plan to subdue the Patriot rebels in New York, and were making their way through New England, defeating rebel armies and capturing forts. After British Gen. John Burgoyne overtook Fort Ticonderoga on July 6, he forced the Continental troops to retreat and reconvene in a defensive perimeter near Fort Ann. The British then set their sights on capturing the fort.

On July 6, 1777, British troops forced a group of outnumbered Patriots to retreat from Fort Ticonderoga without firing a shot. The evacuated Continentals then divided into two groups, each group fighting against the pursuing British over the following two days. One group fought in the Battle of Skenesborough near Lake Champlain on July 8, and the other fought in the Battle of Hubbardton, a land battle, on July 7. After these subsequent battles and the division of troops, Capt. James Gray reorganized 220 Patriots and led them south, through the forest towards Fort Ann, located in the mountains of New York.

The British 9th Regiment of Foot, led by Capt. John Hill, followed the reorganized Continentals with orders to defeat them and capture Fort Ann. On the morning of July 7, Gray and his men formed a defensive line to the north of Fort Ann. Although the Continentals were exhausted and hungry after leaving their supplies at Fort Ticonderoga, their morale was boosted when 400 Patriot reinforcements arrived, led by Col. Henry Van Rensselaer, joining the effort to defend the Fort.

On the morning of July 8, the battle for Fort Ann began. This battle, in its entirety, lasted 4 hours. When the British forces arrived, the Continental troops greatly outnumbered the British due to their reinforcements, courtesy of Col. Van Rensselaer. The battle was fought in thick woods, which hindered both mobility and visibility on both sides. The Patriot troops were successful in maneuvering throughout the landscape and surrounding the British flanks, leading the British to send out for reinforcements. The British, still led by Capt. John Hill, saw some improvement in their outlook when they moved onto a wooded hill.

Although the British were outnumbered and the Patriots had high morale, the tide turned in favor of the British after the success of a deception tactic. British Capt. John Money attempted to rally a strong group of Native American reinforcements but was only successful in organizing a small group. Regardless, Money and his group rushed ahead and began shouting war cries. The outbursts were heard by the Patriots, who, upon hearing these shouts, retreated to Fort Ann, believing that they were going to be outnumbered.

When the Patriot forces arrived at Fort Ann, they were convinced that they had been victorious in the battle, despite their retreat. However, they discovered that they were running extremely low on ammunition and saw that a large group of British reinforcements were incoming. Determining that they could not maintain a defense, the Patriots abandoned Fort Ann and retreated to Fort Edward nearby. Although it was tactically a British victory, the Battle of Fort Ann was beneficial to the Patriots, as it delayed Gen. John Burgoyne in his march toward Saratoga, which contributed to an American victory there. After the victory at Saratoga on October 17, Patriot morale was revitalized, and French intervention was secured.

1. How did the Battle of Fort Ann disrupt the Saratoga Campaign?

In 1777, the British established a strategy to take over New York, moving through the Hudson River Valley with a three-pronged attack. British Gen. John Burgoyne led troops throughout the Hudson River Valley, capturing Fort Ticonderoga and defeating Patriot forces in Vermont and New York. After his forces pursued and fought Patriot forces at Fort Ann, they were delayed in moving south towards Saratoga due to supply difficulties after fighting. Meanwhile, the Patriots in Saratoga at the time, including Gen. George Washington, were aware of the British movements towards them and were able to call for reinforcements and form defenses in preparation during this delay. After the British were defeated at Saratoga on October 17, the British campaign failed, and the war turned in favor of the Patriots.

2. Why was the victor at the Battle of Fort Ann a point of contention at the time?

The Battle of Fort Ann was a British victory; however, the Patriot forces also claimed victory. The British thought they were victorious not only because they had stood their ground, but because they also successfully captured Fort Ann and forced the Continentals to retreat. The American forces claimed victory because they were under the impression that they had become close to forcing a British surrender. However, because British reinforcements were arriving at the end of the battle and because the British did not surrender, it cannot be marked as a Patriot victory. Even though it was a British victory, the battle aided the Patriot cause as it slowed British movements towards Saratoga, where the British eventually surrendered on October 17, 1777. 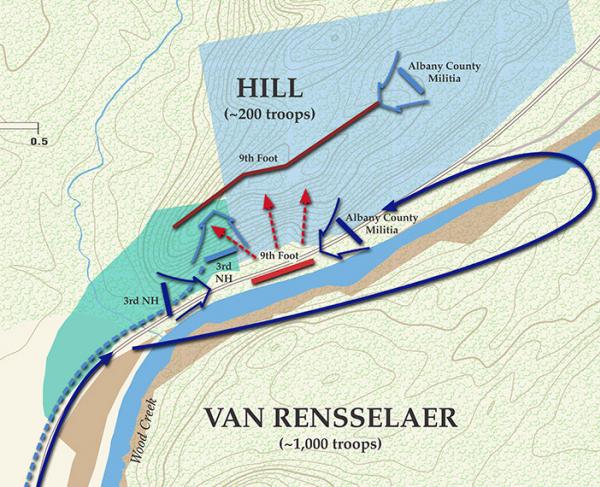