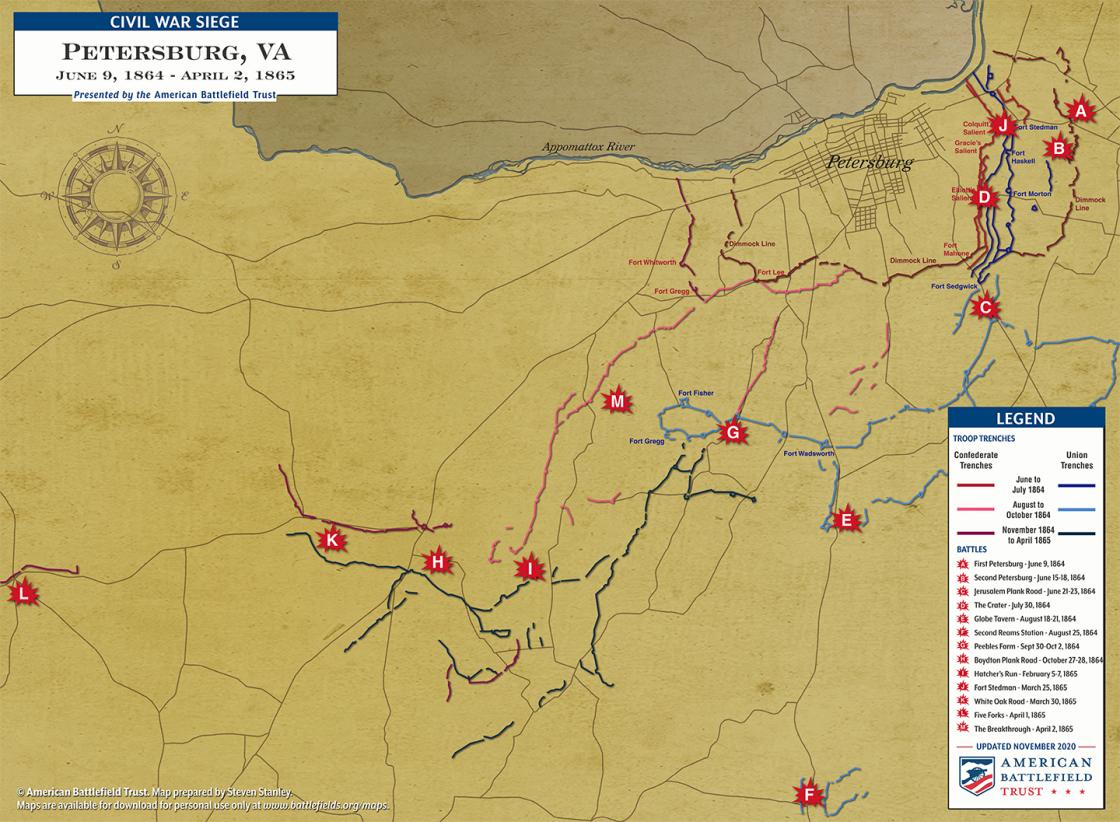 The 292-day Siege of Petersburg was the longest siege in United States military history. While the siege was initiated on June 15, 1864, the Federal attackers sought a quick victory—the capture of the vital rail and road center of Petersburg, Virginia—some 23 miles south of the Confederate capital of Richmond. If Petersburg fell, the supply system feeding the Rebel capital would crumble, and the Yankees could easily capture Richmond while isolating the Confederate defenders from supplies and reinforcements from the Deep South.

Initial Union assaults (June 15-18) along what became known as the "Eastern Front," failed miserably, and Union Gen. Ulysses S. Grant positioned his armies for a siege of the "Cockade City." Grant hoped to bottle up Confederate Gen. Robert E. Lee through siege operations so that the veteran Southern commander could not break out and wreak havoc on Federal forces prior to the 1864 presidential election.

Throughout the summer and fall of 1864, the two sides extended their siege lines north toward Richmond, and south and west toward Dinwiddie County. The Federals sought to stretch the Confederate line to its max, which the Federals could break at some weak point—while capturing or severing the vital roads and railroads—running in and out of the city.

On July 30, 1864, Federals exploded a mine packed with black powder under the Rebel siege lines. The explosion created a massive crater in the ground, and into which thousands of Union soldiers charged, only to be slaughtered themselves. More successful Union actions severed the Jerusalem Plank Road and the Weldon & Petersburg Railroad.

By early 1865, the Federal effort to overextend the Rebel lines nearly reached its goal at Hatchers Run and White Oak Road. On March 25, 1865, the Confederates made a desperate attempt to break out of the siege through an assault at Fort Steadman. After initial success, the Federals drove back the Confederate attackers. Less than a week later, the overextended Confederates were defeated at Five Forks, where they lost a vital road junction that opened the soft underbelly to their last rail line, Southside Railroad.

On April 2, 1865, a general assault along the Confederate lines by the Federals finally scored the "Breakthrough," that was so long sought after. That night, Lee ordered Petersburg and Richmond evacuated, and what was left of the Confederate armies in the region streamed west toward Appomattox in a vain attempt to link up with Confederate Gen. Joseph Johnston's forces operating in North Carolina.