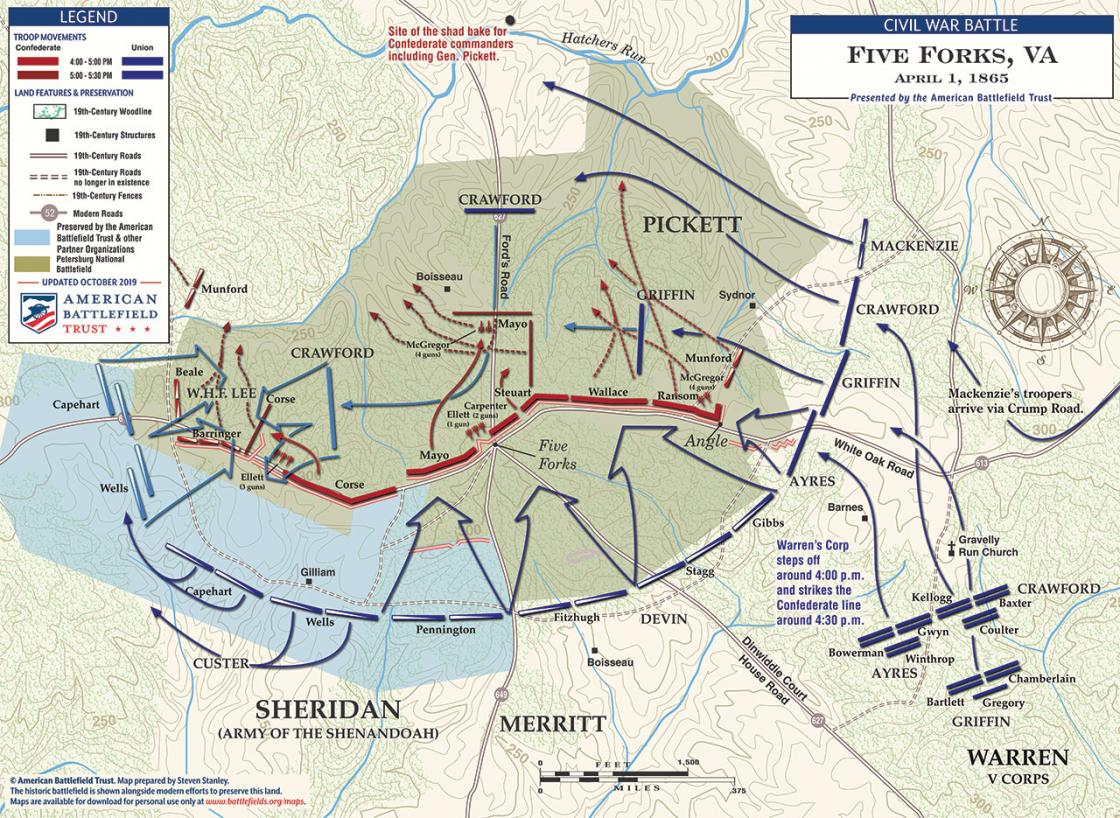 American Battlefield Trust's map of the Battle of Five Forks on April 1, 1865

In the spring of 1865, Lt. General Ulysses S. Grant had an opportunity to force Confederate General Robert E. Lee’s Army of Northern Virginia out of its entrenchments at Petersburg, Virginia, by threatening its last supply line, the South Side Railroad. Grant ordered Maj. General Philip Sheridan and his cavalry to advance on the railroad by way of an important road junction known as Five Forks.  Lee countered this move by ordering Maj. General George Pickett with his infantry division and cavalry under Gen. Fitzhugh Lee, Thomas Munford, W.H.F. "Rooney" Lee, and Thomas Rosser to hold the vital crossroads “at all hazards.” After discovering the Confederate force, Sheridan secured infantry support from Maj. General Gouverneur K. Warren’s V Corps. After briefly stalling the Union advance at Dinwiddie Court House on March 31, Pickett withdrew his command to Five Forks and fortified his position.  The next day, while Sheridan’s cavalry pinned the Confederates in position, the V Corps assaulted the Confederate left flank and rear, turning their position and taking scores of prisoners.  Pickett, who was attending a shad bake when the fighting began, was unaware that a battle was underway until it was too late.  Sheridan, meanwhile, personally directed the Union attack, often exposing himself to personal danger while rallying the troops. Union Brig. General Frederick Winthrop was killed; “Willie” Pegram, beloved Confederate artillery officer, was mortally wounded.  Though the V Corps had performed well, Sheridan was nevertheless dissatisfied Warren’s performance during the battle and relieved him of command.

The resounding Union triumph heralded the end of the stalemate outside Petersburg and set the stage for the breakthrough that followed the next day.  On April 2, Lee informed Jefferson Davis that Petersburg and Richmond would have to be evacuated.  Lee surrendered to Grant only seven days later.

Explore the Battle of Five Forks