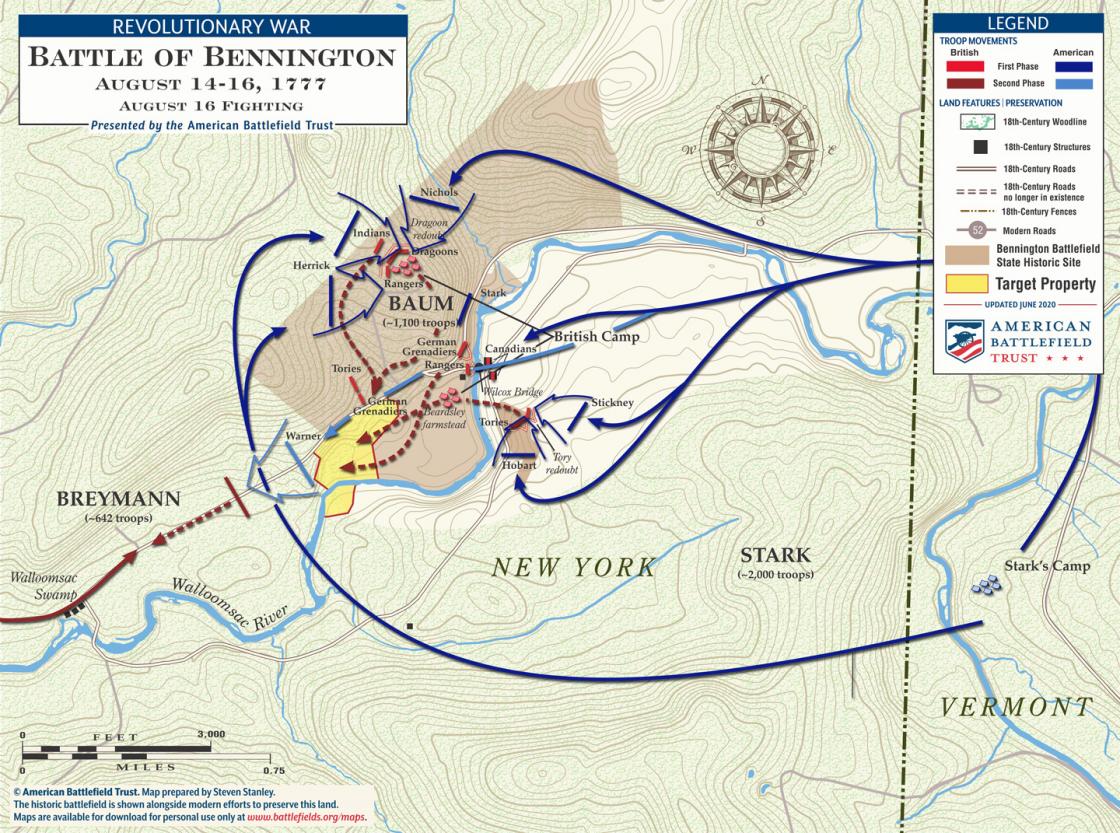 Battle map of the Battle of Bennington - August 16 Fighting

In the summer of 1777, British Gen. John Burgoyne’s army moved south from Canada as part of the overall British strategy to divide New England from the rest of the rebellious American colonies. The British commander’s army was slowed by poor roads as well as trees and other obstacles strewn along the route by the Americans. Burgoyne’s supply line was stretched thin, forcing the general to explore opportunities to replenish his forces. When Burgoyne learned of horses and supplies in Bennington, Vermont – south of his position and east of the Hudson River – the 55-year-old commander divided his army, sending German, British, Loyalist, and Native American forces toward Bennington under the leadership of Lt. Col. Friedrich Baum.

As Baum’s troops moved southeast, local militia units learned of his activity and began to prepare for action as the bulk of the American forces in the area pulled back under attack by Burgoyne’s vanguard.

American forces led by Gen. John Stark, a hero of the Battle of Bunker Hill and a veteran of the Battle of Trenton strode out for battle. Patriot and Loyalists assembled in support of both Stark and Baum. Finally, on August 16, 1777, after a day of non-stop rain, Baum’s command was attacked by over a thousand American militiamen in Walloomsac, New York, about 10 miles from Bennington.

Hoping that poor weather might delay an American advance and that reinforcements from Burgoyne would soon arrive, Baum’s troops had constructed a small redoubt on a hill. When the weather cleared on the afternoon of August 16, the Americans made their move. Unfortunately for Baum, he was duped by men entering his camp professing to be Loyalist recruits. Some of them turned out to be Stark’s militiamen, whose aim was to gather intelligence and report back to their commander.

After heavy fighting, American forces were able to breach their enemy’s small redoubt. Within a short period of time, Patriot forces had Baum and his men surrounded. Many of his Native and Loyalist allies fled in the heat of the battle. Baum himself was mortally wounded leading his Germans in dogged resistance on the little knoll, where they were overrun.

The battle continued until nightfall when darkness brought it to a halt. Unfortunately for Baum, his reinforcements arrived just after the battle. Burgoyne’s detachment suffered more than 200 dead and seriously wounded; more than 700 were taken prisoner or missing. American casualties were about 70.

The Battle of Bennington was the precursor to the defeat of Burgoyne’s army two months later at Saratoga, turning the tide of war in favor of the Americans.

Learn More: The Battle of Bennington