American Veterans Archaeological Recovery (AVAR) was founded in 2016, the brain-child of two veterans who came to believe in the power of this interactive experience to empower former servicemen and women, and aid them in their reintegration into civilian society. While any veteran or active duty personnel, regardless of branch of service, is eligible to register for AVAR-sponsored projects, the majority of participants are veterans with a disability rating for service-related physical and mental health disabilities.

The organization is inspired by Operation Nightingale™, a British program of the Defence Archaeology Group under the Ministry of Defence (MOD) that partners professional archaeologists with wounded, injured or sick service personnel to excavate sites on MOD-owned properties. This is a significant mission, as MOD owns approximately one percent of the United Kingdom mainland, including 777 scheduled monuments and portions of 10 UNESCO World Heritage Sites — including Hadrian’s Wall and Stonehenge. The Ministry’s work is often supported by Breaking Ground Heritage, and after being invited to participate on one of these digs during his doctoral studies in the United Kington, AVAR CEO Stephen Humphreys knew that a similar program would also thrive in America.

A typical archaeological project involves many volunteers who have no prior dig experience. By placing veterans in these volunteer spots, the corps is instantly imbued with traits that commonly exist in those who have served in the military in  quantities exceeding the general population — outstanding work ethic, tolerance for difficult physical conditions, precision in following intricate directives. Thus, veterans make natural archaeologists — in fact, there is a long tradition of famous figures  moving between the two fields.

But AVAR goes further than simply capitalizing on this natural inclination. Whereas even the most community-based conventional expedition is primarily focused on how its amateur participants can benefit the professionals and advance the research, an AVAR project seeks the reverse: It uses the experience to benefit these volunteers. It’s a concept AVAR calls “rehabilitation archaeology,” which, at its heart, is  about capturing what archaeology can do for people, not what these people can do for archaeology.

Most existing veterans therapy programs provide a single enjoyable experience, which is beneficial in its own way. But AVAR provides a long-term commitment to send veterans home from a dig with more than great memories. Participants progress through three tiers of involvement with the organization as they acquire real-world skills and expertise applicable in a variety of vocations. This clear progression is reminiscent of military ranks, a type of categorization that veterans miss in civilian life. The tiers aren’t designed to produce professional archaeologists, but they can provide a great foundation for anyone who decides to pursue that path. Instead, AVAR focuses on building individu-als’ confidence and giving them awareness of the significance of archaeology and historic preservation.

Tier 1 (or Core) projects — like the one detailed in this issue at Saratoga — are an ideal entry point for new AVAR participants. No prior experience or working knowledge of archaeological techniques is necessary. Here, they work as part of a large team of veterans alongside the full spectrum of AVAR specialists, who can assess an individual participant’s physical and psychological needs. Participants receive one-on-one mentoring to establish their goals for the project and how they can use their time to build applicable real-world skills they can use long after leaving the field. These projects are ideal for veterans who are still becoming accustomed to civilian life, who want to recapture some spirit of their time in uniform while discovering tangible ways they can use existing skills to further a cause. Emphasis is placed on providing a strong foundation in archaeological tech-niques, including cutting-edge technologies, under the guidance of recognized technical experts who are present at every stage of the expedition. All Tier 1 projects have been located in the United States, but Saratoga was the organization’s first opportunity to dig on an American battlefield; previous sites include the Shaker settlement at Mount Lebanon, N.Y.

Some participants may wish to only join Tier 1 projects, but those who show deep interest in the field of archaeology and the AVAR mission may move on to Tier 2. These recon excavations place veterans in more exotic locations — often outside the United States — based on their specific interests and abilities. AVAR incorporates cultural immersion activities into these excavations, so that our veterans build friendships with our host country partners while they act as ambassadors for the United States military veteran community.  Recon excavations prioritize skills progression, exposure to new cultures and development of expertise in peer support. After completing the Saratoga project in June 2019, the AVAR team went to the United Kingdom in September to work alongside numerous partners, including the U.S. Department of Defense POW/MIA Accounting Agency, to excavate the site of a 1944 B-24 aircraft crash. Another team joined the Beit Lehi Regional Project in Israel, in partnership with Hebrew University, the Israel Antiquities Authority, and the Beit Lehi Foundation.

Finally, Tier 3 (Solo) projects more fully integrate experienced AVAR veterans into the broader archaeological community by providing competitive scholarships to participate in projects of their own choosing. Those at this level have shown themselves capable of functioning without AVAR’s support and showcase the special skills that veterans bring onto a dig team. By funding their independent work, AVAR is giving these veterans a significant advantage in their pursuit of archaeology as a career or hobby, and welcoming them to a new phase in the AVAR community, where they become mentors to those beginning their journey in rehabilitation archaeology. In 2019, AVAR sent two accomplished diggers to assist at the Crow Canyon Archaeological Center in Colorado and another to Tel Abel Beth Maacah, Israel. 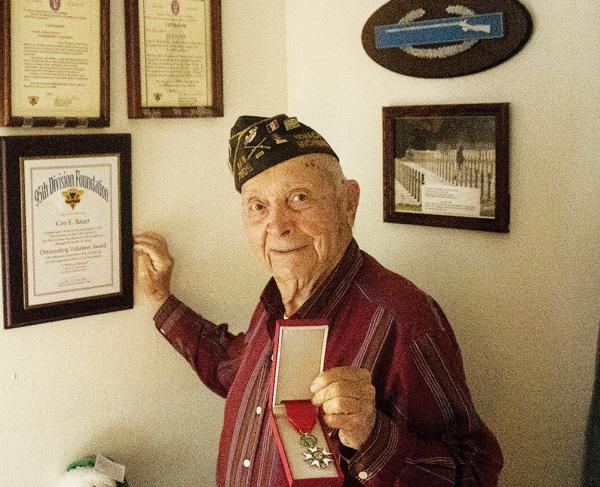