(Washington, D.C) — During events in Arlington, Va., and Charleston, S.C., to mark National Medal of Honor Day, the American Battlefield Trust (the Trust) and the Congressional Medal of Honor Society (the Society) today announced a new initiative to tell the inspiring and often harrowing tales of the brave Americans who have earned the Medal of Honor.

The Medal of Honor Valor Trail™ will weave the stories of the nation’s highest decoration for valor with the places most deeply connected with Medal of Honor recipients – battlefields and historic sites, hometowns and burial places, namesake sites, monuments and museums. The envisioned trail will span centuries — from the Civil War through the present — and continents, showcasing the diverse universe of inspirational recipients who have worn the Medal.

Visitors to ValorTrail.org may nominate relevant sites for inclusion in the growing network.

“There is no higher honor that our country can bestow than the Medal of Honor,” said American Battlefield Trust President David Duncan. “It is synonymous with the best of who we are as Americans and the ideals of valor, patriotism and self-sacrifice. But the dramatic stories behind the awarding of many of these medals are rarely told at the places where they unfolded.”

The Trust believes deeply in the power of place, the unique ability for landscapes and other spots to teach meaningful and compelling lessons to those who follow in the footsteps of history.

Similarly, the Society believes that their mission to promote the legacy of the Medal of Honor to help “Honor the Sacrifice” and “Inspire the future” is imperative to ensuring that we do not lose sight of the importance of values associated with the Medal and with America.

The new initiative is the outgrowth of an ongoing partnership between the Trust and the Society. They first sought to identify parallels between the stories of living Medal of Honor Recipients and those of the American Civil War, when the award was first introduced, and to bring them to the location of the battles these heroes of the 19th century fought. Then, recognizing inherent connections between story and place, the Trust worked with the Society in 2019 to create an interactive map on the Trust’s website that identifies all 1,500-plus Civil War citations, tying in biographical information – sometimes scant for these earliest awards – about the recipients.

The Medal of Honor Valor Trail™ will go much further, including recipients of all eras, as well as a wider variety of relevant sites, stretching far beyond battlefields to entice visitation and create points of community pride. It will demonstrate that although few Americans have the opportunity to visit Iwo Jima or the mountains of Afghanistan, those who sacrificed in such remote places are nonetheless in their thoughts at the battlefields, historic sites, cemeteries, museums and memorials that are accessible to them.

That feeling of connection, of a brotherhood of service, is felt throughout the military, and keenly among Medal of Honor recipients.

Upon visiting the Fredericksburg Battlefield with the Trust to trace the experience of Civil War soldier George Maynard, who likewise returned to heavy fire to help a wounded comrade, Britt Slabinski, a War on Terrorism recipient was deeply moved. “The bond between brothers-in-arms has remained unchanged across centuries. Standing on hallowed ground, I feel a connection to every one of those historic soldiers.”

Hershel “Woody” Williams, the final surviving Medal of Honor recipient of World War II, echoed the need to connect modern audiences to such spots. “We need these places to keep reminding us of those who gave more than any of us…. We, as a country, can’t forget. We should never forget what their sacrifices have made possible.”

The new Medal of Honor Valor Trail™ website, ValorTrail.org, is in the early stage of development but already helps visualize the way that valor will be put on a map. As it grows, the Valor Trail will help modern Americans connect with true heroes of the past. By inviting them to follow in the footsteps of heroes, it offers a new understanding of the significance of those events and a more deeply held appreciation for the very real and human people who lived through them. It offers us something to aspire to, the chance to live up to our highest promise and purpose as a nation and as individuals.

The American Battlefield Trust is dedicated to preserving America’s hallowed battlegrounds and educating the public about what happened there and why it matters today. The nonprofit, nonpartisan organization has protected more than 54,000 acres associated with the Revolutionary War, War of 1812, and Civil War. Learn more at www.battlefields.org.

The Congressional Medal of Honor Society is dedicated to preserving the legacy of the Medal of Honor and its Recipients, inspiring Americans, and supporting the Recipients as they connect with communities across the country. Chartered by Congress in 1958, its membership consists exclusively of those individuals who have received the Medal of Honor. Learn more at www.cmohs.org. 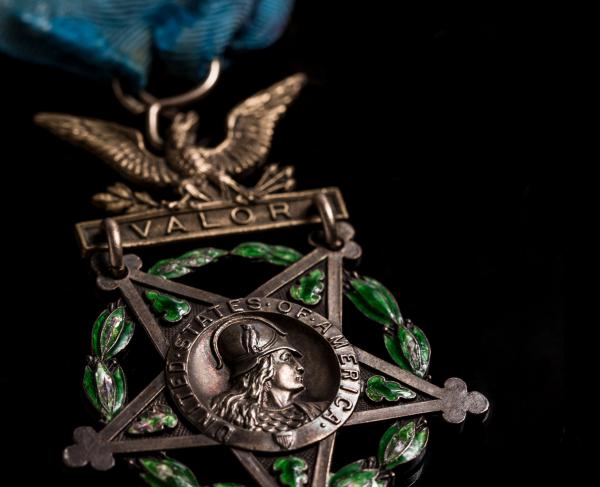 Designing the Medal of Honor