Charles, Lord Cornwallis captured Mount Pleasant, which produced the evacuation of Patriot posts at Lempriere’s and Wando. From the forks of the Wando River, he sent British reconnaissance patrols out to locate or impede Continental Army movements north of Charles Town, as well as forage and to plunder throughout St. Thomas Parish (Berkeley Co.). Lt. Col. Banastre Tarleton, learning of Patriot troop movements from a Loyalist at Ball’s plantation near Strawberry Ferry, raced his 150 men to Lenud’s Ferry crossing to gather further intelligence and to assess for himself the Patriot strength and situation.

Col. Anthony Walton White rested his 1st Continental Light Dragoons on the south side of the Santee River, together with Lt. Col. William Washington’s 3rd Continental Light Dragoons, awaiting the arrival of Col. Abraham Buford’s 3rd Virginia Detachment of infantry and an artillery company. They unbridled and unsaddled their horses. White supposedly requested boats to carry them across the river. White dismissed Washington’s precaution to cross the river and wait on the north side. Col. Abraham Buford’s 3rd Virginia finally arrived on the north side of the Santee River.

Tarleton pressed forward to strike, surprise and charge White’s and Washington’s Continentals at 3 p.m., hoping to repeat his catastrophic attack at Monck’s Corner the previous month. Tarleton reported the Americans, "being totally surprised, resistance and slaughter soon ceased...All the horses, arms, and accoutrements of the Americans were captured. Colonels White, Washington, and Jamieson, with some officers and men, availed themselves of their swimming, to take their escape, while many who wished to follow their example perished in the river." Buford’s Virginians could do little but watch the fight from across the wide water.  White, Washington and others escaped by swimming across the fast-moving river, while others fled into the riverside swamp.

Tarleton captured 100 horses. His 150 dragoons smashed and demolished the Patriot cavalry and freed 18 British prisoners held by Patriots since earlier in the morning action at Ball’s Plantation.

Cornwallis wrote that this action “totally demolished their [American] cavalry.”  Col. Harry Lee assessed: “…the second discomfiture of our cavalry, gave to the enemy the uncontrolled possession of all the country between the Cooper and Santee rivers, and extinguished the glimmering hopes that had been still entertained of the practicability of a retreat from the town.”

Both Lt. Col. Anthony Walton White and Lt. Col. William Washington went to Halifax, North Carolina to begin rebuilding their regiments. Washington leveled charges against White but he was exonerated by court martial.  Lt. Col. William Washington rebuilt and trained his new recruits in time to rejoin Major General Nathanael Greene in December of 1780. White raised new men, horses and supplies in Virginia and later rejoined Greene in the South in 1782. Sir Henry Clinton proclaimed on May 22, 1780, the confiscation of their property and consigning corporal punishment menacing all rebels who should be found in arms or resisting the Crown authority. Tarleton chased Buford and his Virginia Continentals for 138 miles and caught up with them at the Waxhaws, near the border with North Carolina. In a battle known as Buford’s Massacre, Tarleton eliminated the last known army of Continentals at that moment in South Carolina. 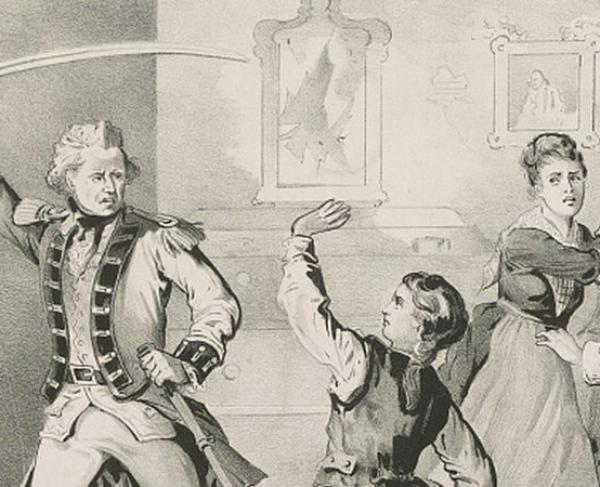 "Bloody Ban" in the Backcountry Commemorating the Battle of Lenud’s Ferry, fought on May 6, 1780, the Berkeley County Historical Society placed a historical sign near the...
Details and Itineraries »