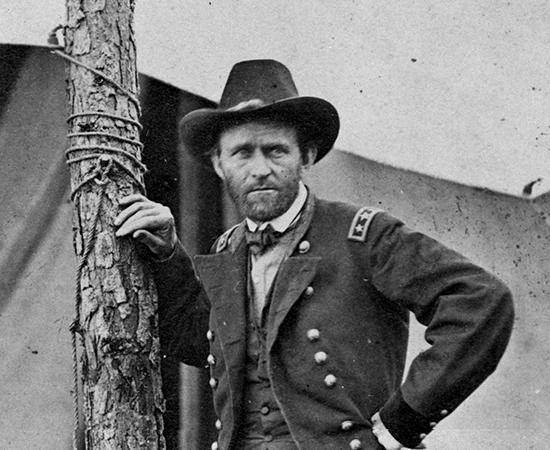 Born Hiram Ulysses Grant, in Point Pleasant, Ohio, the future General-in-Chief's name was changed due to a clerical error during his first days at the United States Military Academy at West Point.  To his friends, however, he was known simply as "Sam."  After a mediocre stint as a cadet, he graduated twenty-first out of the thirty-nine cadets in class of 1843.  Yet despite his less than exemplary school record, he performed well as a captain during the Mexican War (1846-1848), winning two citations for gallantry and one for meritorious conduct.  Only when the fighting stopped and Grant was assigned monotonous duties at remote posts far from his wife and family did he again begin neglecting his work and drinking heavily. He resigned in 1854 to avoid being drummed out of the service.

Grant spent the next six years in St. Louis, Missouri with his wife, Julia Dent Grant. After several short-lived pursuits, including a brief episode as a farmer, he moved to Galena, Illinois to be a clerk in his family's store. When the Civil War began in 1861, he jumped at the chance to volunteer for military service in the Union army. His first command was as the colonel of the 21st Illinois Infantry, but he was quickly promoted to brigadier general in July 1861, and in September was given command of the District of Southeast Missouri.

His 1862 triumphs at Fort Henry and Fort Donelson in western Tennessee won him the nickname “Unconditional Surrender” Grant, and placed him before the public eye.  However, when a surprise attack by Confederate forces at the Battle of Shiloh yielded devastating casualties during the first day's fighting, President Abraham Lincoln received several demands for Grant's removal from command. Nevertheless, Lincoln refused, stating, “I can’t spare this man. He fights.”  The following day, Grant's Army - bolstered by troops under Maj. Gen. Don Carlos Buell - fended off Confederate advances and ultimately won the day.

Grant’s hard-won victory at Vicksburg, Mississippi, in May of 1863 was a strategic masterpiece.  On May 1, 1863, Grant's army crossed the Mississippi River at the battle of Port Gibson.  With Confederate forces unclear of his intentions, Grant sent a portion of his army under Gen. William T. Sherman to capture the state capital, Jackson, while setting his sights on Vicksburg with a view toward permanently closing the Confederate supply base.  When initial assaults on the city demonstrated the strength of Vicksburg's defenses, the Union army was forced to lay siege to the city.  On July 4, 1863, after 46 days of digging trenches and lobbing hand grenades, Confederate general John Pemberton's 30,000-man army surrendered.  Coupled with the Northern victory at Gettysburg, the capture of Vicksburg marked the turning point in the war.  It also made Grant the premier commander in the Federal army.  Later that same year, Grant was called upon to break the stalemate at Chattanooga, further cementing his reputation as a capable and effective leader.

In March 1864, President Lincoln elevated Grant to the rank of lieutenant general, and named him general-in-chief of the Armies of the United States. Making his headquarters with the Army of the Potomac, Grant was determined to crush Robert E. Lee and his vaunted Army of Northern Virginia at any cost.  Though plagued by reticent subordinates, petty squabbles between generals and horrific casualties, the Federal host bludgeoned Lee from the Rapidan River to the James in what one participant would later describe as "unspoken, unspeakable history."  The battles of the Wilderness, Spotsylvania, Cold Harbor and the subsequent siege of Petersburg effectively destroyed the rebel army, leading to the fall of Richmond and Lee's surrender at Appomattox Court House.  Though Grant’s forces had been depleted by more than half during the last year of the war, it was Lee who surrendered in 1865.

After the Civil War, President Andrew Johnson named Grant Secretary of War over the newly reunited nation. In 1868, running against Johnson, Ulysses S. Grant was elected eighteenth President of the United States. Unfortunately, though apparently innocent of graft himself, Grant’s administration was riddled with corruption, and scandal.

For two years following his second term in office, Grant made a triumphal tour of the world. In 1884, he lost his entire savings to a corrupt bank. To make up some of his losses, he wrote about his war experiences for Century Magazine. They proved so popular that he was inspired to write his excellent autobiography, Personal Memoirs of U.S. Grant, finishing the two-volume set only a few days before dying of cancer at the age of sixty-three.  Ulysses S. Grant is buried in New York City in the largest mausoleum of its kind in the United States.  Reminiscent of Napoleon's tomb in Paris, Grant's tomb is a National Memorial.