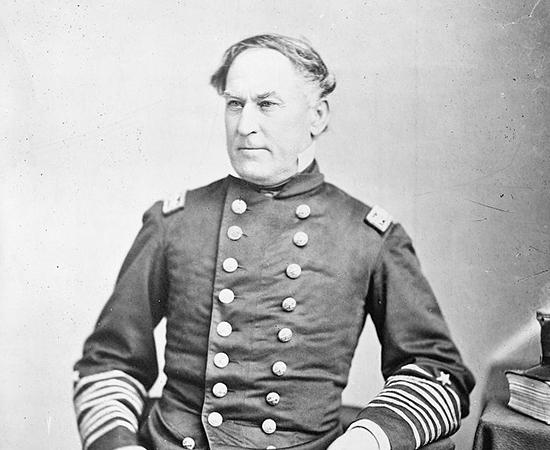 David Glasgow Farragut’s father, Jorge, was a Spanish merchant captain who had served in the American Revolution and the War of 1812.  As a young man, Farragut was sent away from his birthplace in Tennessee to live with Captain David Porter in Virginia to learn a trade. In 1812 he traded his original first name, “James,” to “David” in honor of his adoptive father.  This “adoption” made David Farragut the “foster brother” of another famous Civil War admiral, David Dixon Porter.

Farragut began his life as a sailor early; he commanded a prize ship captured in the War of 1812 when he was twelve years old. He joined the Navy in December 1810 and by the time of the Civil War; Farragut had proven his ability repeatedly.

Despite the fact that he was born and raised in the South, Farragut chose to side with the Union. In April 1862, while commander of the West Gulf Blockading Squadron, “Flag Officer” Farragut took the city and port of New Orleans.  As a reward, the Union created the new rank of Rear Admiral.

In July 1862 he passed the batteries defending Vicksburg, but was unsuccessful there and was forced to withdraw his flotilla.  In 1863 Farragut seriously bungled his role at the Siege of Port Hudson.  Initially, the Union plan was for Nathaniel Banks’ Army of the Gulf to create a diversion while Farragut’s flotilla passed by the Confederate guns.  However, instead of beginning his run on the morning of March 15, 1863, Farragut decided to begin on the evening of March 14th.  The Confederate guns forced Farragut’s flotilla to retreat with heavy damage.  General Banks had no option but to continue the siege without the help of the Navy.  Both branches of suffered a tremendous casualty rate.

The siege of Port Hudson did not end until July 9, 1863 – five days after the surrender of Vicksburg.  With the fall of Vicksburg and Port Hudson, the Confederacy lost the vital lifeline of the Mississippi River.

Farragut’s greatest fame came from the August 5, 1864 Battle of Mobile Bay.  The Confederates had placed a large number of “torpedoes” in the waters.  The monitor USS Tecumseh struck a torpedo and began to sink, causing the rest of the fleet to back away from the mine-infested waters.

At the time, Farragut was watching the battle while lashed to the rigging of his flagship (USS Hartford).  Alarmed, Farragut shouted, “What’s the trouble?”  The USS Brooklyn answered, “Torpedoes!”  Farragut shouted back, “Damn the torpedoes!  Four Bells! Captain Drayton, go ahead!  Jouett, full speed!”  In the end, Farragut’s fleet defeated Confederate Admiral Franklin Buchanan and the last open seaport on the Gulf of Mexico fell to the Union.

Farragut was promoted to Vice Admiral in December of 1864; in July of 1866, he was promoted to Admiral.  Admiral Farragut stayed on active duty for the remainder of his life and died in 1870 at the Portsmouth Naval Shipyard located in Kittery, Maine.  He was buried in Brooklyn, New York.