The woods at Cedar Mountain Battlefield in Culpeper County, Va.

What would it take to move Stonewall Jackson, who never shied from a fight, to draw his sword in action for the first time? Hand-to-hand fighting at Cedar Mountain in weather so stifling it gave new meaning to the phrase “the heat of battle.”

“[H]eat was excessive, more than flesh and blood could stand, and the troops had not marched a mile before men began to wilt and be overcome with it, and to fall out of the ranks in considerable numbers.” So described Edwin E. Marvin, regimental historian of the 5th Connecticut. “The march had to be slow,” Marvin continued, “consequently, with halts and frequently where shade was found, to let the stragglers come up. Many were really sunstruck on that march and lay by the roadside in an almost dying condition, as far as appearances could indicate, and it was a wonder that so few of them were really seriously affected.”

Thus was the experience of men from the Nutmeg State on their August 8, 1862, seven-mile march to Cedar Mountain. A soldier in the 21st North Carolina, a part of Brig. Gen. Isaac Trimble’s Brigade reported that“[t]he weather was oppressively hot, so that it was almost impossible to get along. Men would faint and drop, apparently dead, in the road. It was impossible for commanders to keep their regiments together, as the men would scatter and straggle in every direction, hunting for shade and water. We were halted 2 or 3 hours in the middle of the day, and got considerably cooked off.”

Getting to a fight was just as dangerous as the actual battle.

By July 1862, Confederate Gen. Robert E. Lee had successfully removed the threat of the Army of the Potomac from the gates of Richmond, restricting it to an enclave at Harrison’s Landing. Lee then became aware of a threat growing northwest of Richmond. Maj. Gen. John Pope was organizing his Federal Army of Virginia across the Northern Virginia Piedmont. Pope’s presence required a response, for the key railroad junction of Gordonsville was now threatened. If lost, Richmond would be without its primary logistics line, and Pope’s 40,000-man army would be squarely at Richmond’s back door.

Lee dispatched Maj. Gen. Stonewall Jackson to Louisa Courthouse with his Army of the Shenandoah on July 13. Maj. Gen. A. P. Hill’s “Light Division”marched to join Jackson a few days later, bringing his command up to 22,000 soldiers. Outnumbered nearly two to one, Jackson was tasked to protect Gordonsville and, if practicable, strike a blow against Pope.

By August 7, Jackson was able to discern that Pope was moving south and, knowing he needed to strike soon, set his army in motion to attack Crawford’s exposed brigade in Culpeper before Pope could concentrate.

Jackson, in his typical fashion, kept details of the march to himself. The order of march would be the divisions of Maj. Gen. Richard Ewell, camped west of town, then Hill’s division followed by Brig. Gen. Charles Winder’s division, both camped south of Orange Court House. After dispatching the orders, Jackson recognized that Ewell could march by a more direct route, bypassing the town, and so he ordered him to do so. Stonewall neglected to inform Hill, however. Before dawn, the Light Division was lined up, prepared to follow Ewell, when its commander realized that Winder’s men, not Ewell’s, were marching past.

At this point, Jackson rode up and found Hill’s men standing along the roadside. As related by James I. Robertson, biographer of both men, in his Stonewall Jackson: The Man, The Soldier, the Legend, “Spying Hill and giving him a dark look, Jackson demanded to know why Hill’s brigades were not moving. Hill snapped back as few words as his own seething anger would allow. Jackson galloped away in obvious fury. Jackson would never forgive the commander of the Light Division.”

August 8 was, without a doubt, the worst day of marching in Jackson’s storied history. That night, as recorded in the Official Records, he wrote to Lee, “I am not making much progress. The enemy’s cavalry yesterday and last night also threatened my train ... Hill, ... making only 2 miles yesterday. Ewell’s division, which is near this point (12 miles from Culpeper Court-House) and in front, marched about 8 miles. Yesterday was oppressively hot; several men had sun-stroke.... I fear that the expedition will, in consequence of my tardy movements, be productive but of little good.”

With Bayard’s cavalry contesting the advance and a signal station on Throughfare Mountain, Jackson’s advance was tracked from the start. Pope ordered Banks’s II Corps forward to contest the advance. The armies would meet below Cedar Mountain. Banks’s 16-mile march to the battlefield began in the early hours of that fateful Saturday.

August 9 dawned warm, and it was clear the day would grow to be just as hot as the previous few. Jackson was six miles short of Cedar Mountain, Banks’s 8,000-man command was along the Hazel River, north of Culpeper Court House. Between them, at Cedar Mountain, was Crawford’s four-regiment brigade, two batteries of artillery and Bayard’s cavalry screening Jackson. These men suffered throughout the morning and afternoon waiting in the heat.

Frederic Denison, chaplain and historian for the 1st Rhode Island Cavalry of Bayard’s brigade, made note of the heat in his memoir. “Unable to leave our position, our men suffered for the lack of water and regular rations. I recollect having filled my canteen with water, from the run and from wells, fifteen times during the day, taking in all twenty-one quarts, a part of which I gave to field and staff officers and to particular sufferers.” 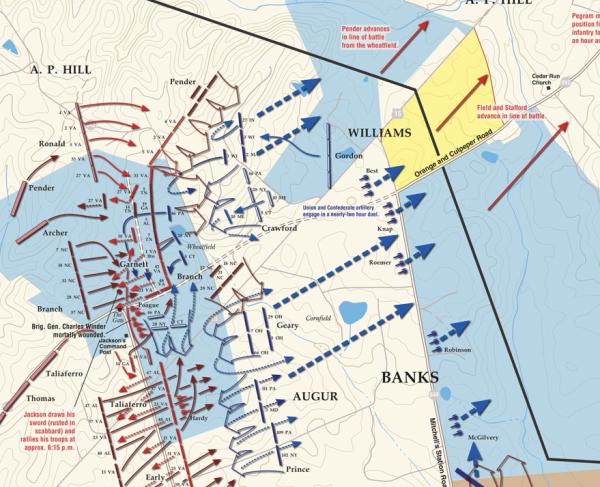 By 1:00 p.m., Ewell’s lead brigade, under Brig. Gen. Jubal Early, advanced into the fields to confront Bayard’s men. Along the slope of Cedar Mountain, Ewell sent Trimble’s brigade and artillery under 19-year-old Capt. Joseph Latimer to control the heights and dominate the field. Protected by infantry, Latimer’s gunners would hold an artillerist’s dream position, dominating nearly every part of the field.

Early cleared out the Yankee horse soldiers then came under fire from Federal artillery on the eastern end of the field. As Early cleared the cavalry, the remainder of Banks’s corps arrived and moved into position.

Jackson’s force utilized a single road, which came under increasingly heavy artillery fire. Winder’s division was forced off the road into the trees by this fire as its men moved into position. Winder, while placing his men, was also working with artillery positioned near the Crittenden Gate. While assisting the gunners, Winder was mortally wounded by a shell, becoming the highest-ranking Confederate to die in Culpeper County during the war. The intense Federal artillery fire forced the Confederates to abandon the road and move through the woods.

Banks’s two divisions, under Brig. Gens. Christopher Augur and Alpheus Williams, formed on a ridge above Cedar Run. Pope’s intention was to fight a defensive battle, but verbal orders between Pope and Banks’s aides were miscommunicated, and Banks, observing Jackson advancing along the single road, found in his mind the opportunity to avenge the losses in the valley. At 5:00 p.m., with temperatures in the 90s, he ordered his men forward.

The attack was uncoordinated. Beginning on the Union left, Augur’s brigades of Brig. Gens. Henry Prince and John Geary stepped off into corn at different times. To their front, two brigades of infantry opened on Auger’s brigades, who also came under fire from Lattimer’s guns on Cedar Mountain, while Geary also took flank fire from Brig. Gen. Richard Garnett’s Virginians posted along the fence-lined road bordering the corn.

Between 15 and 30 minutes after Augur’s advance, Williams’s division stepped off, with three of Crawford’s regiments surging from a tree-covered hill into a recently shocked wheat field. One regiment was held by Banks as his reserve. Crawford’s 5th Connecticut advanced toward a fence manned by Garnett’s men, while the 28th New York Infantry and 46th Pennsylvania advanced beyond the Confederate left flank and into woods behind the Rebel lines. Striking the Rebels in the flank and rear, the fighting became brutal and personal. The bayonet was freely used. The advancing Yankees forced portions of Garnett’s men into the open to retreat toward the Crittenden Lane. Garnett’s exposed brigade suffered 301 casualties.

At this point Jackson, who was on the right of the line, was heard to say, “There is some hard work being done over there.”

Jackson raced toward his collapsing left, leaping fences and losing his hat. As he neared the Crittenden Gate, ever the artillerist, he ordered the guns still in the battery to the rear.

Lt. Charles Blackford, Stonewall’s aide-de-camp, who was near the Crittenden Gate, marshalling Hill’s arriving division, witnessed Jackson’s arrival at the critical juncture of the battle. Blackford recalled, “Jackson, with one or two of his staff, came dashing across the road from our right in great haste and excitement. As he got amongst the disordered troops he drew his sword [it was rusted in its scabbard, so Jackson unclipped it and raised both sword and scabbard], then reached over and took his battleflag …and dropping the reins, waved it over his head and at the same time cried out in a loud voice, ‘Rally, men! Remember Winder! Where’s my Stonewall Brigade? Forward, men, Forward!’”

Others present recalled different phasing, but all agree the effect was electric. The tide of battle was turned.

The arrival of A. P. Hill’s division couldn’t have been better timed. Brig. Gen. Edward L. Thomas’s Georgians were dispatched to anchor Jackson’s right. The next brigade up was Brig. Gen. Lawrence O’Bryan Branch’s North Carolinians. They had formed and were ready to advance when Jackson rallied the broken men. Branch moved through the stifling woods and swept up the exhausted Federals, whose formation was broken from the close fighting and heat.

Nearly 30 minutes after the initial advance, Banks’slast brigade, Brig. Gen. George H. Gordon’s, came forward at Crawford’s right. Advancing through a valley, the men were exposed to flank fire from the Stonewall Brigade, positioned on the ridgeline. Then, in front of Gordon, stepped up Branch’s North Carolinians. In their brief fight, the brigade lost 466 men; in retreat, they were nearly flanked by two more fresh brigades.

Seeing the withdrawal of Crawford’s men, Geary’s and then Prince’s soldiers withdrew. Neither commander was with his troops, Geary having been twice wounded and Prince captured. Augur was also wounded, and division command had devolved to Brig. Gen. George Greene, whose two-regiment brigade defended the Federal left.

Banks, seeing the collapse of his entire line and the surging Confederates, sent his only reserve into the fray, Crawford’s 10th Maine Infantry. As the sun set in their faces, the Maine men fought portions of seven Confederate brigades. By the end of the night, 51 percent of Crawford’s brigade were casualties.

A late charge by a battalion of the 1st Pennsylvania Cavalry, costing nearly 100 men, bought critical time for Banks’s withdrawal.

The fight had lasted nine hours, with the most intense infantry clash lasting 90 minutes, nearly matching the temperature. Cedar Mountain cost the Federals 2,381 casualties, 20 percent of those engaged, including Banks, injured late in the fight. Jackson’s command suffered 1,276 casualties.

Jackson, in his last action as an independent commander, accomplished Lee’s directives. Stonewall kept Gordonsville free of Yankees and found the opportunity to successfully strike a blow. Richmond was safe, and Lee gained his launching point for the Second Manassas Campaign.

Michael A. Block
A 20-year veteran of the U.S. Air Force, Michael A. Block has been on the board of directors of the Friends of Cedar Mountain Battlefield since 2012 and is currently serving as its vice-president. He has also served on the Board of the Brandy Station Foundation and on both the Culpeper and Fauquier Sesquicentennial Committees.
Related Articles 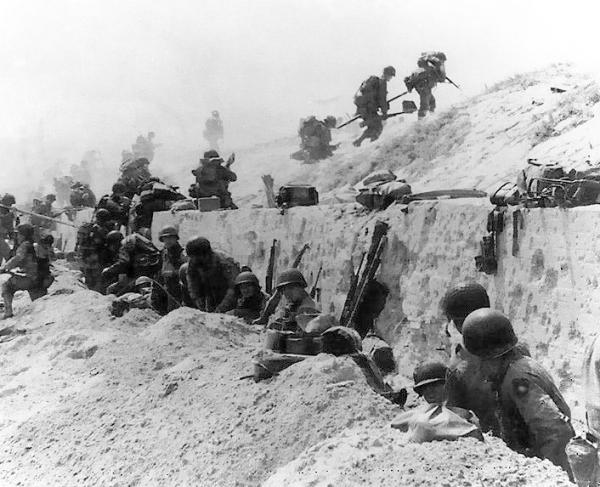 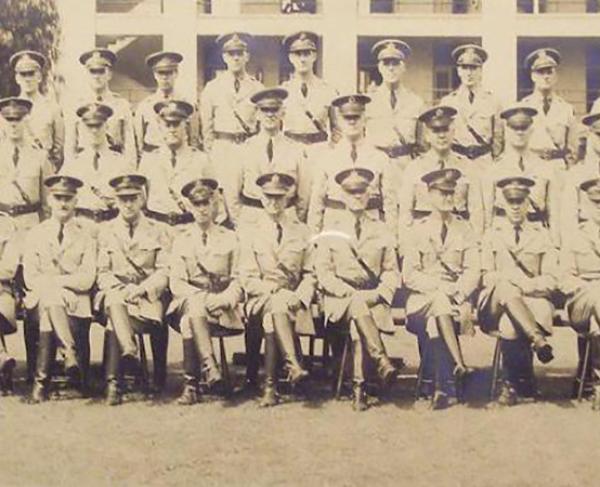