The Pivotal Moment of the Maryland Campaign: The Case for Shepherdstown

In our Fall 2012 issue of Hallowed Ground, four historians made a case for why their respective battle was the pivotal moment of the 1862 Maryland Campaign. Nicholas Redding, the executive director of Historic Long Branch in Clarke County, Va., made the case for Shepherdstown.

In the wake of the Battle of Antietam, after 17 months of harrowing Civil War, it seemed as if a crowning Union victory was finally within grasp. The Army of the Potomac had held firm and fought its able foe to a tactical draw on the banks of Antietam Creek. Now was the time for the knock-out punch.

For Confederate high command, Antietam had been a crippling blow — but they were far from cowed. This was the same army that had, in the last three months, repulsed Maj. Gen. George McClellan as he stood before the gates of Richmond and had won a second decisive victory on the killing grounds at Manassas. These troops would regroup and attack once more.

Despite what the traditional storyline suggests, Antietam was not the definitive, pivotal moment of the Maryland Campaign. Rather, that moment came as both armies met along the placid banks of the Potomac River just above Shepherdstown, West Virginia. If fate had reversed the outcome of the former engagement, the Civil War would still have continued, albeit unfolding in a different manner, possibly with European support for the Confederacy.  The same cannot be said for the latter fight; McClellan had crippled his enemy, leaving him isolated from his supply lines in unfamiliar territory, but did not press to strike the decisive, crushing blow.

By the second morning after the Battle of Antietam, September 19, 1862, the bulk of Lee’s army had safely re-crossed the Potomac at Boteler’s Ford (also known as Blackford, Packhorse or Shepherdstown Ford) without an ounce of Federal interference. It was only then that McClellan dispatched Brig. Gen. Alfred Pleasonton and his cavalry to harass the Confederate rear-guard. Union horse artillery quickly unlimbered on a nearby hill and began a ferocious assault. The Maryland Campaign was not over; the fight had been renewed.

Later that day, Union Maj. Gen. Fitz John Porter and his V Corps arrived to relieve Pleasonton and began a legitimate pursuit. That evening, nearly 2,000 soldiers of the V Corps advanced across the river to probe the Southern lines. Commanding the Confederates was the minister-artillerist, Brig. Gen. William Nelson Pendleton, who had 44 pieces of  artillery and approximately 600 infantry troops at his disposal. Panicked by Porter’s advance, Pendleton disgraced himself by riding away from the combat, desperately searching out headquarters. Once he extricated himself from the tangled mess of an army on the move, Pendleton announced that he feared all of the Army of Northern Virginia’s reserve artillery may have been captured.

Pendleton was incorrect — only four guns had been taken — but his inability to handle the rapidly developing situation proved to be a blessing in disguise for the Confederates. Command was turned over to the inestimable Maj. Gen. Thomas J. “Stonewall” Jackson, who dispatched Maj. Gen. A.P. Hill to the ford.

At dawn on September 20, Porter renewed his attack, fording the knee-deep Potomac and deploying fresh troops above the rocky bluffs that fronted the alluvial plain. Although they were supported by powerful artillery batteries posted on the Maryland shore, many of the Union troops were green volunteers, some only in service for a few weeks. They were confronted by Hill’s battle-hardened veterans, who struck without remorse.

By 2:00 p.m., the haphazard Federal attack, and an equally disastrous retreat, was complete, leaving behind 625 Union and Confederate casualties, enough to make the Battle of Shepherdstown the bloodiest engagement ever fought within the borders of modern West Virginia.

The bloodshed unquestionably pales in comparison to Antietam. Yet, pivotal moments in military campaigns are measured not by casualty figures alone.

The Battle of Shepherdstown equally tempered both army commanders’ zeal for renewing the fighting, something Harpers Ferry, South Mountain and even Antietam, with its 23,000 casualties, had failed to do. After Antietam but prior to Shepherdstown, Lee was still on an offensive footing. On September 18, Lee sent Maj. Gen. J.E.B. Stuart’s cavalry on an offensive maneuver and still seriously considered a new advance north to be a viable option — but by September 25, he was “led to pause” when considering such an action. Shepherdstown showed Lee that his army was no longer fit for a fight.

Prior to Shepherdstown, even the cautious McClellan wrote that he believed the fighting would be renewed, and requested more ammunition to sustain his army in the coming days. But the fighting at Shepherdstown made McClellan hesitate, encouraging his decision to suspend the campaign, to declare victory on the grounds that he had driven Lee from Maryland and to live to fight another day.

As the country waited for news of the next move, Gideon Welles, then Secretary of the Navy, spoke for the nation when he wrote in his diary, The country groans but nothing is done . . . Certainly the confidence of the people must give way under this fatuous inaction.

It was that fatuous inaction, following the termination of the campaign after Shepherdstown that would ultimately lead to Little Mac’s sacking — itself one of the most pivotal moments of the war. It was not his performance at Antietam that forced President Lincoln to remove McClellan; rather, it was his non-performance following Shepherdstown. Exhausted and bloodied, the Confederates went limping back toward Virginia. But in the wake of Porter’s bungled attack, McClellan offered no pursuit, forsaking the opportunity to strike a crippling blow and end the war.

In the end, Shepherdstown proved to Union and Confederate soldiers alike that after weeks of hard marching, pitched battles and dogged pursuit, both armies were played out. Shepherdstown, the bloody post-script to Antietam, ended both the career of George B. McClellan and Confederate hopes of an elusive victory on Northern soil — and in doing so remains the most pivotal moment of the Maryland Campaign of 1862.

Nicholas Redding, executive director of Historic Long Branch in Clarke County, Va., is the Civil War Trust’s former deputy director for advocacy. He is the author of A History and Guide to Civil War Shepherdstown: Victory and Defeat in West Virginia’s Oldest Town. 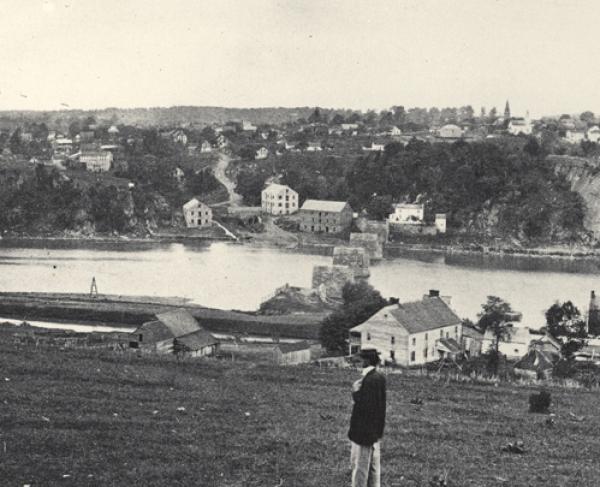 Book: A History and Guide to Civil War Shepherdstown