Book: A History and Guide to Civil War Shepherdstown

An Interview with Nicholas Redding

The Civil War Trust recently had the chance to sit down with Nicholas Redding, author of a new book, Civil War Shepherdstown: Victory and Defeat in West Virginia’s Oldest Town.  This new book describes and analyzes the story of a town caught on the border of north and south and the experience of its citizens. The book also offers driving tours of nearby sites, including the Shepherdstown Battlefield.

Civil War Trust: Most Maryland Campaign centric books focus exclusively on military aspects of the war – what attracted you to write something that focused on the civilian experience?

Nicholas Redding: With the exception of a few notable books, very little research and scholarship has been devoted to the story of the civilians who endured many of the most significant Civil War campaigns—including the Maryland Campaign. What has been written has largely focused on Sharpsburg and the surrounding towns in Maryland—their neighbors in Virginia are rarely given more than a footnote. I wanted to change that.

This is an important story. It’s a story of a people tested by horrendous circumstances. The citizens of this town didn’t seek out the challenges that they faced – but they rose to meet them nonetheless. That’s a story worth documenting, and fortunately the tremendously detailed letters which survive aided in that effort.

Set the stage for us. Where is this town located, and why was the experience of the war so dramatic in this small village?

NR: Shepherdstown sits above the Potomac River, directly across from Maryland, approximately a dozen miles northwest of Harpers Ferry. The town is positioned just a mile or so from a well-traveled ford (known as Boteler’s, Packhorse, or Shepherdstown Ford) which was attractive to 18th century travelers heading south up the great Valley of Virginia, and gave rise to the town itself.

In 1860, the town was part of the Commonwealth of Virginia, but by 1863 that would all change with the admission of West Virginia as the 35th state in the Union.

And, by unfortunate circumstance, the town is also located around 4 miles south of Sharpsburg, Maryland. That positioning meant it was overwhelmed by Confederate casualties following the harrowing bloodshed at Antietam on September 17, 1862.

All of these geographic realities meant that the town sat on the border of north and south, in a politically turbulent region which found itself near a devastating fight. It was a recipe for chaos. Whereas many towns could point to one day as the "day of days" during the war, Shepherdstown may have had a hard time choosing. It was, as one resident wrote, "Like an awful dream."

Considering this was Virginia, was this town a staunchly pro-Confederate community?

NR:  In short, no. Despite what local myth has suggested, the documentary record shows that there was a wide range of loyalties – and a surprisingly large number of loyal Unionists throughout the war.

Caroline Bedinger, a transplanted northerner living in Shepherdstown, shared explicit doubts on the logic of secession in a letter sent to her mother in early April 1861, lamenting, “. . . infatuation seems to posses the People North and South Eager for a War that can only ruin them.” Her doubts were joined by others over the next four years, and a wartime diary recorded that upon hearing of the news of Appomattox, “Union people” rejoiced.

But, it appears the vast majority of residents did support the Confederacy, evidenced by the fact that a large number of young men went off to fight in Co. B, 2nd Virginia Infantry, of the famed Stonewall Brigade, and the 1st and 12th Virginia Cavalry, to name but a few.

Who jumps out as one of the most unique characters from the research you’ve done on this town?

NR:  Dr. Charles Wesley Andrews, another transplanted northerner probably fits the bill. He left his native state of Vermont to attend Episcopalian Seminary in Virginia, met his wife in the Old Dominion and put down roots.

He married into a prominent slave-holding family from nearby Clarke County, Virginia and would later manumit his slaves to a new life in Liberia. Letters written to these slaves and their letters back suggest he taught his slaves to write – itself a serious crime. Extant records at Trinity Episcopal show he recorded slave marriages, an almost unheard of act of religious heresy that gave credence and legitimacy to slave marriages. When the local free-black parish needed a minister, he would worship with them on Sunday evenings. In response, they named their parish St. Andrews.

When the war came, and his son announced his intention to enlist, Dr. Andrews explained in no uncertain terms his hatred for secession:

The patience which I once had (for it was never more) [for secession] is all gone, and the people who were temporarily carried away with it by ye’ violent measures of the Fed’l Govt are fast awakening to ye’ fact [that] if secession prevails their liberties are gone from ye’ start.

Yet, for all he obviously cared for the Union and for the plight of his enslaved brethren, when the war came, he tended to his flock, north and south without prejudice. In the wake of Antietam, his own parlor was filled with dead and dying soldiers and his children tended to their wounds; he to their souls.

And when he died, he was mourned by black and white equally. He was a study in contrasts and emblematic of a good man stuck in an awful moment. His story is one to which we can all relate, and which we should all remember.

What happened at the Battle of Shepherdstown – why couldn’t the Union finish the job?

NR:  One truism of war is that a river is a terribly difficult obstacle to overcome, regardless of your strength. Napoleon knew it. Washington knew it. Lee knew it.

Fitz John Porter learned it the hard way at Shepherdstown.

Following Antietam, with most of the Confederate Army safely across the Potomac, Gen. McClellan slowly began his pursuit. On September 19, he first sent Gen. Alfred Pleasonton’s cavalry, and later Fitz John Porter’s Fifth Corps to harass their retreat.

Arriving that afternoon, Porter found a small rebel force across the river, in the incapable hands of Confederate General William Nelson Pendleton. Union troops sent across the river shook Pendleton’s resolve and sent him running for support and nightfall stopped the entire affair.

In the morning, Porter’s advancing Union columns ran into A.P. Hill’s battle hardened veterans and not Pendleton’s scratch force of the previous night. From there it was sheer terror for the Fifth Corps.

Bad intelligence, bad communication and advantageous terrain for the Confederates converged in a confluence of disaster for Porter. Unable to sustain the assault, the Union troops were driven pell-mell into the river, in the bloody post-script to Antietam.

In his official after-action report, A.P. Hill explained, “The broad surface of the Potomac was blue with the floating bodies of our foe. But few escaped to tell the tale.”

How has preservation played a role in your research? Is there much left to preserve at Shepherdstown?

NR:  Preservation was of paramount importance to this study. Preservation of the built environment – homes, offices, storefronts in Shepherdstown presented me with an almost untouched collection of buildings that most Civil War Shepherdstown residents would remember. To be able to visit the homes where Civil War era letters were written provided me an opportunity to see what they saw, and experience their humanity in a profound way.

On the Shepherdstown Battlefield, the recent success of the Civil War Trust in preserving the Cement Mill and adjoining lands has ensured future generations will forever understand the terrible slaughter of that day – and remember the sacrifices of that courageous generation. It gives visitors a place to ponder and reflect, and in such a fast-paced, forgetful world, that’s an awfully important thing.

In short: Without a preserved landscape or preserved town, this book would have been impossible to write and meaningless to read.

Buy the Book: "A History and Guide to Civil War Shepherdstown" is available from our Civil War Trust-Amazon Bookstore

Nicholas Redding, executive director of Historic Long Branch in Clarke County, Virginia, is the Civil War Trust’s former deputy director for advocacy. He is the author of, A History and Guide to Civil War Shepherdstown: Victory and Defeat in West Virginia’s Oldest Town. 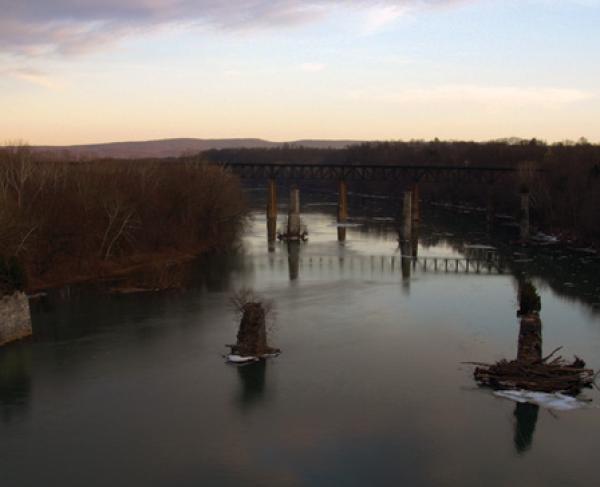 The Pivotal Moment of the Maryland Campaign: The Case for Shepherdstown