Shortly after he learned about the explosion at the Crater, General Robert E. Lee called for fresh troops to regain the lost ground. The only available reinforcements belonged to General William Mahone's division, posted two-and-a-half miles west of the Crater. Mahone selected two of his five brigades—a Georgia unit and his own Virginia Brigade, which included many men from Petersburg—to make the march. Utilizing stream beds, back roads, and covered ways to avoid detection, Mahone reached this shallow ravine at about 8:30 a.m.

The Virginians were the first to charge, their zeal for combat sharpened by the presence of United States Colored Troops. The black soldiers, among the last of Gen. Ambrose Burnside's men to occupy the Crater, had shouted "No Quarter!" during their attack, and Mahone's men prepared to fight on that basis.

Charging across the open ground in a compact formation with bayonets fixed, the Virginians reached the edge of the Crater, where they unleashed a deadly volley. The combat became hand-to-hand and men died in heaps, human gore running in streams to the bottom of the horrid pit. The black troops suffered disproportionately as they became special targets for the Confederates. Many were killed after they had surrendered. The Virginians managed to recapture most of the line north of the Crater. The Georgia brigade attacked next, but they made scant progress against the remaining Union defenders.

By then, Mahone had summoned to the battlefield a third brigade of Alabama troops under General John C.C. Sanders. At 1:30 p.m. some 630 Confederates dashed across the field to finish the job the Virginians had started. Many of the remaining Federals now retreated, but others fought, died, or were captured. When the firing stopped, some 3,800 Federals were casualties. The Confederates lost fewer than 1,200 men, including those killed by the explosion. 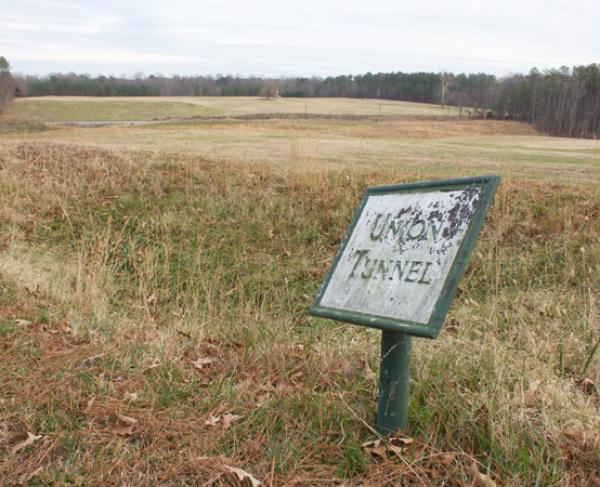 The Crater
Petersburg - Battle of the Crater - July 30, 1864
The Crater Battlefield
Chaos Beyond the Crater