The Tide Turns
By Sam Smith

Sigel was mistaken.  He was not prepared to meet a reinvigorated Confederate force.  At the same time, Lyon's element was meeting ferocious resistance on the southern slope of Oak Hill.

Captain Chisolm was leading a group of untested men in the 3rd Texas cavalry.  They waited nervously in the thick undergrowth near Wilson's Creek, ducking each time a cannonball plowed through the trees nearby.  Chisolm was chiding them for their anxiety when a huge shell passed right over his head.  He ducked.  When he sat up in his saddle he added an important point: "Except when the big ones come.

McCulloch had gone out himself to meet Sigel's advancing color guard.  He hailed them, asking "Whose forces are those?"  Hearing "Sigel's," McCulloch requested clarification.  Corporal Todt in the color guard realized what was happening and took aim at the Confederate general.  Before he could fire he was shot dead by Corporal Henry Gentles of McCulloch's staff.  Gentles received a calm compliment from his famously unflappable commanding officer before McCulloch turned to Captain John Vigilini and told him to "take your company up and give them hell."

Captain Vigilini dutifully led his company towards the crest of a slight rise in the cornfield.  He halted them on the northern face and went forward to scout with Sergeant Tunnard.  Reaching the top of the hill, he found himself within 15 feet of two of Sigel's cannons, both pointed directly at him.  Again he asked for identification, perhaps to buy time.  Sergeant Tunnard was slow to figure out the ruse but quick to point out the cannoneers' Germanic features, blowing their cover.  The two Confederates hurled themselves back over the hillside and went tumbling out of sight a split second before two balls ripped through the space they had very recently occupied.  Vigilini's company, the Pelican Rifles, sprinted up the slope after their commander and, after unleashing a close-range volley, took the guns at bayonet point.

4. "The troops were throwing themselves into the bushes...retreating as well as they could, followed and attacked incessantly by large bodies of Arkansas and Texas cavalry.  In this retreat we lost five cannon...and the color of the Third Regiment."

There was no way to gloss over the disaster in Sigel's official report.  Expecting to see friendly faces, McCulloch's attack sent panic rippling through the inexperienced troops at Sharp's farm.  They scattered westward, pell-mell, and never returned to the battle.

5. "Vast sheets of the deadly musket and mini-balls came pouring through our ranks, throwing the dust and and gravel in our faces, crippling our comrades, and killing our friends.  The fearful and terrific storm of death was raging around....Here amid this horrible scene we still maintained the deadly and unequal contest, murdering and being murdered."

Union soldiers were pushing their way through the yellow, waist-high prairie grass towards Peter Lane and his fellows, pouring close-range fire down the slopes of Oak Hill--which had by now earned the name "Bloody" Hill--into the Confederates at its base.  Through the roiling, choking blue smoke it was nearly impossible for soldiers on either side to see anything but the stabbing flames of enemy muskets.  But if Lane and his friends could hold their position then the advance would be stopped and the day would be won.

6. "I now received a shot myself, and returning towards the right of the regiment and meeting Captain Yates, informed him I had been hit, and he must, in case he missed me...keep the men together.  Feeling faint, I returned again to our left and obtained a stimulant, and soon after my horse being killed and falling upon me prevented my again being able to reach the right of the regiment."

Union Lieutenant Colonel George Andrews led the 1st Missouri into the valley as the assault reached its climactic moment.  He met a reformed, stubborn enemy in thick brush at the base of the heights.  Confederate cannons blasted hot shrapnel and canister into the stumbling, yelling Union men who were now less than fifty yards away.  The stimulant that Andrews obtained is ambiguous, but, historically, brandy is the most likely candidate.

7. "With a yell, we went toward that line of blue, like the wind....On we went--pouring lead into the blue line that was standing there 50 yards in front of us with fixed bayonets....The next moment that blue line was a mass of running, stampeding soldiers trying to get out of the way of that mass of horses and men that were bearing down on them."

Albert Blocker rode with Colonel Elkanah Greer's Kansas-Texas cavalry as they launched a flank attack up the western slope of Bloody Hill.  The cavalrymen were understrength, many of them still hiding in the trees after Sigel's bombardment had scattered them earlier in the day, and the charge was poorly organized.

8. "We saw a crowd of cavalry coming at a grand gallop, very disorderly....We advanced toward them about 40 yards...and rallied in round squads of 15 or 20 men as we had been drilled to do, to repel a cavalry charge.  We kept firing and awaited their approach with fixed bayonets.  In the mean time, over our heads our artillery took up the fight [and] the cavalry scattered through the woods, leaving the wounded horses and men strewn around."

Eugene Ware double-timed to the right flank to meet Greer's charge and he arrived in time to describe the scene from the Union line.  Had they been successful, the Confederate cavalry would have been in the Union rear and very well could have turned the day into a disaster for Lyon's army.  Instead, the Union gunners continued their deadly effective work and soon blasted the undisciplined horsemen back into the trees.  The increased range and power of Civil War weaponry rendered cavalry charges obsolete, but that was something that cavalry at this very early stage of the war had not yet discovered.

In the hot confusion of the center of the line a group of Union soldiers had been separated from their commanding officer.  General Lyon heard their cries and rode to meet them.  Blood filling his boot and dripping into his beard from two wounds received earlier in the day, Lyon swung his hat around his head and called out: "We will make one more charge....Come on, my brave boys, I will lead you.  Forward!"  He took his place at the front of his men and with a great cheer they ran down the hillside towards a dense thicket crackling with gunfire.  As they drew nearer a Confederate volley decimated the charging troops and a musket ball passed through Lyon's chest.  He fell from his saddle into the arms of Private Albert Lehman and gasped  "I am killed!"  Lehman wept bitterly, clutching his general's body amidst the violence in the prairie grass.  Nathaniel Lyon was the first Union general to be killed in the war. 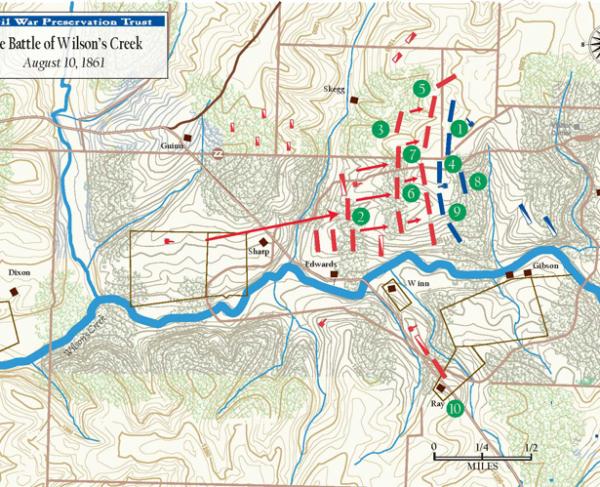