Sipping his coffee on the front porch of the Klingle Farm House at Gettysburg National Military Park (NMP), Louie Palu is relaxed. Nearing the end of his month-long stay as part of the park’s Artist in Residence Program, he has had plenty of time to reflect on this battlefield, its beauty and its meaning. He has given a great deal of thought to both the vast differences it bears from and the undeniable similarities it holds to the battlefields where he has stood under very different conditions.

The Artist in Residence Program is a National Park Service-wide initiative to place talented artists in a variety of disciples — from photographers and painters to writers and poets — at some of this nation’s most important sites. Scores of NPS units participate, with each park creating its own criteria and handling its own selection process. Gettysburg NMP hosts month-long residencies throughout the spring, summer and fall in conjunction with the Gettysburg Foundation and the National Parks Arts Foundation.

During his stay in Gettysburg, Palu participated in a number of public programs, talking about both his work and how it relates to the historical images of Gettysburg, which was the most-extensively documented battlefield of the Civil War, which itself marked a turning point in the photography of combat. He also captured new art of the scenic battlefield and its numerous monuments, with the rescue animals used on horseback riding tours particularly catching his eye — knowing that a battlefield that had witnessed unprecedented and often forgotten equine carnage was being used to give abused creatures a second chance spoke profoundly of healing.

Born in Canada to Italian immigrants who worked blue-collar jobs — a seamstress and stonemason — Palu is straightforward in his approach to the documentary photography he has pursued for almost three decades. “I believe that what I do is not a career, but a way of life and belief system,” he summarizes. “My role in the world as a photographer is to monitor power and document social-political issues relating to human rights, poverty and conflict. I try to use the most simple of photographic approaches and equipment free of effects and gimmicks. I believe in ethically produced, straightforward, raw, unflinching images.”

The killing grounds that photojournalist Palu has shared with soldiers have been primarily in Afghanistan, but he was able to connect that remote location to Gettysburg quite powerfully by erecting an outdoor exhibition of his work near the park visitor center.  Large-scale portraits of U.S. Marines stand watch in the dappled sunshine and peak out from behind trees. The faces are haunting to even a casual visitor who doesn’t know, as Palu does, their names and hometowns or what has become of them since the pictures were snapped.

He covered the War in Afghanistan between 2006 and 2010 as a staff photographer for The Globe and Mail, Canada’s most widely read newspaper, and on behalf of the photo agency ZUMA Press. That experience only served to solidify his adherence to the code of ethics put forth by the National Press Photographer Association, which offers guidance on how to accurately report the news for current audiences and for posterity, while still treating every subject with dignity and respect.

“My personal ethics and my professional, they’re one in the same.” Palu says, acknowledging that great care goes into the photos that are shown and not shown. “Like showing a pile of heads left on the side of the road in Mexico during the drug war. Am I teaching? Or am I going to just shock people, and they’re going to turn away, turn it off? Or is there some other way I can show it to teach people something?”

In a way, journalists like Palu go to warzones so the rest of us don’t have to, but can still understand something of the reality of war.

“I made a film, Kandahar Journals, based on my personal journals in Afghanistan, because I wanted to show this inability of photography to convey the reality of war,” he says. “Photography could be a tool of remembrance or a tool of understanding, a window into a world you can’t go into or things you can’t see. But in the end, what’s missing is the visceral experience. Seeing the fragility of the human body, of torn up bodies, there is a survival instinct that kicks in. It’s very emotional and psychological, and that’s something that I hope people never have to really experience. But that’s why I think it’s important to still have photographs of that. So that that's about as far as you need to ever understand.”

Palu is himself something of a student of photography’s origins, but he has never before undertaken the experience of lining up a historical view while standing on the battlefield. But he jumps at the chance to don 3D glasses with the Trust’s chief historian, Garry Adelman, who specializes in photo history, so they can match up specific shots.

“I think that understanding your history of your medium, of what you do — whether you’re a singer, songwriter or a poet — and what you’re talking about is key to creating really strong and powerful work.”

Taking in the images captured at the Rose Farm, he reflects that “In a lot of ways, there just is no precedent for Alexander Gardner. Just getting there, you have a freaking wagon — I could probably walk faster!” But more than the cumbersome process required by cameras of the period, “Seeing a dead person is a very shocking thing. I think that coming into a battlefield you feel an instinct that kicks in, and, and there's an empathy in that. But I can't imagine the sea of bodies he faced, the smell — even from the horses. It must've been almost like discovering Niagara Falls, but in an express elevator to hell.”

What if Palu had been in Gardner’s shoes here at Gettysburg?

“If I came up to a battlefield like this, and men were left behind and there may be weapons and stuff lying around, I probably will not walk onto it. Today, that would probably mean there was a minefield, or booby traps or improvised explosive devices set up. Because, number one, most armies don’t leave their dead behind ... and weapons just don’t get left behind — they're valuable. So,I would be cautious immediately.”

But that wouldn’t be his only worry. “Snipers. Depending on the politics of where I'm covering, they may want to kill journalists. … When I went to Ukraine, I had my ballistic vest that says ‘Press’ and still, kind of like Alexander Gardner, I got held at checkpoints by either the separatists or the Ukrainian army until they verified who I was. But in Afghanistan, they don’t care. If you had somebody who said ‘Press,’ they could see it from far away. So they’d probably aim the rocket-propelled grenade at you first, because from a distance you'd be the first thing they could aim at.”

Despite their undeniable power, Palu believes that the photos besides those of the battlefield dead at Gettysburg or Antietam were equally important to dispelling the romanticized view of war that had largely existed before the advent of photography.

“He could do aftermath photographs, including hospitals and even medical surgery. All these things expand our visual understanding of what war is and all the different layers that it is. That war is not just that moment where two armies fight and shoot at each other. That people die, people end up as prisoners. People who look just like us. And it causes people to ask questions. And I think that that’s the really important thing about what Alexander Gardner did here.”

For all that he respects the work done by his predecessors in the field, Palu is firm in his belief that the practices of combat photographers have improved considerably — his commitment to journalistic ethics is a far cry from Gardner repositioning the sniper’s body in Devil’s Den for a more compelling shot. But even today, those ethics are evolving; considerations have arisen within Palu’s own career with the dawn of photo editing software and the internet.

“I think the important thing too is we've got to consider social media. Back then, Alexander Gardner would have been in a sea of anonymous people,” he says. “I think now I need to be very, very careful because people will be like, ‘Hey, that's my son. That’s my dead son you just put all over the internet.’ Or ‘That's my dead daughter.’ Or ‘That’s me grieving over my dead family member.’”

Despite years that have divided them, Palu muses that there is a true community among combat photographers, because they are a rare breed. “Even when I’m with a military unit, I’m not a combatant. I don’t carry a weapon, and I’m there to document what’s going on as an independent witness. I’m not on anyone’s side. I’m on the side of human rights and sort of all the things that we cherish that is a part of it, any kind of democracy.” 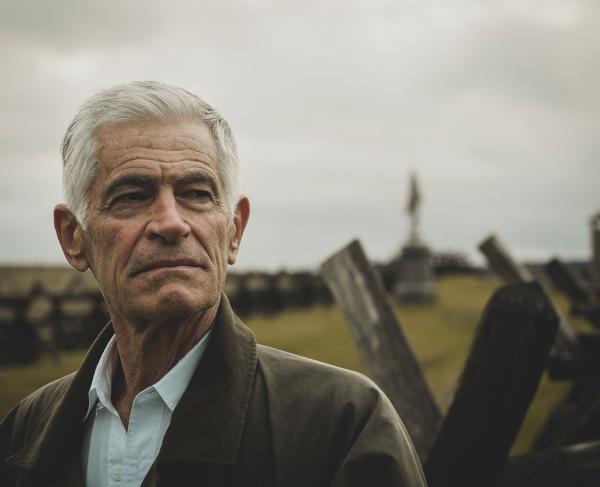