In my youth, I was greatly influenced by the photographs from the Vietnam War and the American civil rights movement. I had no background in photography, had never used a camera. But after I graduated from college, I decided that’s what I wanted to do with my life, because I saw that that work had such great value to society. Military leaders and political leaders were telling the population one thing, and photographers were showing us something very different, and I found the photographers to be much more convincing.

I became a photographer in order to be specifically a war photographer. That’s what I wanted to do, and I realized I had to train myself to the extent that I felt that I was capable of making a worthwhile contribution as a war photographer, because I recognized what a serious responsibility it was.

I borrowed a camera from my brother because I didn’t have enough money to buy one. I supported myself by driving trucks at night, working in a warehouse at night. I read books on how to use a camera, how to expose a negative. I rented a darkroom space and taught myself how to develop film, how to make prints. I would give myself assignments as if I was working for an editor and go out and shoot. In the end, it took me 10 years to train myself before I felt ready to actually document a war.

After some freelancing, I got a job at a newspaper in Albuquerque, New Mexico. Then, after four years I felt that I had learned everything I could from that experience, so I resigned, got in my Volkswagen and drove to New York and began a freelance career there.

After about six months spent gaining credibility with various editors, Bobby Sands went on a hunger strike in Northern Ireland. He was a member of parliament and a member of the IRA, who was a prisoner of H-Block. Violence erupted in the streets of Belfast and Derry, and I got on a plane and went there without an assignment. I just thought, “I’ve got to see if I’m ready to do this.”

I then went on to cover civil wars in Lebanon; wars throughout Central America, including El Salvador, Nicaragua, Guatemala and the US invasion of Panama; wars in the Balkans; wars in Chechnya; the war in Sri Lanka; communist rebels in combat on the island of Mindanao in  the Philippines; the Palestinian-Israeli conflict; the Israeli invasion of Lebanon; popular revolts to overthrow dictators in South Korea, the Philippines and Indonesia; the often violent liberation struggle in South Africa;  genocide in Rwanda; the war against the Soviet occupation of Afghanistan and, later, the American war in Afghanistan; the U.S. invasion of Iraq. And I worked in almost all of those places, not just once, but multiple times.

It’s very difficult for me to put a hierarchy on the different events I've covered. But one was so horrible that, even though I witnessed it, is beyond my capability to truly understand: the genocide in Rwanda, when 800,000 to a million people were slaughtered in the space of a hundred days by their own countrymen, by their own neighbors, using farm implements as weapons. How that could have happened is beyond my capacity to comprehend.

I think when I began, I was motivated by the social value of journalism. But I was also attracted to the adventure and the danger. But the lure of adventure and danger faded, and the sense of purpose became stronger until, at some point, it became the only motivation.

My goal is to reach a mass audience at the time events are still taking place, so the images can become part of people’s consciousness. I aim my images at what I consider to be people's best instincts — compassion, generosity, a sense of right and wrong. The willingness to identify with others. Once awareness is raised about an issue, hopefully it will become part of a dialogue among fellow citizens. That’s the process by which an issue stays alive in the mind of the public, and when an issue is being actively talked about in the public realm, policymakers have to take notice. That’s one of the ways in which change happens, and visual journalism can play an important role in that process.

What happens during combat is unique. What people go through, the intensity of the experience, the being on the thin edge between life and death constantly through a long periods of time, seeing people next to you go down, seeing friends go down, is something that only happens in combat, and I want to document that. I think it's important for people to see that.

In my photographs, I’m attempting to document the conditions of a given situation and what effects those conditions are having on the people who are enduring them. Perhaps, in a more important sense, the image would cause viewers to ask themselves fundamental questions: How did this situation come to be? Are we supporting and condoning this? What are the goals that could possibly justify this? What can be done to stop this?

In 1862, the New York Times reviewer of Alexander Gardner’s work said, “How can you photograph a broken heart?” And then he went on to describe how terrible it is for the mothers of the dead. And at that time, Gardner was not photographing the families or photographing the grief that they were expressing. Whereas I have photographed it many times, and I know it is possible to photograph someone expressing that their heart is broken. I have been moved to tears many times. It's hard to focus through tears, but I do my best.

There are many obstacles to photographing a war. A lot of them are physical. There’s danger, there’s terrain that has to be navigated, there's transportation that has to be organized. There are also emotional obstacles, too. All these hardships have to be overcome in order for me to do my job.

Nor am I immune to danger. I was in Baghdad covering the activities of a single platoon that was working in the most hostile part of Baghdad, just after the occupation took place. I was with a reporter, working on the Time “Person of the Year” issue, which was the American military that year. We got into a very crowded street and the Humvee we were in was stopped with traffic, when someone in the crowd threw a grenade at us. In the explosion, a couple of soldiers were seriously wounded. My colleague had his hand blown off, and I got wounded in my knees and stomach and face. I kept photographing until I had lost consciousness, and I regained consciousness when I was in the field hospital in the base of the platoon.

I’m highly aware that I’m photographing history as it unfolds, before anything has been written, when it’s impossible to know what will happen from one moment to the next. I feel as if I’m on the edge of time, and I'm making a journey into the unknown.

Images are one of the means by which people remember history. In many ways a photographic image is the first thing that enters one’s mind when we think about a historical event that occurred since the invention of photography. Photographs show us the reality on the ground, not political rhetoric. They hold political and military leaders accountable for their decisions and their actions. 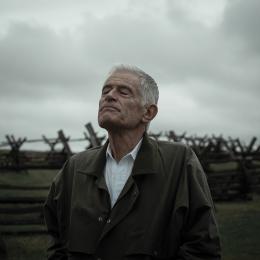 James Nachtwey
James Nachtwey’s first experience in conflict photography came during the Troubles in Northern Ireland, after which he documented turbulent events in South Africa, Latin America, the Middle East, Eastern Europe and the former Soviet Union. He is the recipient of numberous recognitions for his work.