Over the course of the Civil War, at least 600,000 soldiers died from wounds or sickness. The vast majority of these men were treated in hospitals scattered throughout both sections of the country. While the traditional focus has often been about the battles, often overlooked is the daily life in hospitals where soldiers spent weeks, and sometimes even months, recovering.

Soldiers’ experiences in a Civil War hospital varied depending on its location and what kind of hospital they were treated in. At the beginning of the Civil War, both the Union and the Confederate Medical Departments were unprepared for the number of causalities unleashed. In 1861, there were two types of hospitals that surgeons operated in: field hospitals and general hospitals.

Field hospitals were located near the front lines and served as an initial treatment center for those soldiers evacuated from the battlefield. Often in homes, churches, barns, and other local buildings that were taken over to be converted into rudimentary hospitals, surgeries took place on dining tables or doors removed from hinges. Surgeons often had limited amounts of supplies and had to try to treat as many patients as possible. The experiences for many soldiers in field hospitals were chaotic and frightening, like after the first major engagement at First Manassas or after battles with large amounts of wounded like Gettysburg or Antietam.

During the First Battle of Manassas, Sudley Church was converted by Union forces into a field hospital. The pulpit was turned into an operating table and pews removed to make room for the wounded. Blankets and straw were laid down on the church floor for bedding. William Croffut, a local reporter who was present at the battle recorded “it was a sickening spectacle… pulpit had the appearance of a drug store…the church floors were so overcrowded with wounded that it was difficult to get across by stepping carefully”. Homes close to the battlefield were also converted into hospitals. One house called Portici was on the battlefield and converted into a hospital early on the afternoon of the 21st. A visitor to Portici, Fannie Ricketts described the scene:

…. Two men dead and covered with blood are carried down the stairs as I waited to let them pass.  On a table in the open hall a man was undergoing amputation of the leg. At the foot of the stairs two bloody legs lay and through all I went to I went to my husband…In the opposite room are ten dying or wounded men. Next to us are three, one with a gangrenous thigh where it is amputated. The smell is horrible. In another room are five Carolinians, one dying, son of Henry S. Middleton.  His father is with him… Downstairs there are some forty men in various stages of death or possible recovery. Blood runs on the floor, the smell is dreadful, but no language can describe it…

Many of these hospitals were understaffed so surgeons and nurses worked tirelessly to treat patients, sometimes to the detriment of their own health. Many medical personnel worked themselves to exhaustion. One such example was Dr. Edward Craighill, who worked in the Pringle House Hospital after first Manassas:

I attended to my wounded, making them as comfortable as I could. I had not a mouthful since breakfast and tried to find something to eat, at which I was not successful. I next thought of getting a little rest, and sleep if possible, knowing there was a strenuous day ahead of me next day. There was no place under shelter for a well man, and my only hope was to find the sheltering arms of a friendly tree. It was raining but not heavily, and wandering in the dark, I was attracted by a fire under one of the trees in the Pringle yard…

Two years later, a similar experience happened at Gettysburg. An observer from the Christian Commission in Gettysburg remembered one of the many hospitals in town, a Federal hospital along Rock Creek, that reflected the typical state of the hospitals throughout town:

The men here were in terrible condition. They lay upon the damp ground, many of them with nothing under them. In this hospital there were a usually large number of amputations, the amputated stumps lying directly on the ground; except when now and then elevated a little upon a handful of straw or a bunch of all rags. Many of the men, perhaps most of them, were in want of clothing. Suitable food was not to be had. The surgeons were overworked. There was an insufficient number of attendants.... nearby were nearly or quite a thousand rebels, most of them severely wounded... shrieking and crying for assistance continually...Destitute of clothing many of them nearly naked and covered with filth, without tents, lying in the mud...

Much of the time, soldiers had a very different experience in the general hospitals that were further away from the front lines.  Many of these hospitals were located in major cities such as Richmond, Alexandria, Washington D.C., Philadelphia, or Knoxville. Soldiers usually arrived at these hospitals after they were stabilized at a field hospital. Recovering at a general hospital could spend weeks or months before a soldier was well enough to be sent back to the front lines, discharged, or assigned to the Invalid Corps as guards or clerks.

In the general hospitals, it was easier to follow the Medical Department’s rules and regulations set forth to maintain the cleanliness of a hospital and the well-being of the patients. Many general hospitals were fully equipped with their own kitchens, laundries, mess-rooms, baggage-room, linen-room, storeroom, and guardhouse. Some hospitals even had a bakery, guardhouse, chapel, bathhouse, dead-house, as well as offices, houses, stables and privies in which nurses, surgeons, ward-masters and matrons worked. Within these buildings, hundreds of medical staff worked to treat patients.

Daily life in a general hospital was monotonous for both patients and personnel. For nurses and medical stewards, cleaning was a daily chore. Spittoons, bedpans, and chamber-pots needed to be cleaned, bedding needed to be changed and washed, floors cleaned, and straw changed out of mattresses. Clothing had to be washed, meals cooked, dishes cleaned, and soldiers had to be bathed, and medical supplies needed to be inventoried. At the Academy Hospital in Chattanooga, Tennessee it was ordered that the floors were to be “scrubbed or dry-rubbed, and swept, bedding changed or arranged, and everything put in order between the hours of 5 ½ and 6 ½ o’clock in the morning, both watches assisting in this labor”. Their daily shift included making rounds to check in on their patients, feeding them, changing bandages, and administering medicines. It was during this time that some nurses stopped to talk with patients, write their letters, and provide comfort. Amanda Akin Stearns who worked at the Armory Hospital in Washington D.C, regularly worked an eighteen-hour day. She was “up at six, dispensed medicines, served breakfast, dispensed medicines, served dinner, wrote letters, dispensed medicine, served supper, and wrote letters”.

For soldiers being treated in these hospitals, life was monotonous especially when men were bedridden, with little to do except chat with their neighbors, sleep, read, until the nurses made their rounds, or they had a visitor. Once soldiers were able to get out of bed, it was easier to break up the tedium of the day. One soldier, Albion F. Hubbard of the 1st Massachusetts Calvary was unable to write with his ulcers and so Walt Whitman took up the pen for him, writing for Hubbard on June 12, 1863:

As I have a favorable opportunity, by means of a visitor to the hospital, who is now sitting by the side of my bed, I write you again, making the second time this week, to let you know that I am tolerably comfortable, have good care & medical attendance, & hope to be up before long—have been up & moving around the ward both this forenoon & afternoon though I move around pretty slow as I am weak yet—A member of the Massachusetts Relief society has called upon me & given me a few trifles———My diarrhea is still somewhat troublesome yet I feel in pretty good spirits—I send you an envelope with my address on— Keep a copy of it & this one you please put a stamp on & write to me—Please give my love to the friends in the village & tell them I should like to hear from them, & give them my direction here in hospital—Good bye for the present

Unfortunately, Private Hubbard died on June 20th, 1863, likely due to infection. Private Peleg Bradford, who lost his leg in Petersburg and was recovering in Columbian Hospital in Washington. D.C. wrote of his recovery in the hospital unable to sit up for very long and struggling learning to walk again:

I have got so that I can get out of bed and stand up on one leg. It was fun to see me the other day when I was trying to walk on crutches and… fell flat on the floor, and I have not tried it since... It is very warm here now. It is enough to kill a man to have to lie a bed as long as I have in this hot weather.

Bradford made a full recovery and went back home to Maine. However, not all soldiers were as fortunate. Being in a Civil War hospital was a dangerous place to be full of infection and disease due to a lack of sterilization and limited knowledge of germs. Soldiers were treated not only for battle wounds but illnesses such as dysentery, typhoid, measles, as well. Over the course of the Civil War, two-thirds of soldiers’ deaths were caused by disease and infection, rather than wounds.  Taking care of patients, medical personnel were susceptible to these diseases as well. Life in a Civil War hospital was mundane, tedious, and a struggle for life or death, but without the dedication of the medical personnel treating them and the improvements of the hospitals and techniques over the course of the war saved thousands of lives. 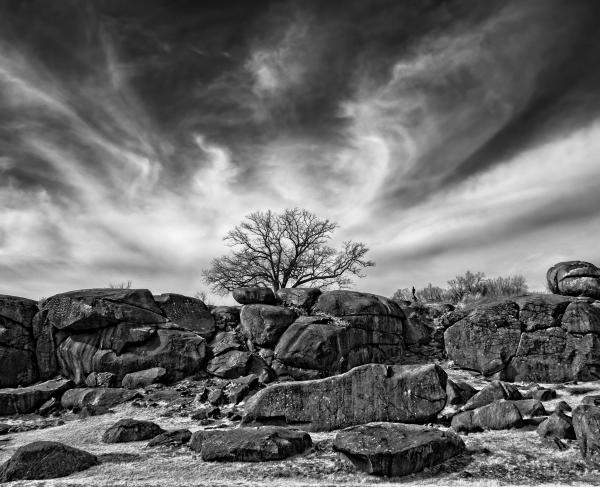 The Capture of Devil’s Den