(Charleston, S.C.) — Once relegated to the history books, Revolutionary War South Carolina has come to new, multimedia life in the form of The Liberty Trail, a digital tour guide from the American Battlefield Trust and the South Carolina Battleground Preservation Trust. The free app that serves as virtual guide to the Palmetto State’s most significant Revolutionary War Battles is now available for download through Google Play and the Apple Store.

“More than 240 years may have passed since the British seized Charleston in 1780 and legendary Patriot figures like the “Swamp Fox” Francis Marion and the “Fighting Gamecock” Thomas Sumter waged their unorthodox campaigns in the swamps and backcountry, but the past is still evident across South Carolina,” said American Battlefield Trust President David Duncan.  “This mobile app provides a glimpse of the past on a modern-day landscape and invites users to imagine walking in the footsteps of those who fought for our liberty.”

Users can leverage the mapping features to see a full list of stops or select sites specific to their travel plans.  Site tours can also be downloaded in advance to accommodate some limited connectivity in rural areas.  To ensure a safe, positive experience, visitors are encouraged to review the travel tips for hitting the backroads.

“It’s thrilling to be able to share incredible places where it feels possible to touch the past with so many South Carolinians and visitors to our state,” said South Carolina Battleground Preservation Trust Executive Director Doug Bostick. “Too few know that we are surrounded by the sites where the American Revolution was decided.”

The American Battlefield Trust has created some two dozen apps for battlefield trails and sites, including the Gettysburg AR Experience, the Yorktown Virtual Tour Guide and the Road to Freedom, which connects sites related to the African American experience in Civil War-era Virginia.

“Mobile technology, like The Liberty Trail app, gives us an opportunity to build battlefield park experiences for visitors that are memorable,” commented Trust Chief Digital Officer Lawrence Swiader. “Every step a visitor takes is full of purpose with the app as a companion.”

Future iterations of the app will further enrich the experience to include features such as augmented reality, local insider tips for lodging and dining, and short videos. Thanks to funding support from the federal American Battlefield Protection Program and State of South Carolina, elements like an augmented reality rendering of the colossal Horn Work in Charleston’s Marion Square will soon be brought to digital reality.

America’s independence was secured in South Carolina across its swamps, fields, woods and mountains, events of 1779-1782 directly leading to victory in the Revolutionary War. The Liberty Trail vision looks to permanently protect more than 2,500 acres of battlefield land and, ultimately, link nearly 80 sites, including five new parks created through the initiative. Combining land preservation with unique on-site interpretation and cutting-edge digital features, The Liberty Trail will connect visitors to the extraordinary events that came to pass nearly 250 years ago and honor the patriots that decided the Revolution’s outcomes in South Carolina.

The Liberty Trail is a joint effort of the South Carolina Battleground Preservation Trust and the American Battlefield Trust, supported by numerous partners at the local, state, and federal levels.  The statewide driving tour functions as a one-of-a-kind educational and heritage tourism resource through which key battlefields of the Southern Campaign of the American Revolution will be preserved, interpreted, and promoted. For more information on The Liberty Trail initiative, including historic background and a list of those sites that are part of the Initial Phase of the project, visit www.thelibertytrail.org. As The Liberty Trail takes shape, partners, friends, and history enthusiasts are invited to follow its progress on social media using the hashtag #TheLibertyTrail. 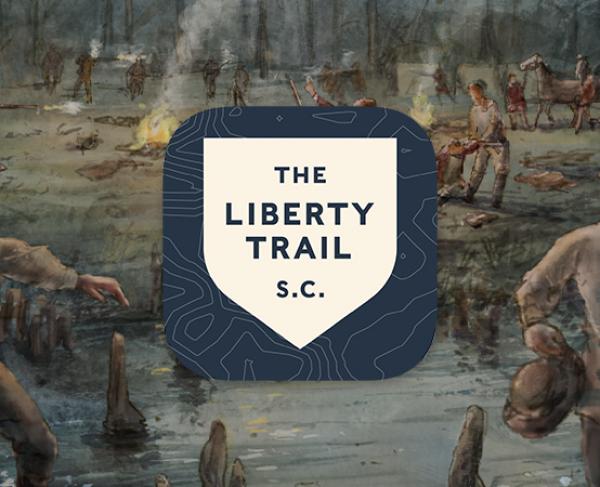