(Sharpsburg, Md.) — Without a doubt, the battlefield at Antietam, site of the September 17, 1862, clash that still represents the bloodiest day in American history, is hallowed ground. Antietam National Battlefield protects landscapes associated with the Union victory that gave Abraham Lincoln the opportunity to issue his Emancipation Proclamation. Now, a period map, uncovered by happenstance by researchers primarily concerned with a different engagement, is shedding new light on the human toll of war by showing the locations where more than 5,800 Americans were buried on that field, often just feet from where they fell.

“Looking at this map, there can be no doubt in the truth of the statement that a battlefield is ‘hallowed ground,’ made so by the blood of soldiers,” said American Battlefield Trust President Jim Lighthizer. “The landscape at Antietam was turned into one vast cemetery, sacred to the memory of those who lost their lives in the struggle.”

More than this symbolic value, the map unleashes a host of interpretive opportunities for historians. “This discovery reveals truths about the Battle of Antietam lost to time” said Trust Chief Historian Garry Adelman. “It’s like the Rosetta Stone: by demonstrating new ways that primary sources already at our disposal relate to each other, it has the power to confirm some of our long-held beliefs — or maybe turn some of our suppositions on their heads.”

Although residing in the collection of the New York Public Library and digitized by that organization nearly two years ago, this map was wholly unknown to experts in the field, including the National Park Service staff at Antietam National Battlefield, until this spring, when researchers from the Adams County Historical Society (ACHS) in Gettysburg, Pa., happened upon it. They were looking for information on the mapmaker, Simon G. Elliott, who is renowned in Civil War history circles for a similarly detailed and often cited study of the Gettysburg Battlefield. ACHS Executive Director Andrew Dalton had begun looking for more details about the somewhat mysterious cartographer, who has a checkered reputation from his work on railroads in California and Oregon. As Dalton looked into what, precisely, brought Elliott east, his colleague Timothy H. Smith scoured other digital collections to compare minor differences in printed copies of the Gettysburg map, hoping to determine the original versus subsequent revisions.

“The New York Public Library has an excellent map collection,” said Smith. “I searched for ‘S.G. Elliott’ and ‘Gettysburg,’ then downloaded the results, so I could look at them in detail. When I opened up the file, I was utterly taken aback and knew I was looking at something extraordinary.”

In addition to alerting his colleague, Dalton, Smith swiftly reached out to the Trust’s Adelman, a close friend and longtime collaborator, looking to corroborate the significance of the discovery. Adelman confirmed the instincts of ACHS’s Gettysburg experts and shared word of the find with Antietam National Battlefield park ranger historian Brian Baracz, who was, likewise, totally unaware of the map’s existence.

“One of the beauties of working with the public is that you never know what’s going to come in the door,” said Baracz. “We have visitors bring us new letters and diaries from participants on a regular basis and those enrich our understanding. But this find exceeds all that — it is on a fundamentally different level.”

The Antietam Elliott Map, like its Gettysburg counterpart, shows significant detail about how the battlefield appeared in the aftermath of fighting. The two maps were likely made at approximately the same time — autumn of 1864, when Elliott came east to lobby Congress on a railroad bill. Although they were recorded a year (in the case of Gettysburg) or two (in the case of Antietam), after the battle, they show precise locations for burials of Union and Confederate soldiers (differentiated by the icon used), as well as horses, because they were based on surveys done immediately following the fighting.

The Battle of Antietam saw some 23,000 total casualties, with the National Park Service interpreting that between 4,000-5,000 of those are individuals who died on the day of the battle. Although historians are still performing analysis of the map, more than 5,800 soldier burials are individually recorded, typically in groups associated with a particular regiment, also noted on the map. Field burials often saw soldiers interred by comrades, very close to where they fell, meaning that the map confirms the locations where units were engaged on the field.

“In some ways, this Antietam map is even better than the Gettysburg one,” said ACHS’s Dalton. “On the latter, Elliott identified 18 soldiers by name when he marked their graves, but at Antietam, he was able to do that for more than 50. And for each of those, we can tell a story.”

This type of detail opens up remarkable interpretive opportunities, especially when paired with other documentation of the battle, like diary entries describing the work of burial crews and the aftermath photographs taken by Alexander Gardner, the echoes of which can be found in the Elliott Map. Likewise, the visual representation of exactly where men died and were buried — although the number of burials made at Antietam National Cemetery demonstrates the vast majority of these internments have been moved off the field, occasional discoveries of human remains do occur at Antietam and other sites — have major implications on battlefield preservation initiatives. The Elliott map shows that dozens of men were once buried in the immediate vicinity of the national park’s visitor center. The 461 acres that have been protected by the American Battlefield Trust show evidence of more than 600 burials.

“I have no doubt that this is going to change the way we understand and preserve Antietam,” said Tom Clemens, president of the Save Historic Antietam Foundation, one of the country’s top battlefield friends organizations. “Knowing where that sacred ground lies is vital to us as preservationists. It underscores the urgency of our task”

Those interpretive shifts will become evident, as the National Park Service is making plans to integrate the Elliot Map, both visually and interpretively, into exhibits at the Antietam National Battlefield Visitor Center.

Organized in 1888, the Adams County Historical Society preserves over one million historic items from the Gettysburg area. Its headquarters is also home to the Battle of Gettysburg Research Center, a library and archive assembled by and for students of the Civil War with an emphasis on the roles played by local civilians before, during, and after the Battle of Gettysburg. Learn more at https://www.achs-pa.org. 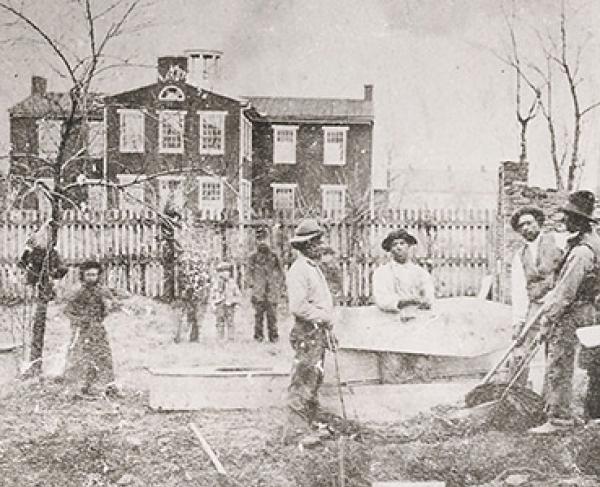