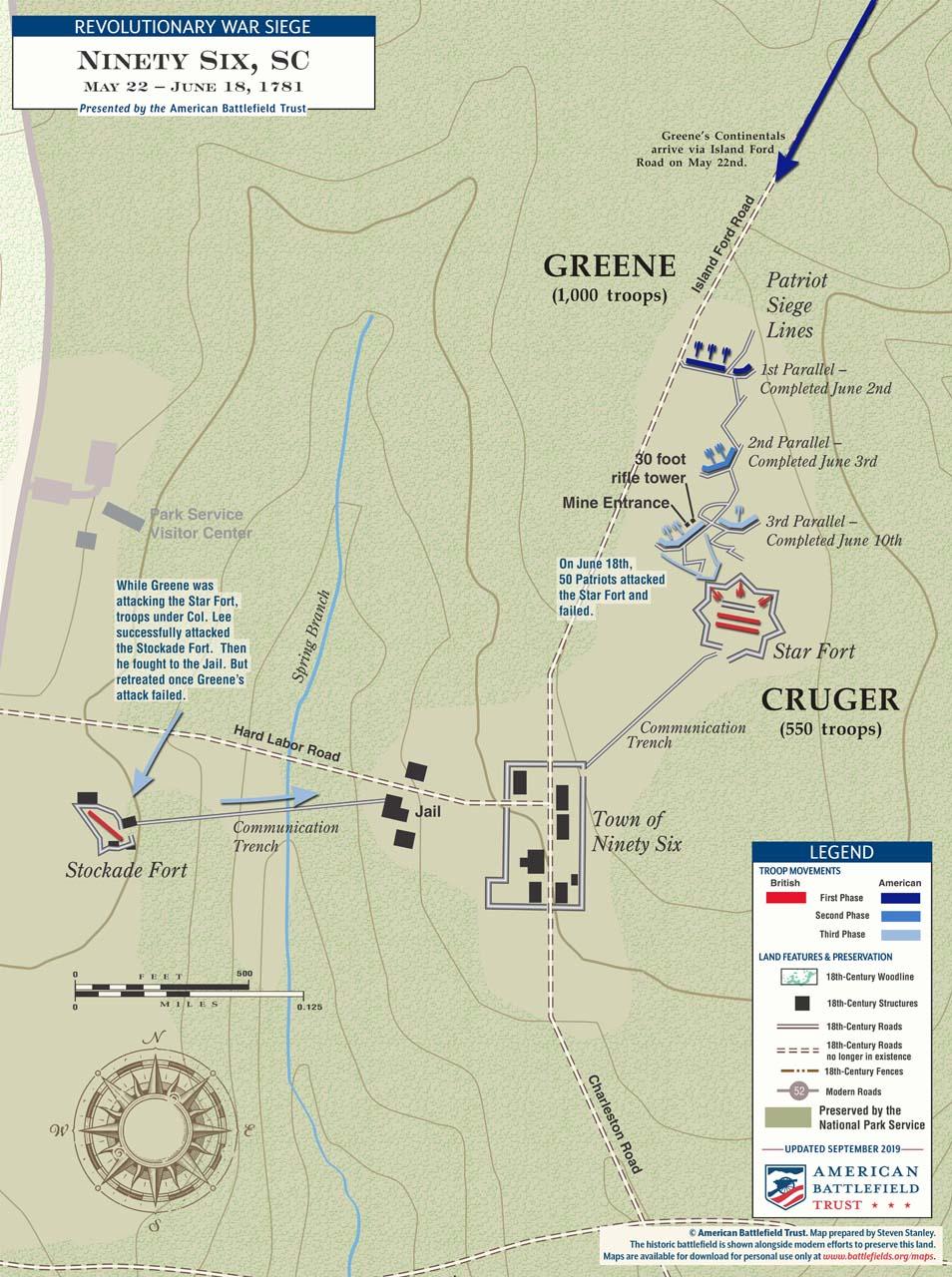 The town of Ninety Six, South Carolina, is one of the most strangely names hamlets in the state. There are numerous accounts as to why the settlement was named Ninety Six. It was supposed to be 96 miles from the nearest Cherokee village—it was not. The name may have its origins with a Welsh word. Or it may have to do with early notations on maps. Regardless, Ninety Six was the intersection of twelve roads and was the home of two towns and a trading post. It was also the scene of military action throughout the American Revolutionary War.;

War came quickly to Ninety Six, where patriots and loyalists were already sharply divided by the struggle with the frontier Cherokee.  In July 1775, when patriots suspected that the loyalists were supplying the Cherokee, they initiated a three-day battle for control of the town that culminated in an uneasy truce. This, the first major engagement outside of New England, brought a national character to the burgeoning revolution.

Tensions simmered through the 1770s while the British Army continued to focus on the war in New England. In the wake of the battle of Guilford Courthouse, General Nathanael Greene initiated a campaign to wrestle the Carolinas from British control. In May of 1781, Greene set his sights on a British garrison of 550 men defending Ninety Six.

Ninety Six was protected by the formidable Star Fort and the smaller Stockade Fort.  Its garrison was made up almost entirely of Loyalists. Greene initiated siege operations. Much of the work was overseen by Tadeusz Kościuszko, a Polish born officer, who lent his engineering skills to the patriot cause since the Saratoga Campaign. Patriot soldiers laid siege to the town, cutting trenches that zig-zagged towards the British positions.

Defending the South Carolina Backcountry were men from the South and ironically from New York. Colonel John Cruger, Jr., the garrison commander, was a New Yorker by birth and a former mayor of New York City. Greene's siege lasted from May 22-June 18, one of the longest sieges of the Revolution. The loyalists managed to maintain control of the Spring Branch water supply, thus averting a major crisis.  Meanwhile, Greene divided his force and sent Harry Lee and his legion to capture Augusta, South Carolina, which they did, returning on June 8.

Soon after, Greene received word that British troops led by Lord Rawdon troops were marching from Charleston to relieve Ninety Six. Greene went for broke on June 18th and launched an assault. The fighting was intense. American storming parties captured both forts with supporting fire from sharpshooters in a siege tower on the American lines. The redcoats rallied, however, and retook the forts with bayonets and clubbed muskets. Greene broke off the attack and withdrew, ending the siege. The Loyalists eventually withdrew as well, burning the town behind them.

Although Greene had failed to take Ninety Six, he had begun his campaign boldly.  His continued operations in the Carolinas would prove essential to overall American victory in the Revolution as he drove the Tories from their backcountry outposts to the safety of Charleston.