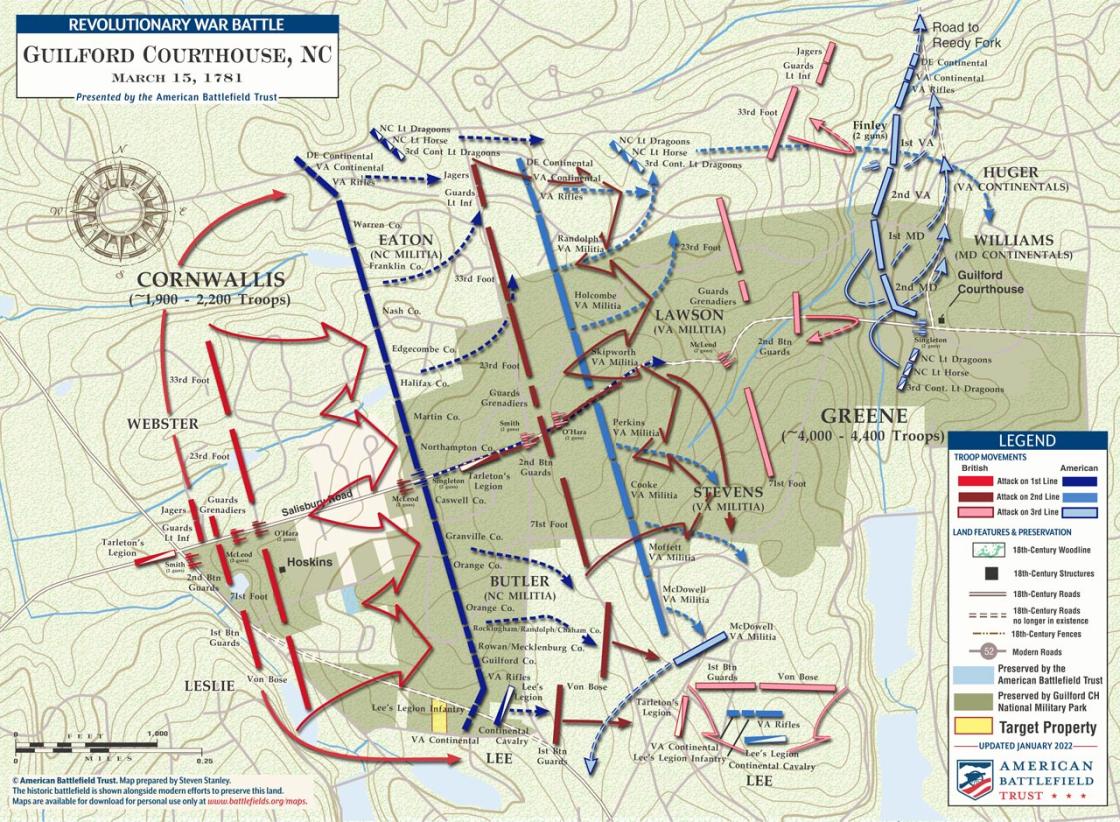 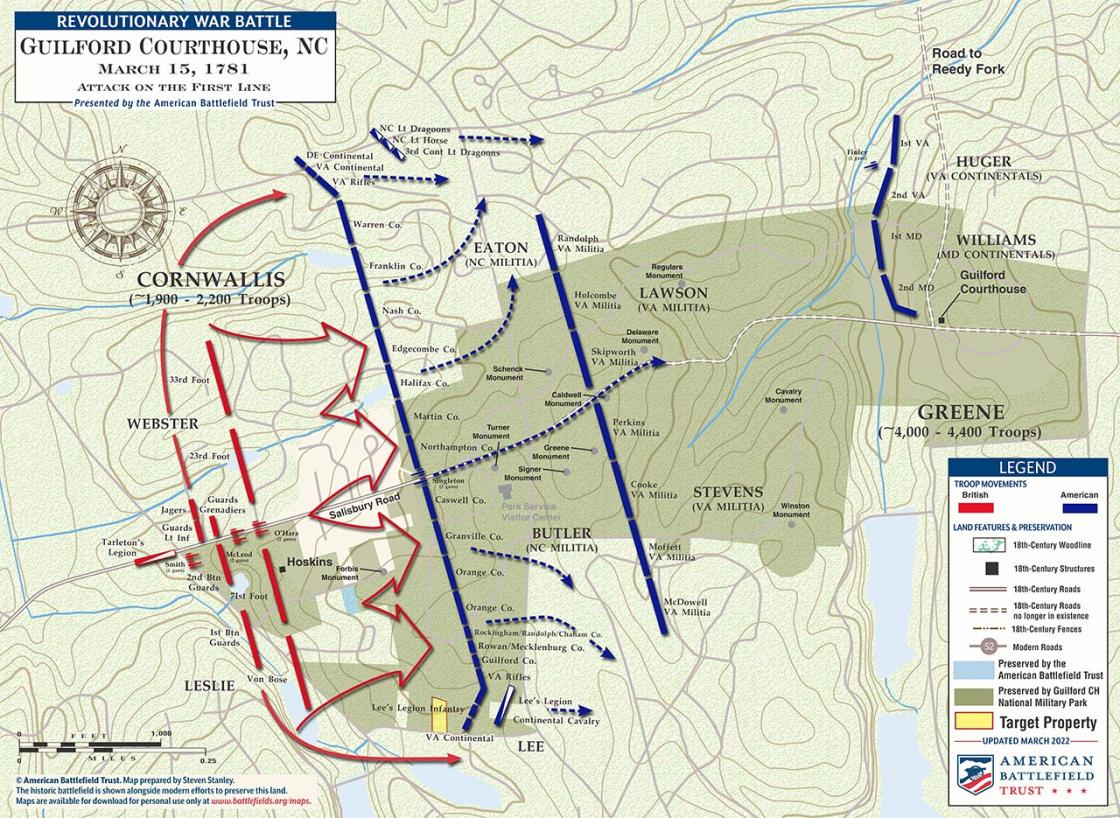 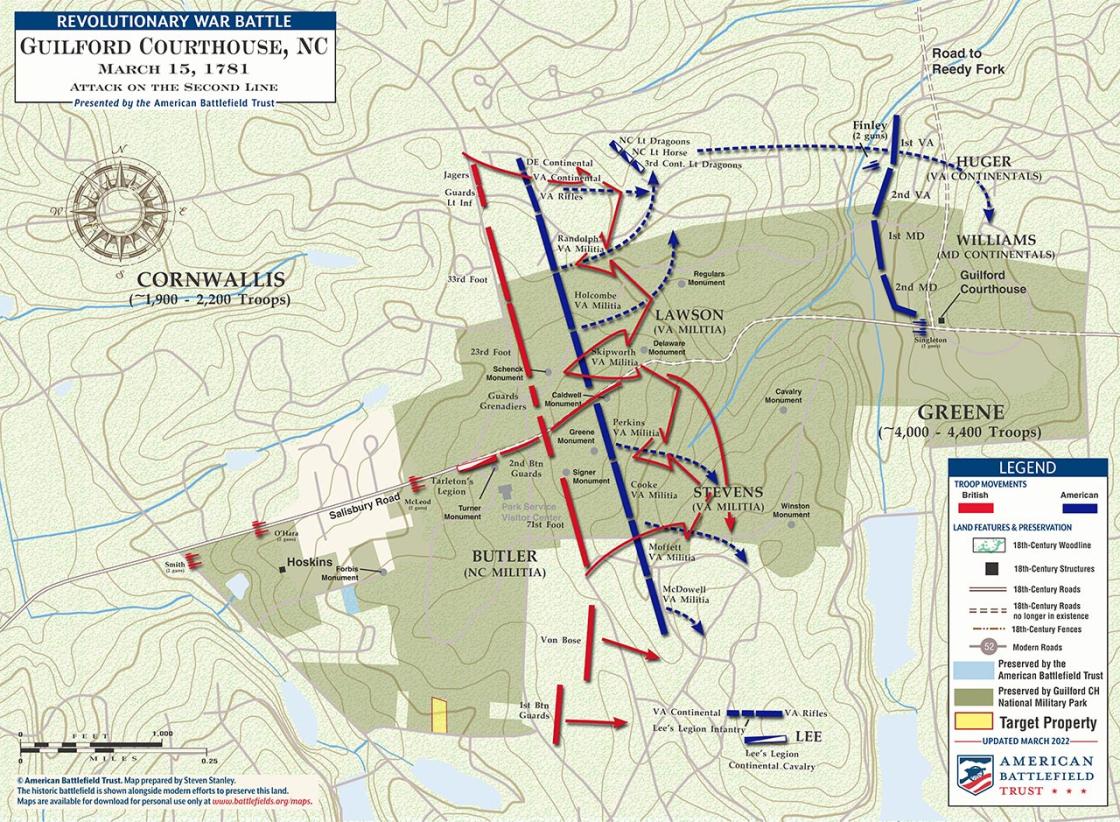 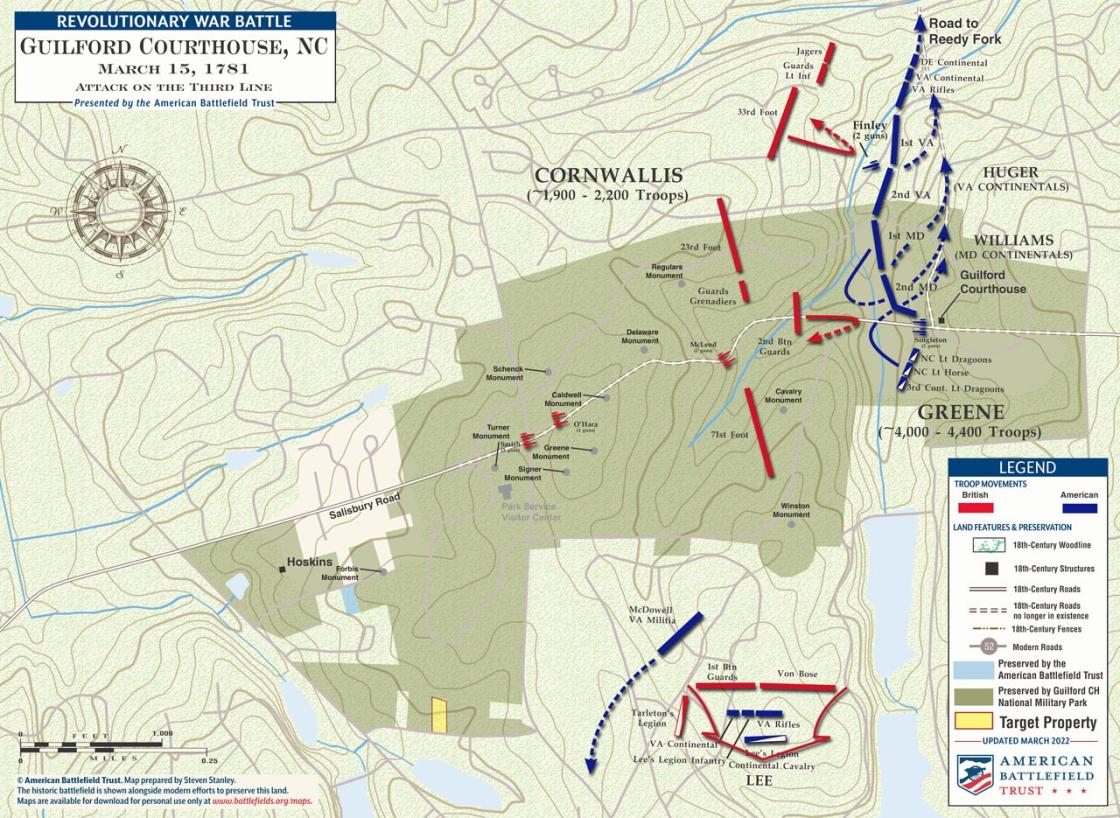 On March 15, 1781, Greene arrayed his arrayed his army for battle near the Guilford Courthouse (modern day Greensboro, North Carolina). Utilizing similar tactics to Morgan at Cowpens, Greene set his men in three lines. The first line consisted of North Carolina militia, bolster by two cannon, riflemen, and dragoons on the respective flanks. The second line consisted of Virginia militia. The third and final line was the backbone of the army-Virginia, Delaware, and Maryland Continentals and eventually four cannon.

Although his army was outnumbered by a factor 2-to-1, Cornwallis went on the offensive. After a morning clash between the legions Tarleton and Col. Henry Lee, Cornwallis deployed his army in two lines, with the bulk of his men in the first line, and clashed with Greene’s army on the late morning of March 15. Roughly 40 yards from the American first line, the North Carolina militia opened fire in one grand volley. The British line was staggered, but pushed forward in pursuit of the now fleeing Tar Heels as the flanking units sparred with the American riflemen, who opened and disjointed the British lines.

Entering a wood line, the disjointed British line met the second line of Rebel resistance, the Virginia militia. For perhaps thirty minutes, knots of combatants battled it out in the woods near Guilford Courthouse. Confusion reigned on parts of the line. Americans mistook Hessians as their own Continentals, allowing the Hessians to closely approach and fire deadly volleys into the Virginians. Patriot forces gave ground reluctantly, but their staggered defense slowed and broke up the British ranks.

Cornwallis and his men finally reached the third American line. In piecemeal fashion, the redcoats thrust their attack uphill into Greene’s Continentals. A Maryland Continental regiment broke, and a melee ensued as Continentals and the elite units of Cornwallis’s army battled it out. William Washington’s Dragoons entered the fray and vicious hand to hand combat ensued. Greene had seen enough. Wanting to preserve his core of Continentals, he withdrew his army in good order. The redcoats could not pursue. Although victorious, the Pyrrhic victory cost Cornwallis 28% of his army, and the hard campaign had taken its toll on the British. A few days later, Cornwallis marched his army to the Cape Fear River and Wilmington. After experiencing the obstinate nature of patriots in the Carolinas, Cornwallis set his sights on the richest of the Southern colonies, Virginia. 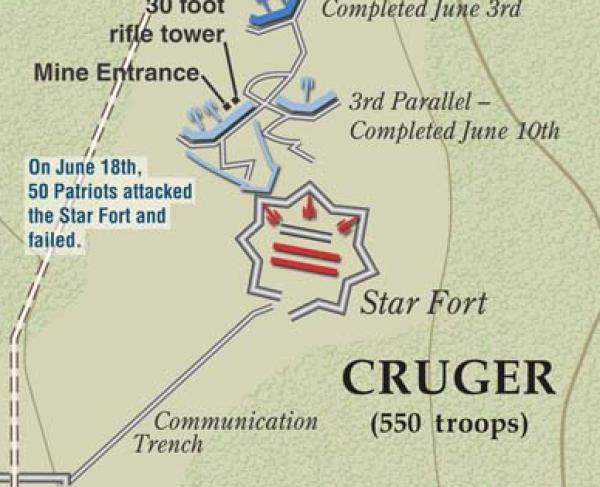