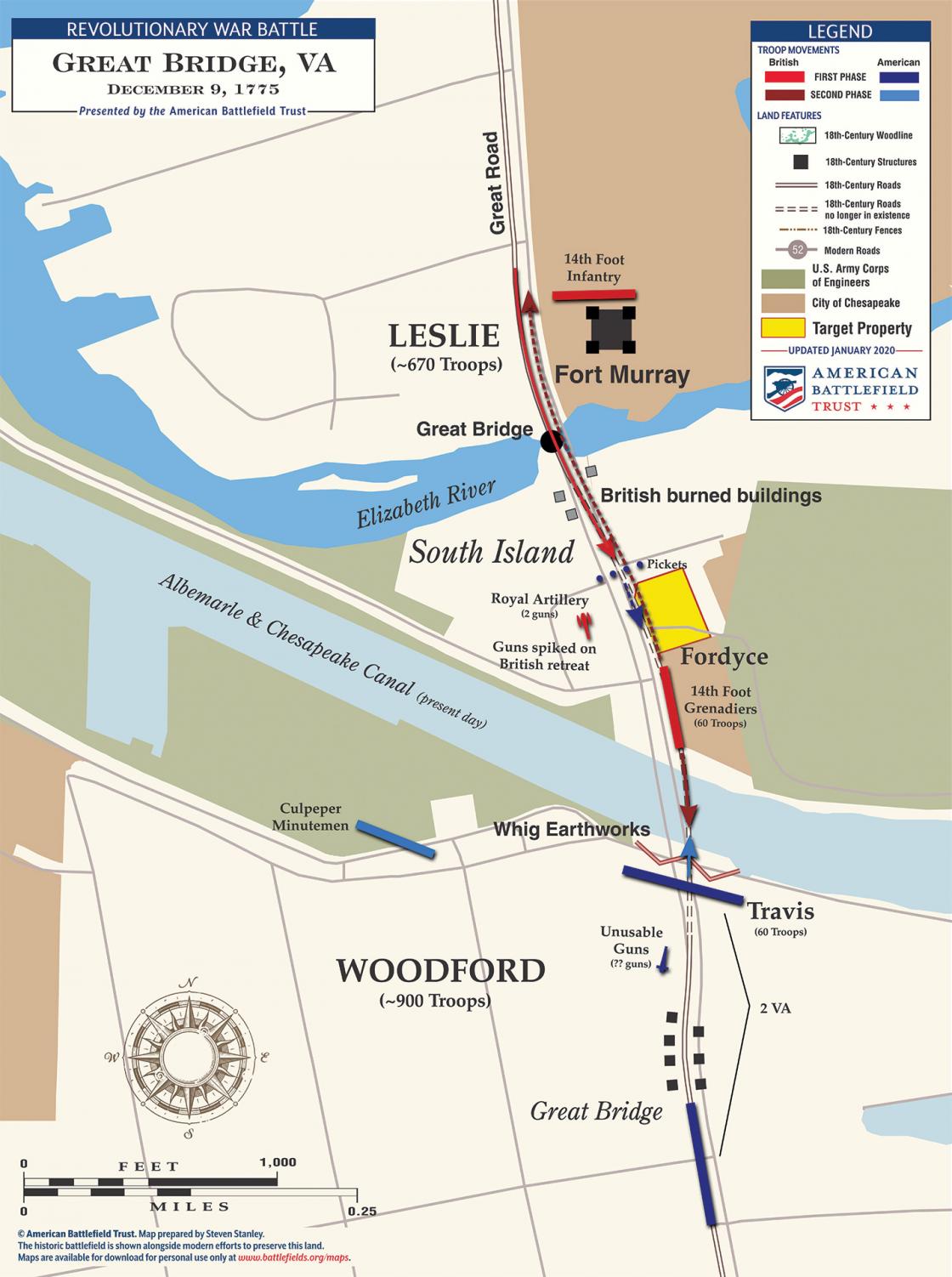 On December 7, 1775, Patriot forces arrived on the bridge’s south side. For the next several days, the Tories and Patriots skirmished amongst the region's bogs and swamps. By the night of the 8th, the Patriot force commanded by Colonel William Woodford had grown to roughly 900 men. Dunmore decided to drive Woodford back.

By November of 1775, Virginia’s last royal governor, John Murray, 4th Earl Dunmore, commanded a force of about 175 British regulars from the 14th Regiment of Foot, 200-300 runaway slaves in his Ethiopian Regiment, and a newly-created Queen’s Own Loyal Regiment formed from approximately 600 Virginia loyalists. With this force, Dunmore went to work to fortify Norfolk, Virginia, and the surrounding environs, but a rumor that patriots were already garrisoned at Great Bridge prompted him to investigate.

Now part of Chesapeake, Virginia, the settlement at Great Bridge was situated along the Elizabeth River and on the main road connecting Norfolk (12 miles to the north) and North Carolina (to the south). According to contemporary accounts, the original landscape around Great Bridge consisted of difficult terrain.

As the British soldiers advanced up the causeway six men abreast, they fired by platoons. As one platoon fired, the other would reload. As the British got closer, the Whigs unleashed a withering volley. Both Batut and Fordice were felled by wounds, and the causeway was scattered with the dead and dying.

Despite his wound, Fordice rose and exclaimed “the day is our own!” The British again charged. Several reached the Patriot works before being shot down. Among the dead was Fordice, who fell with no less than fourteen wounds. The Virginians then advanced and began firing on Leslie’s reserves. His position compromised, Leslie retreated to Fort Murray. That night, the Tories spiked their cannons and abandoned the fort.

The battle lasted less than an hour. By the time it was over, the British had lost more than 100 men killed and wounded. Only one Whig was wounded. Within the next few days, the Whigs entered Norfolk, and Lord Dunmore fled Virginia.