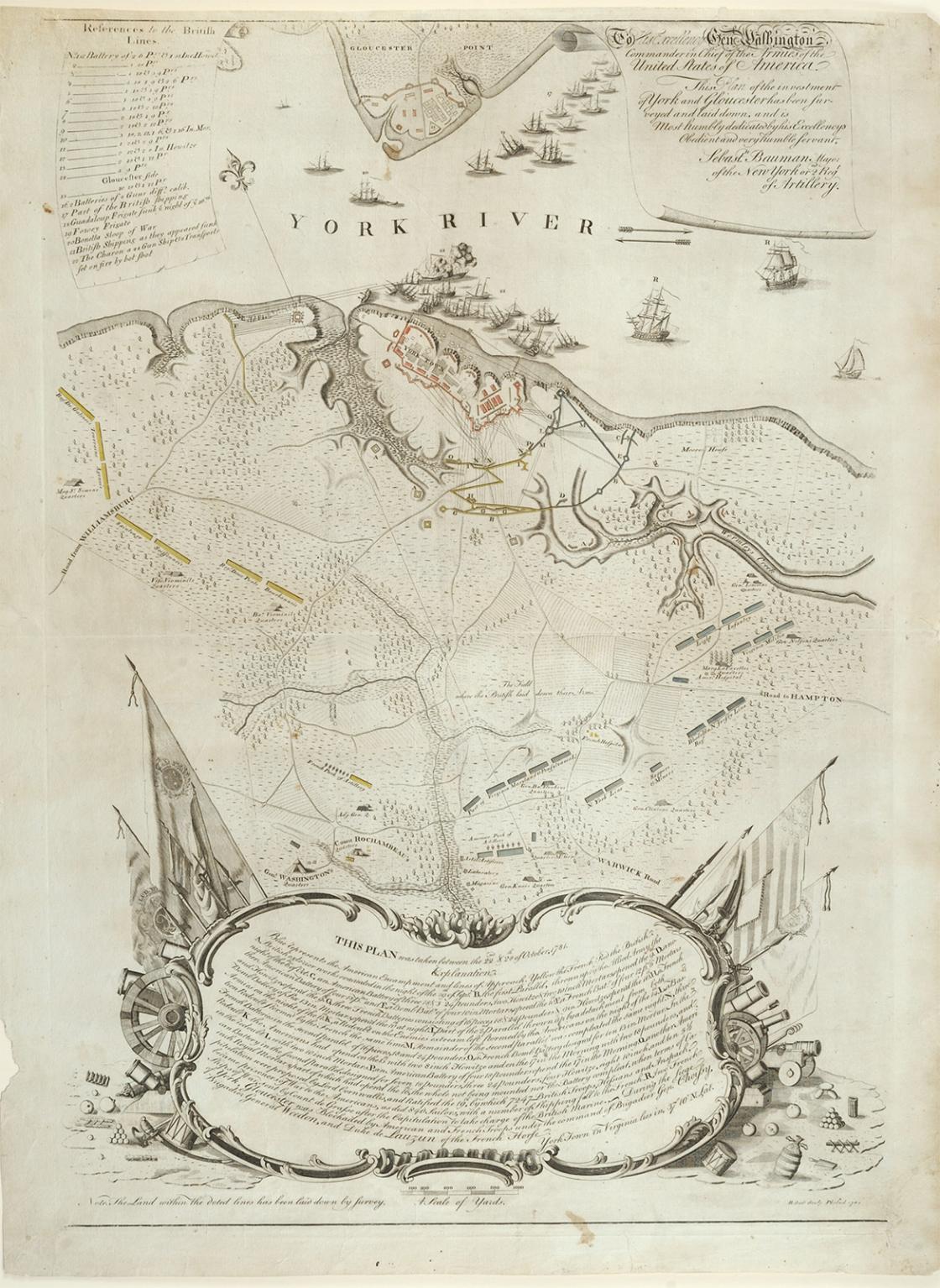 Historic map of the Battle of Yorktown

Based on careful surveys taken on the spot immediately after the British surrender, Sebastian Bauman’s Plan of the Investment of York and Gloucester was the first published American map documenting the decisive allied victory at Yorktown. Bauman’s Plan was, moreover, the most detailed battlefield map of the Revolutionary War drawn by an American engineer. Published in Philadelphia in 1782, it was the source for many later maps of the Siege of Yorktown. With its detailed treatment of fields, wetlands, woodlots, and roads, as well as the camps and fortified line of the American, French, and British forces, it is an exceptionally valuable document for understanding the siege and for appreciating and preserving the battlefield.

The original map is one of the treasures in the Society’s Robert Charles Lawrence Fergusson Collection, which was established in 1988 to honor the memory of a young member of the Society of the Cincinnati in the State of Virginia. While serving as a first lieutenant in the 101st Airborne Division of the U.S. Army, Lieutenant Fergusson was fatally wounded in combat in Vietnam. The growing collection that bears his name includes rare books, broadsides, manuscripts, maps, works of art and artifacts relating to the military and naval history of the era of the American Revolution and to the art of war in the eighteenth century. Funds to support acquisitions to the Fergusson Collection have been provided through the generosity of a member of the Society of the Cincinnati in the State of Virginia who wishes to remain anonymous. The ongoing commitment of funds over nearly three decades has enabled the Society to build a collection distinguished by its breadth and depth. Historians and students of the Revolutionary War use the collection for research nearly every day.

The Fergusson Collection and the library of which it is the most important part are at the heart of the American Revolution Institute of the Society of the Cincinnati, which was created in 2014 to promote knowledge and appreciation of the achievement of American independence. The Institute supports advanced study, presents exhibitions and other public programs, advocates battlefield preservation and provides resources to teachers and students to enrich understanding of our War for Independence and the principles of the men and women who secured the liberty of the American people.

The American Revolution Institute of the Society of the Cincinnati is a proud partner and supporter of the Revolutionary War Trust (formerly Campaign 1776), a division of the American Battlefield Trust.

Learn More: The Battle of Yorktown