In an effort to check the Union army’s advance through Georgia, Maj. Gen. Nathan Bedford Forrest led a 23-day raid culminating in an attack on the Yankee supply base at Johnsonville, Tennessee. Swinging north from Corinth, Mississippi and temporarily blockading the Tennessee River at Fort Heiman, Forrest moved southward along the river’s west bank, capturing several U.S. steamers and a gunboat. On November 4th, Forrest began positioning his artillery across the river from the Federal supply base and landing at Johnsonville. The Union discovered the Confederates finishing their entrenchments and battery emplacements that afternoon, and shore batteries across the river engaged the Confederates in an artillery duel. The Rebel guns were well-positioned, so the Federals were unable to hinder them. Fearing that the Rebels might cross the river and capture the supplies and troop transport boats, the Federals set fire to them. Seeing the fire, the Confederates began firing on the steamboats, barges, and warehouses to prevent the Federals from putting out the fire. An inferno illuminated Forrest’s night withdrawal, and he escaped Union clutches without serious loss. Damages totaled $2.2 million. On the morning of the 5th, some Confederate artillery bombarded the depot but then left. Although this victory further strengthened Forrest’s reputation and destroyed a great amount of Union materiel, it failed to stem the tide of Union success in Georgia. By this time Forrest had often harassed the Union Army, but, as this engagement demonstrated, he could not stop their operations. 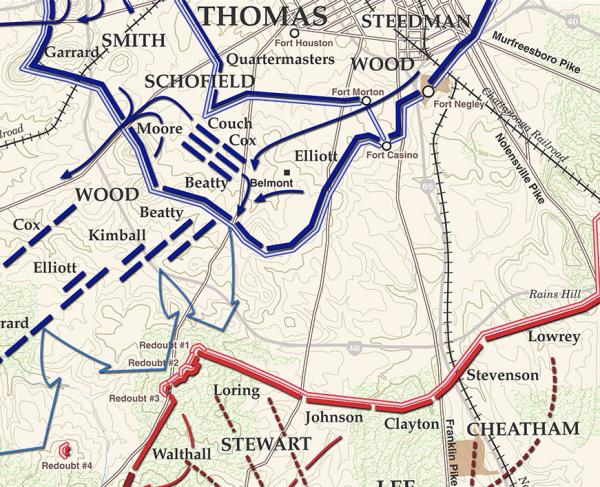 The Battle of Johnsonville is the focus of two Tennessee state parks: Nathan Bedford Forrest State Park on the west side of the Tennessee River, and...
Details and Itineraries »