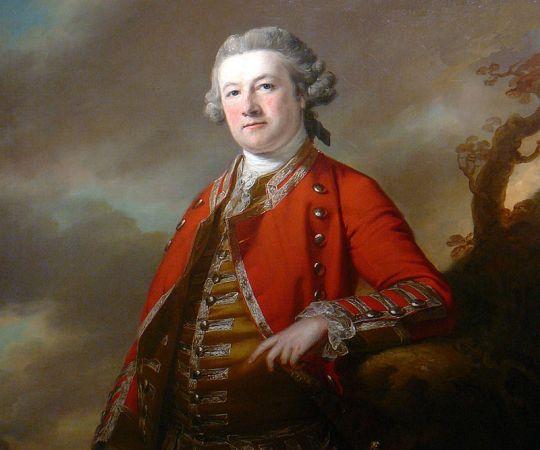 Sir Robert Pigot was born in London in 1720 to a family of Huguenot ancestry. His elder brother, George, became the President of the British East India Company and Governor of Madras (now Chennai), while his younger brother Hugh became an admiral in the Royal Navy. While little of his early life is known, Robert did join the British Army long before the Revolutionary War, appearing in the records as a major in the Seventieth Foot in 1758. While in the army he was also elected as a Member of Parliament, and was appointed Warden of the Mint by King George III, and was one of the last to hold the office before its abolishment. He also commanded the Fifty-Fifth Regiment in Ireland as colonel in 1775, after which he is moved to America. During the Battle of Bunker Hill, Pigot commanded the left flank of Howe's army, and led the second assault on the colonists' position. He failed to break the Americans and his attack was repulsed, though he was noted for personal bravery. In 1776, he was promoted to Major General and was placed in command of the British forces occupying Rhode Island. In 1778, a combined French-American force aimed to take the colony back and assaulted Pigot's position on Aquidneck Island. The attack was repulsed and Rhode Island remained in British hands for a little longer but Pigot faced criticism for his failure to capture the retreating army and he soon moved back to England. There he later inherited his brother George's baronetcy, which included his estate at Patshull Hall and a share in a large diamond from India that would mysteriously go missing in the 1820's. Robert Pigot would die in retirement at his home in Staffordshire in 1796.