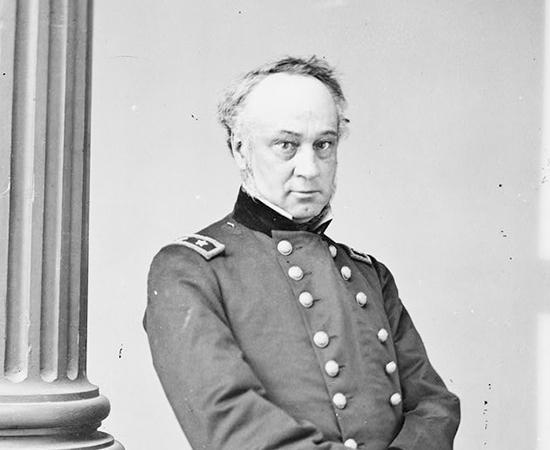 Henry Wager Halleck was born January 16, 1815, on the family farm in Oneida County, New York. Finding that he despised farm work, Henry ran away from home at a young age and was raised primarily by his uncle, who set him on the path to a military education. At West Point, Halleck was a favorite student of esteemed theorist Dennis Hart Mahan, and graduated third in the class of 1839.  As a second lieutenant in the prestigious Army Corps of Engineers, a young Halleck helped improve the defenses of New York harbor and traveled to France to learn about European fortifications. Upon his return, Halleck delivered a series of lectures in Boston which were collected and published in 1846 as Elements of Military Art & Science. His work, which was well received in the community, is considered to be one of the first instances of American military professionalism and earned him the nickname “Old Brains.”

When the Mexican War broke out, Halleck set sail for California. En route, he translated Jomini’s Vie Politique et Militaire de Napoleon into English, further enhancing his reputation as a military scholar of conspicuous ability. By the time of the Civil War, almost every major commander on either side had read it. While he did see combat while out West – at Mazatlán, in 1847 – Halleck was mostly engaged in administrative functions during the war. He became secretary of state of newly-annexed California, helped draft the state’s constitution, and established a law firm in San Francisco. Halleck married Elizabeth Hamilton – Alexander Hamilton’s granddaughter – in 1854 and resigned from the army to devote himself full-time to his lucrative legal activities. Halleck, Peachy and Billings was one of the most prominent law partnerships in the state, and Halleck further added to his personal fortune through land speculation and a stint as president of the Atlantic & Pacific Railroad. He was also a major general of California militia.

When civil war broke out in 1861, Halleck unhesitatingly offered his services to the cause of the Union, and Abraham Lincoln promptly made him a full major general. At the war’s outset he was ranked only by Winfield Scott, George McClellan and John C. Frémont. In November, Halleck was sent to St. Louis to replace Frémont, who had been nothing short of a disaster in command of the Department of the Missouri.  Halleck quickly put his considerable administrative talents to work, and within a few months restored a measure of order to a region defined up to that point by chaos. A series of important Union victories in his department followed: Pea Ridge, Island No. 10, Fort Donelson and Shiloh.  Even though he had not led the troops personally, his organizational work had helped and Halleck, rightly or wrongly, received much of the credit.

When Old Brains himself took the field, however, his ponderous and methodical style found him wanting. He allowed Confederate forces under Beauregard to pull out of Corinth, Mississippi, unmolested, for which he was widely criticized in the press. Nevertheless, in July 1862 Lincoln appointed Halleck General-in-Chief of all Union forces, perhaps recognizing that his administrative skills could be utilized just as well in Washington. Halleck succeeded as an organizer, but failed utterly as a strategist. His time as General-in-Chief was defined by his inability to get along with or have his orders followed by nominally subordinate commanders. McClellan characterized Halleck as “the most hopelessly stupid of all men in high position” (though, to be fair, McClellan also called Lincoln “the original gorilla” and predicted that Robert E. Lee was “likely to be timid & irresolute in action”). Halleck’s superiors were not happy with him either. Gideon Welles wrote that he “originates nothing, anticipates nothing… takes no responsibility, plans nothing, suggests nothing, is good for nothing.” Lincoln determined that he was “little more than a first rate clerk.”

In the spring of 1864, Lincoln demoted Halleck to chief of staff, placing Grant in command of all Union forces. Halleck served out the rest of the war discharging many of the same duties as before, ensuring that Northern armies were properly equipped, fed and reinforced, which he did exceedingly well. After Appomattox and the cessation of hostilities, Halleck was transferred back to San Francisco to command the Military Division of the Pacific. In 1869, he was reassigned to the Division of the South, headquartered at Louisville, Kentucky, where he died in 1872. He is buried in Green-Wood Cemetery in Brooklyn, New York.  History has not been kind to Halleck, who soured his relationships with other leaders of the time and whose military promise, which he displayed so brilliantly on paper, never came to fruition in the field.