Saving a Battlefield from Scratch: Glendale

In 2006, the Civil War Trust listed the battlefield at Glendale (or Frayser’s Farm) as one of the most endangered Civil War battlefields in the nation. The designation was entirely fitting. The National Park Service had independently protected only one acre of the battlefield and, though the Civil War Trust had made progress, time was running out. In the mid-1990s, the Trust had purchased two properties totaling just over 200 acres at the battlefield’s fringes, and had since donated them to Richmond National Battlefield, but at the time the 2006 endangered report was issued, ground had been broken on three housing developments surrounding the core fighting area, and three more were in the planning stages.

Today, however, the situation is drastically different. In the words of historian Robert Krick: “The recent preservation success at Glendale defies comparison. There has been nothing like it before in Virginia.... Never before in modern times has anyone preserved a major battlefield virtually from scratch.... Two years ago one could not even find a safe roadside pull-off at which to pause for basic orientation; now, incredibly and suddenly, almost all of the battlefield will be accessible.”

Such results took extensive negotiations, generous and civic-minded landowners and determination — not to mention a fair amount of luck. Late in 2005, the first piece of Glendale's remarkable reclamation puzzle fell into place when the Civil War Trust acquired a crucial 43 acre tract at the very heart of the battlefield.

That first acquisition opened numerous doors in the tight knit community, giving preservationists real hope for the first time. Suddenly, through family and neighborly connections, the Trust found itself in negotiations for an additional 319 acres of highly significant historic land at Glendale, but at approximately $4.1 million, the price, though fair market value, was steep. Complicating matters was the fact that all the property lay inside the authorized boundary of Richmond National Battlefield Park. This meant that federal matching grants for battlefield preservation, typical of other Civil War Trust acquisition efforts, would not be applicable for the purchase. Preservationists would have to “go it alone,” despite the fact that they were already committed to raising $12 million for another property in Spotsylvania County, Virginia.

Soon support began pouring in. The local Richmond Battlefields Association immediately pledged $100,000. A Richmond-based charitable foundation issued a $100,000 challenge grant that Trust members quickly rose to meet. One particularly poignant gift came from the students of Our Lady of Sorrows Elementary School in Fairfield, Mich. Through their teacher Ron Jones, the Trust’s Preservationist Teacher of the Year for 2005, the students vowed to raise $12,800 — enough to pay for a full acre of the battlefield.  It was an ambitious goal, but one they easily exceeded.

Thanks to the Civil War Trust’s efforts, the amount of critical battlefield land saved at Glendale has skyrocketed. As of June 2012, the Trust has protected 581.5 acres at Glendale, 251 of which have already been sold or transferred to the National Park Service. The remaining acreage is owned and maintained by the Trust with an eye toward eventual inclusion in Richmond National Battlefield Park. Moreover, several other possible transactions are on the horizon.

The battle of Glendale was fought on June 30, 1862. Earlier that spring, the federal Army of the Potomac had launched an offensive up the Virginia Peninsula in an attempt to capture the Confederate capital at Richmond. After pushing within four miles of the city Northern fortunes turned when Robert E. Lee took command of the Confederate army and began steadily driving the invaders back from the capital during his famous Seven Days Campaign. Glendale was the next-to-last engagement of the Seven Days Campaign.

The next day, the armies clashed again, slightly to the south at Malvern Hill, another site of tremendous success for the Civil War Trust. Working independently, Richmond National Battlefield Park protected 130 acres at the site, a total that has been greatly augmented by Civil War Trust preservation efforts totaling 952 acres — 686 of which have subsequently been transferred into the park.

When taken together, the Trust’s involvement at these two adjacent battlefields comes to 1,533.5 acres of protected battlefield, compared to only 131 acres independently acquired at those sites by the National Park Service. When the Gaines’ Mill fundraising effort is completed, a total of 1,818.5 acres of Seven Days Campaign battlefields will have be saved by the Civil War Trust. 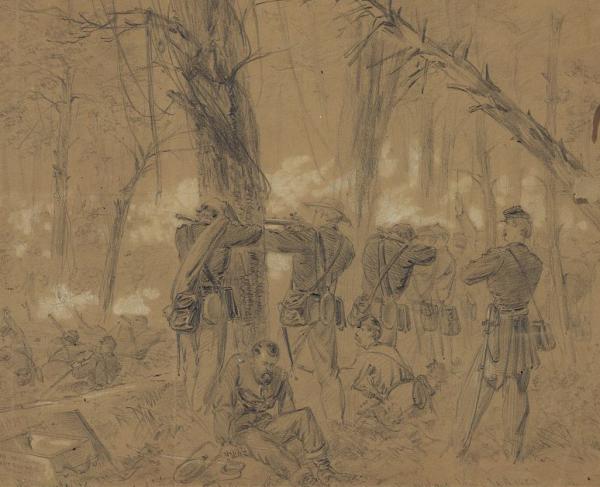