The Radical Republicans were a group of politicians who formed a faction within the Republican party that lasted from the Civil War into the era of Reconstruction. They were led by Thaddeus Stevens in the House of Representatives and Charles Sumner in the Senate. The Radicals were known for their opposition to slavery, their efforts to ensure emancipation and civil rights for Blacks, and their strong opinions on post-war Reconstruction. They were also critical towards many policies of both President Abraham Lincoln and his successor, Andrew Johnson. Throughout the lifespan of the Radical Republican faction, they made enemies with Democrats, many former slave owners, the Ku Klux Klan, and often even found opposition from the moderate Republicans.

During the Civil War, the Radical Republicans created a Joint Committee on the Conduct of War, with which they sought to investigate President Abraham Lincoln’s wartime decisions and monitor the progress of the Union. The Committee worked to keep the Executive powers in check. The chairman of the Committee was Senator Benjamin Wade of Ohio, who would later co-author the Radicals' plan for Reconstruction, the Wade-Davis Bill. Throughout the war, the group often criticized President Lincoln and pressured him to support their legislation. While President Lincoln wanted to fight the war largely for the preservation of the Union, the Radical Republicans believed the primary reason for fighting was for the abolition of slavery. Most of their critiques towards Lincoln were targeted at his lack of aggression in his policies, especially regarding rights for Blacks.

As the end of the war drew near, the Radicals strongly disagreed with President Lincoln’s proposed post-war Reconstruction plans. Whereas Lincoln wanted to peacefully recreate coexistence between the Union and the Confederate States, the Radical Republicans felt that the rebel states needed a strong hand of justice and the administration of harsh punishments for their actions. Two Radical Republicans, Senator Benjamin Wade and Representative Henry Winter Davis penned the Wade-Davis Bill in 1864, an alternative to Lincoln’s Reconstruction plans. The Wade-Davis Bill called for strict conditions and punishments for the Confederate states prior to their reentry into the Union. The Radicals felt strongly that the Confederates needed to be punished for their pro-slavery views and should only be readmitted to the Union after they had abolished slavery among other conditions. They believed that government intervention in states was necessary to ensure abolition and civil rights for Blacks. However, President Lincoln vetoed their Bill, which created more hostility towards him from the Radicals.

Following the end of the Civil War, the Radical Republicans took a stance against Lincoln’s successor, President Andrew Johnson. They saw no effort in this new President's policies to create rights for Blacks. President Johnson would prove to be an opponent to the Radicals as they realized that he cared little about Black rights. In 1866, the tide turned in favor of the Radicals as they gained the majority of power in Congress. With this majority power, they were able to effectively push their own legislation through Congress during the era of Reconstruction. Throughout this post-war period, they fought for the eradication of slavery and civil rights for Blacks. President Johnson tried to stand as an obstacle to the goals of the Radicals and often vetoed the bills that Congress would pass. Overall, Johnson vetoed 21 bills passed by Congress, including many that were geared toward establishing rights for Blacks. However, because the Radicals controlled Congress, they successfully overruled 15 of Johnson’s vetoes, including the Civil Rights Act of 1866 and the Reconstruction Acts of 1867. Eventually, the Radicals in the House of Representatives were successful in impeaching President Johnson, but he was acquitted in the Senate by 1 vote.

The Civil Rights Act of 1866 was an effort by the Radical Republicans to reinforce to the Thirteenth Amendment that abolished slavery and had been passed the year prior. With this Civil Rights Act, the radicals were also taking steps towards establishing citizenship for Blacks by defending their civil rights and granting them equal protection under the law. In 1867, they were successful in passing the Fourteenth Amendment, which granted citizenship to Blacks. The Reconstruction Acts were a renewed effort by the Radical Republicans to take control of reintegrating the previous Confederate states through harsher measures. Their previous attempt to control Reconstruction by means of the Wade-Davis Bill was vetoed by President Lincoln two years prior, but because they now had control of Congress, the Radicals pushed their agenda once more. These new Reconstruction Acts were passed and called for each rebel state to draft a new constitution as well as ratify the new Fourteenth Amendment. Congress, meaning primarily Radical Republicans, would then have to approve these new state constitutions before readmitting the rebel state back into the Union. The Reconstruction Acts also disenfranchised previous Confederate leaders and established that the new Southern leaders would only be those who supported the Union during the Civil War. Furthermore, they deployed military troops to the South to maintain order and to protect the rights of Black citizens. In 1870, the Fifteenth Amendment was passed, granting Blacks the right to vote.

While the Radical Republicans dominated the late 1860s, their power began to dwindle in the early 1870s. At that point, many political leaders believed that the era of Reconstruction was successfully completed and no longer needed Radical supervision. Some Radicals, including Charles Sumner, agreed with this idea, believing they had succeeded in their goals, and left the Radical Republican faction to join the moderates. The opposition to the Radicals became overwhelming as Democrats and moderate Republicans alike accused the Radicals of corruption and accepting bribes during the new Presidency of Ulysses S. Grant. These opponents sought to undo some of the efforts made by the Radical Republicans over the past decades, including granting pardons to the disenfranchised ex-Confederates. In 1874, as their opposition grew stronger, and members deserted, the Radical Republican faction weakened and lost power in Congress. The remaining members of the faction were left to join other Republican groups, such as the Stalwarts.

In the years to come, many of the Radical Republican efforts would be undone. In the corrupt election of 1876, President Rutherford B. Hayes came to power. As part of the corrupt election, Hayes agreed to remove the assigned military troops from the South and thereby end Reconstruction. The removal of the military gave white supremacists the opportunity to regain control of the South. Thus, the period of Reconstruction ended as white Democrats began instituting the Jim Crow Laws and depriving Blacks of their rights, virtually erasing significant progress that had been made by the Radical Republicans. 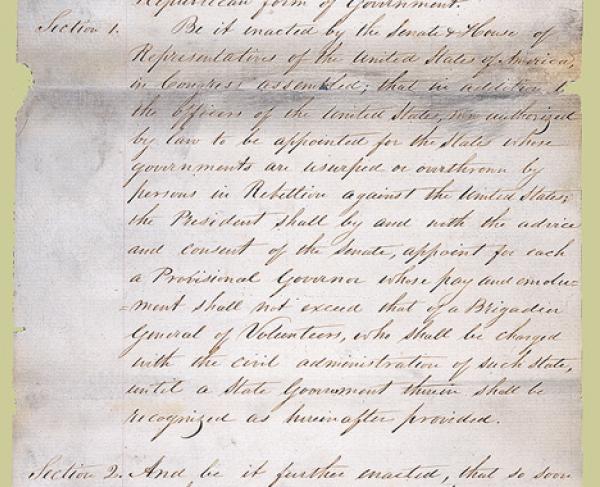