Facing an impending rebellion, British General Thomas Gage decided to seize weapons and gun powder being stored in Concord, Massachusetts, twenty miles northwest of Boston, to prevent violence. Patriot spies soon got wind of Gage’s plan. Paul Revere and other riders spread the word of the 800 British regulars who were dispatched to Concord.

Departing Boston late in the evening of April 18, the King’s troops marched into the small town of Lexington around 5:00 am to find, facing them, a militia company of more 70 men led by Captain John Parker. When the vanguard of the British force rushed forward upon the town green, Captain Parker immediately ordered his company to disperse. At some point a shot rang out-- historians still debate who fired the shot. The nervous British soldiers fired a volley, killing seven and mortally wounding one of the retreating militiamen. The British column moved on towards Concord, leaving the dead, wounded, and dying in their wake. Parker and his men would have revenge later that afternoon.

Arriving in Concord around 8:00 am, British commanders Francis Smith and John Pitcairn ordered several companies, about 220 troops in all, to secure the north bridge across the Concord River and then continue on another mile to the Barrett Farm, where a suspected cache of arms and powder was presumably located. By the time the British arrived at the North Bridge, a growing assembly of close to 400 militia from Concord and the surrounding towns had gathered on the high ground overlooking the north bridge. From their vantage point on the hill they could see smoke rising from Concord, the result of British burning some supplies that they uncovered. Thinking the town was being put to the torch, Lieutenant Joseph Hosmer of Concord shouted to his fellow officers, “Will you let them burn the town down?” The decision was then made to take action. Col. James Barrett ordered his companies to march upon the bridge but not to fire upon the British soldiers unless first fired upon. The Acton Company, commanded by thirty-year old Captain Isaac Davis, was placed at the head of the column. When asked if they were prepared to confront the British troops Davis said, “I haven’t a man afraid to go.”

The Minute Men formed up and marched down the hill. As they did so, the British soldiers, intimidated by the colonial numbers and orderly advance, retreated to the opposite shore and prepared to defend themselves. When Davis’s company came within range, British soldiers opened fire, killing Isaac Davis and also Abner Hosmer, another Acton Minute Man. Major Buttrick of Concord shouted, “For God’s sake, fire!” and the Minute Men replied with their own volley, killing three British soldiers and wounding nine others. This volley is the volley considered “the shot heard round the world.” The rest of the British troops retreated back to town.

Smith and Pitcairn soon ordered a return to Boston, which devolved into a rout as thousands of minute men patriots descended on the area. As the British were attacked from all sides by swarms of angry Minutemen along what is now known as Battle Road. When they reached Lexington, John Parker and his men had their revenge, firing on the British regulars from behind cover. For the next 12 miles, the British were continually ambushed by Minutemen shooting from behind trees, rock walls, and buildings.  The emotions of this fight carried well beyond April 19, inspiring American warriors to "rise up and fight again" even in the face of staggering odds against them.

Having heard of the morning fighting at Lexington, General Gage ordered Lord Percy to march from Boston with a relief column. The column reached Smith and Pitcairn’s men on the eastern outskirts of Lexington, but Minutemen continued to pour in as word spread quickly throughout the area. Among these minute and militia companies were many African Americans, both free and enslaved, who took up arms and fought alongside their white neighbors.

The British conducted a running fight until they could get under the cover of British guns in ships anchored in the waterways surrounding Boston. By 8:00 pm, it was clear that the day had been a disaster for the British. They lost 73 killed and many more wounded compared to the patriot’s loss of 49 killed.

Concord poet Ralph Waldo Emerson dubbed them the “embattled farmers.” They were not American citizens, yet. That would have to wait until 1776 and the Declaration of Independence. On April 19, 1775 they were simply loyal British subjects who believed that they were standing up to defend and fight for their rights. In doing so they changed the world forever. 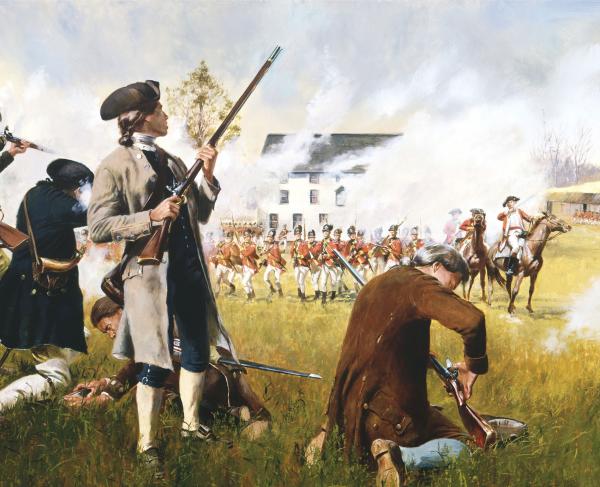