Forward March through the Past

Historic Battlefields and the Modern Military
By David Siry, USMA

How do you study a battle in breadth, depth and context? Certainly, reading widely about a particular engagement — both the primary sources left by participants and the secondary sources that analyze them — is critical, and maps can help you visualize the field. But the best way to gain an understanding and appreciation for a battle is to follow in the literal footsteps of those who fought there, incorporating excerpts from those resources in context on the open fields and woodlots. My thesis applies especially to the cadets under my instruction, young men and women who may someday themselves lead troops in battle.

Staff rides organized by the West Point Department of History combine classroom study and immersive on-field experience. Major excursions held over spring and summer breaks require an application process, as demand dwarfs our ability to provide the intimate atmosphere the process requires. In 2018, groups were formed to study the American Army and the West, the 1944 Normandy Campaign, the Cold War (visiting Berlin, Prague, Budapest, Krakow and Warsaw), the rise and expansion of Japanese imperial power and WWI in literature and memory. Programs designed for classes tend to stay closer, frequently making use of the Civil War battlefields.

I have been lucky to orchestrate two recent staff rides with the cooperation of the Trust. Our September 2017 visit to Gettysburg is described in this essay, which is illustrated with images from our April 2018 journey to Antietam.

Imagine standing at the Snyder Farm near the southern end of the Gettysburg National Military Park Battlefield in the late afternoon. The sun is behind you, and looking east from Seminary Ridge, you can see Little Round Top in the distance, its bare, rocky face standing in stark relief against the dark green leaves of the surrounding trees and the lighter grass and crops between your position and the hilltop in the distance. From this vantage point, the ground between the Snyder Farm and Little Round Top appears to consist of a gentle downward slope, until one reaches the boulder-strewn face of the hill in the distance. Perhaps an attack over this ground will not be terribly difficult? The terrain appears manageable, but the Union sharpshooters posted around the Slyder Farm could pose a problem.

This is the impression given to cadets standing at the junction of the Emmitsburg Pike and West Confederate Avenue, roughly the starting point for the 1st Texas Regiment (part of Jerome Robertson’s Brigade in Hood’s Division) as it began Longstreet’s attack late on the afternoon of July 2, 1863. Cadets are organized into the proper Civil War–era linear formation —two ranks, about one foot apart, standing shoulder to shoulder to maximize firepower to the front while supporting good command and control for the leadership —while we discuss the situations Hood’s soldiers likely encountered on the march and as they arrived on the field. Asking the cadets to visualize their own ranks multiplied manifold to stretch unbroken as far as the eye could see in either direction, more than 14,000 men strong, we begin our march.

Following the route taken by the 426 soldiers of the 1st Texas, our formation moves down a gentle slope and over a Virginia worm fence, only to discover a creek we will need to cross. Thus far, the advance has not been arduous, although scrub brush, large rocks and other occasional obstacles challenge the cadets’ tight formation.

Once across the creek and through the woods, we take the time to dress our ranks and visualize pushing back the U.S. sharpshooters while visualizing trying to keep pace with the units on our right and left. The unforeseen obstacles have challenged the cadets physically and intellectually. As we resume our march, they are confronted with a steep upslope that had not been visible when we started.

As we struggle to the crest of this rough little rise, we are greeted with another unpleasant surprise. In front of us is a steep, boulder-covered downhill, ending at a creek (Rose Run) and a cleared but rocky field (Triangular Field), followed by an even steeper uphill. Houcks Ridge, its crest dominated by artillery and a Union brigade, had been almost indiscernible from the Snyder Farm, visually camouflaged by the taller heights of Little Round Top behind it.

It is not unusual for cadets to gasp as they struggle to comprehend the personal courage required to lead soldiers in their attempt to wrest control of Houck’s Ridge from more than 2,000 Federal soldiers, posted behind a strong rock wall. Their reactions to the dawning comprehension of the challenges Hood’s soldiers faced is a priceless moment not found in any book.

A good staff ride strays from the well-worn paths on an approved map from the visitor center. The depth of understanding we require of our cadets requires going off-road, far from where a tour bus can venture. In doing so, we can address specific questions of commanders’decisions and mindset, as well as soldier experience. Analyzing Dan Sickles’s decision to move III Corps from his initial position along Cemetery Ridge to the infamous Peach Orchard salient is particularly illustrative.

Upon asking my students, “Is this a good position for defense?” from a point slightly north of John Sedgwick’s statue, I will receive a variety of answers. I note for them the woodlot between the George and John Weikert Farms. How far is it to the wood-lot? What is the range of your muskets? Your artillery? How many standoffs do you have? How many times could you load and fire at an enemy approaching from the near edge of the woods? Now I ask them more pointedly: ‘From this position, can you accomplish the mission Meade gave Sickles, tying into the left flank of II Corps and to Little Round Top?’

Then, I move through the woodlot to the western edge, passing the hand-carved memorial to David Acheson of the 140th Pennsylvania. Looking west across the field, does this position allow better fields of fire? Can you still tie into II Corps and Little Round Top? Walk toward the Trostle Farm, and stop at the fence line across the road from Bigelow’s battery. What can you see from here? There are wide open fields of fire, but you are on a reverse slope. How far away is the crest of the ridge? Can you still tie into the left flank of II Corps and Little Round Top? Finally, walk southwest to the Peach Orchard. The fields of fire are great, but you are now too far away from both Hancock and Little Round Top. Can Sickles’s assigned tasks still be accomplished?

The questions posed to students and the lessons they can learn from this exercise are best learned by walking the terrain and putting themselves in the commander’s shoes. Is it possible to address the same questions from the classroom or another point on the battlefield? Of course, but the depth gained from walking the terrain magnifies the understanding of the battlefield and the decisions made by the commanders on the ground.

Leaving a staff ride, I always hope that my cadets have gained a deeper appreciation for the experience of individual soldiers, as well as insight into the decision making process of their commanders. Both of these goals will serve our military’s future leaders well. We are lucky to have access to historic battlefields where the landscape remains able to support this type of invaluable education.

David Siry
Lt. Col. David Siry is the director of the Center for Oral History at the United States Military Academy, West Point, and an assistant professor in the Department of History. A 1994 graduate of USMA, Lt. Col. Siry branched Armor, and he has served in Iraq, Kuwait, Bosnia and Haiti.
Related Articles 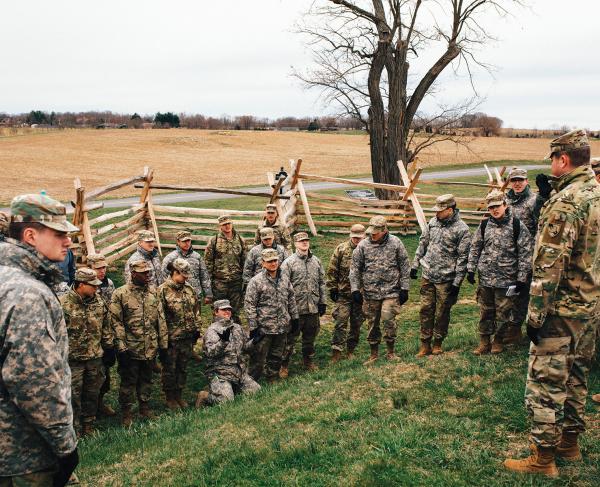