The End of Confederate Trade

By 1864, Wilmington, North Carolina was the Confederacy's last connection to the trade with the outside world. Realizing the importance of this coastal city to the Confederate war effort, Union forces launched an amphibious attack on Wilmington's lone defensive structure, the heavily fortified Fort Fisher, during the winter of 1864.

One of the weaknesses of the Confederacy was its agriculturally based economy. While this provided Southerners with ample amounts of cotton and tobacco, they lacked the industrial means of their Northern opponents. To account for their lack of access to necessary war supplies, the Confederacy would trade cotton and tobacco with the British for the items they needed to sustain their war effort. Due to the coast-wide Union blockade, and the loss of a number of the Confederacy’s key ports, Wilmington, North Carolina was the last major Confederate port by the end of 1864. This essential port was defended by the uniquely designed Fort Fisher. Inspired by the design of the Malakoff Tower in Ukraine, the fort was made predominantly out of soil mounds and sand, which proved to be more effective in absorbing cannon blasts than the traditional brick and mortar. The importance of Fort Fisher was stressed by Robert E. Lee who told the commanding officer, Colonel William Lamb, that if he was to lose control of the fort, Lee would not be able to supply his army.

Realizing that a loss at Fort Fisher would deliver a crippling blow to the Confederacy, Generals Adelbert Ames, Alfred Terry, Charles Paine, and Admiral David Porter, devised a plan to take the fort. In December of 1864, the Federals, led by Major General Benjamin Butler, launched an amphibious attack on the fort, beginning with a Trojan Horse-esque surprise attack. In the middle of the night on December 23rd, the Union Navy floated the USS Louisiana, disguised as a Confederate blockade runner, near the shore of Fort Fisher filled with gun powder. Once they felt the Louisiana was a few hundred yards away from the shore, they ignited the ship. However, due to a serious miscalculation, the ship was more than a mile off shore and the explosion did no damage to the fort. The next morning the Union forces began their bombardment, firing more than 10,000 shells towards the fort. Despite firing such a large amount of shells, the bombardment was “diffuse and not calculated…so wild that at least one-third of the missiles fell in the river beyond the fort or in the bordering marshes” according to garrison commander, Colonel Lamb. During the poorly executed attack, a team was sent to scout out the land face of the fort and assess the effectiveness of a land invasion. Despite being poorly defended, the Federals ultimately decided not to carry out a land invasion and by the 25th of December, the ill-fated attempt to take the fort was suspended. The naval bombardment only resulted in minor damage to the fort’s sea face.

Refocused and now under the control of General Alfred Terry, the great Union fleet returned to the shores of Fort Fisher the night of January 12th, 1865. Colonel William Lamb recounts of their arrival, “From the ramparts of Fort Fisher, I saw the great Armada returning…sunrise the next morning revealed to us the most formidable armada the world had ever known, supplemented by transports carrying about 8500 troops”. That morning, armada opened fire on the land face of Fort Fisher. The long line of floating fortresses rained shells down on Fort Fisher, causing the very earth to tremble. Unlike the previous attempt, this attack was calculated and methodical, and the majority of the shots hit their mark. This relentless bombardment went on through out the day and night of the 13th and 14th, making it impossible for the soldiers inside the fort to repair damages to both the land and sea face. As the sun rose on the morning of the 15th, the Union armada redoubled the efforts. By noon that day, the Union attack had rendered all but one gun unserviceable on the land face and reduced the garrison to only 1200 men.

A desperate Colonel Lamb began gathering every soldier still alive to assist in the defense of the fort, including those who were sick and wounded. During the Union attack on land, Brigadier General Adelbert Ames lost control of his men and the attack became wildly disorganized. Nevertheless, Ames and the rest of the Union forces had gotten such a significant hold on the fort, taking all of the batteries on the sea face and maintaining a hold on most of the northern wall, that the remaining Confederate forces raised the white flag and approached the Union lines to surrender the fort. A month after the Union forces captured Fort Fisher, Union soldiers rode into Wilmington. On February 22, George Washington’s birthday, the mayor surrendered Wilmington to the Union.  From then on, the Confederacy's days were numbered. 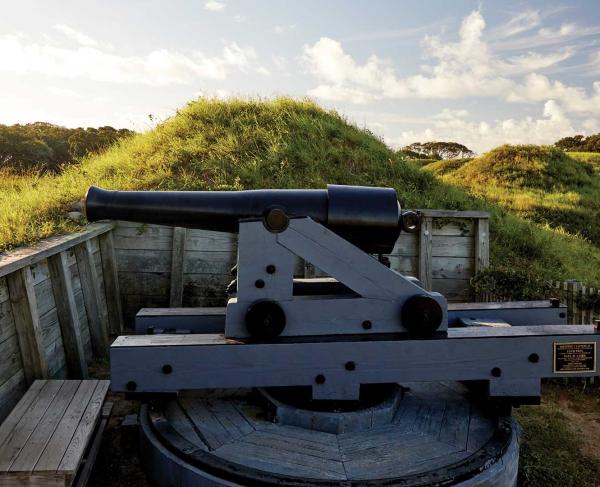 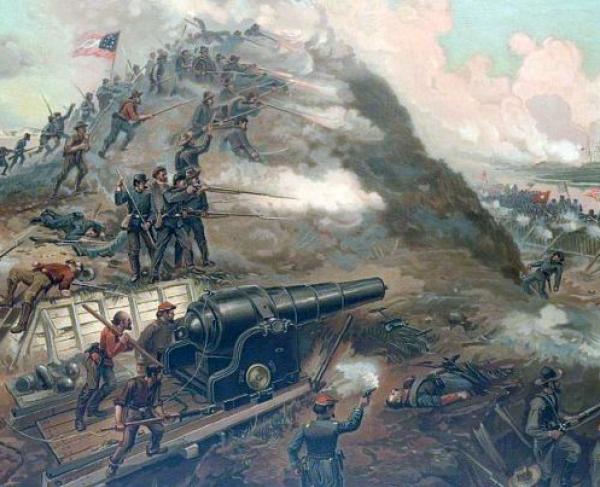