An Interview with Charles Knight

Valley Thunder is the first full-length account in nearly four decades to examine the sweeping combat at New Market on May 15, 1864 — the battle that opened the pivotal 1864 Shenandoah Valley Campaign. Charles R. Knight recently discussed his upcoming book with publisher Savas Beatie LLC.

Civil War Trust: You’ve received some nice advanced praise for Valley Thunder. Why do you think it is striking a chord with readers?

Charles Knight: Even though it was a very small battle by Civil War standards, basically only a small division per side, New Market has always been a popular battle among Civil War buffs. I think the main reason is because of the participation of the cadets of Virginia Military Institute. Over the years, their role in the battle has been greatly exaggerated, but nonetheless their being plucked from their classrooms in Lexington and coming under fire alongside veteran Confederate units and losing 10 of their number makes New Market somewhat unique. The facts that the battlefield is one of only two currently operated as fully interpreted parks in the Valley and that it hosts an annual reenactment of the battle on the original ground gives it quite a bit of visibility as well. As to my book, it has been about 35 years since the last scholarly treatment of New Market appeared, that being William C. Davis’s The Battle of New Market. In the decades since Davis’s work appeared, many new sources have come to light that were unknown during his time. Some offer great detail into the battle, others change some of what has been accepted as “fact” for years.

Can you provide an example or two?

CK: Sure. It has long been thought that the 23rd Virginia Cavalry fought dismounted with the Confederate infantry. However, a closer examination of the accounts left behind by John Imboden’s cavalrymen show that not to be the case. As another example, the editor of the local newspaper witnessed much of the action at New Market, including a preliminary cavalry engagement several days prior to the main battle at New Market. In the account published in his newspaper, he mentions in passing a local “reserve” company of boys too young to join the Confederate army. Yet even though its participation was documented right there by a reliable witness, this particular unit was never mentioned as being part of the New Market campaign, as hardly anything was known of its service in 1864 until a local historian, John Heatwole, was given access to a literal treasure trove of materials that had belonged to the company’s first sergeant, which he then used to write a history of the company, including its role at New Market. To me, the recent trend — not just in Civil War historiography, but in basically all aspects of military history — is not solely to focus on the command decisions made by the generals, but to incorporate how those decisions affected the men in the ranks. I have tried to place New Market in its strategic place in the Spring 1864 campaign and to analyze the command decisions, but I’ve also tried to show what the soldiers themselves — both blue and gray — were thinking in the days and weeks leading up to the battle, what they saw of the fighting itself and how they chose to remember it.

How did weather impact the Battle of New Market?

CK: New Market was one of those rare engagements that was fought almost entirely in the rain. And not just a slight drizzle, but at times a very intense thunderstorm, which, of course could cause a few problems, as black powder and water are not the best of friends. (Laughing.) Although there are very few accounts that mention wet powder or damp cartridges being an issue, many accounts from the VMI cadets mention the adverse effects of the rain. The cadets were armed with Austrian Lorenz rifles, which, unlike the more prevalent Enfield or Springfields which had metal ramrods, had a wooden ramrod. Several cadets complained that the constant wet weather caused their ramrods to swell to the point of them becoming useless and their owners having to discard their rifle in favor of other weapons they picked up off the ground. A more prominent effect of the weather was the mud, which hampered troop movements, and may have helped lead to the capture of some of the Federal artillery. Also the rains caused the local streams to rise well above their usual levels, rendering them impassable. What would be the battlefield at New Market is actually a peninsula formed between the Shenandoah River’s North Fork on the west and Smith’s Creek on the east. Both sides found that these flooded waterways offered a number of advantages and disadvantages. For instance, the flooded streams anchored both flanks securely, but severely limited the options for a retreat. When the Confederate cavalry crossed Smith’s Creek (by bridge) in an effort to flank the Federal army, it was unable to find a passable ford back to the western side of the creek and thus spent the majority of the battle as mere observers.

Your book Valley Thunder contains a lot of primary accounts from soldiers, civilians and politicians. Why do you think these are important to include in a battle history?

CK: In telling of an event, no historian can fully capture or convey the emotion of someone who was actually there as witness to that event, so first-hand accounts are vital not just to battle studies, but to a study of any historical event. Often the after-action reports by the higher- ups ignore some aspects of the battle that they thought to be inconsequential or maybe were even unknown to them completely. Going to lower levels you find interesting personal anecdotes, and in some cases even humor on the battlefield as the bullets were flying thick and fast. And one must beware too of the all-too-present “spin” put on these reports by the commanders to paint themselves in as good a light as possible. When you look at accounts left by those who really had nothing at stake in the larger scheme of things, you do not find this restraint. And the closer to the event a memoir is written, usually the more accurate and detailed it is. And, speaking of primary accounts, the official reports from both the Confederate commander, John Breckinridge, and his Federal counterpart, Franz Sigel, somehow did not find their way into the Official Records after the war, nor were they included in Broadfoot’s more recent “Supplement to the OR ”s. Both reports exist: Breckinridge’s among his chief of staff’s papers in the New Market Collection in the VMI Archives, and Sigel’s in his extensive papers housed at the Western Reserve Historical Society in Cleveland. Yet, because they were omitted from the OR s, they are very seldom cited. So they are both included verbatim as appendecies in Valley Thunder.

You mentioned some of the previously accepted “facts” of the battle being called into question by new sources. What are some of these?

CK: As I mentioned before, I think the biggest is the role of the 23rd Virginia Cavalry. Source material for John Imboden’s brigade at New Market has always been sparse, so earlier writers have not had much to work from. Edward Turner and his 1912 book The New Market Campaign could have answered this question very early on, since Turner spoke and corresponded with many veterans of the battle, primarily Confederates. Yet he provides no definitive answer, indeed, may not even have thought the question needed answering, since Imboden had addressed it in his own writings years earlier. Yet for more recent authors there were enough conflicting and confusing sources out there to make it possible that the 23rd fought dismounted during the battle. This is the conclusion Davis reached, and it has been used by many subsequent authors based on Davis’s book. However, looking closer at the “old” sources as well as comparing them with “new” ones, it seems that the 23rd did not fight dismounted, remaining instead with Imboden and the 18th Virginia Cavalry. The confusion seems to arise from the fact that since Confederate cavalrymen were responsible for providing their own mounts, unlike their Northern counterparts who received government-issued horses, a good number of Imboden’s men were without horses in early 1864 — both in the 18th and 23rd regiments. Horseflesh was so hard to come by, in fact that the 62nd Virginia Mounted Infantry was entirely dismounted in early 1864. The troopers without horses from the 18th and 23rd were formed into several temporary companies attached to the 62nd, and as these troopers acquired mounts they would rejoin their own regiment. Thus, when a casualty report published in the Staunton newspaper a few days after battle included men from the 23rd, without other sources, it could be interpreted to mean the 23rd fought dismounted. But again, taking all known sources from Imboden’s brigade together, it shows — to me at least — pretty conclusively that the 23rd remained mounted. Of course, all the maps on the brochures and signs at New Market Battlefield State Historical Park show the 23rd in line with the infantry ...

Previously, you worked at New Market Battlefield as a historical interpreter. What sort of insight does that give you that other writers might not have?

CK: I actually lived for a summer on the park grounds in the original farmhouse there, which dates to about 1817. This has always made me feel a sort of connection to the battlefield. I spent many evenings wandering the park grounds, so I am intricately familiar with the terrain, especially the “not on the regular tour” parts of the park. In giving tours to school groups, visiting military VIPs, bus tours and regular park visitors, I noticed quickly that many of them had some of the same questions, and most of these were not addressed anywhere in writing. The two most frequently asked ones concerned the family whose farm comprises the core of the battlefield park today and was at the center of the hottest fighting during the battle, the Bushong family, and the other is the history of the park itself. So, one of the appendices in my book addresses in some detail the Bushong family, their farm and how it came to be owned by VMI and operated as New Market Battlefield State Historical Park. Although the amount of literature about battles is in some cases legion, the story of the battlefields themselves is almost forgotten. Some recent works, Tim Smith’s books about Shiloh and Chickamauga in particular, have begun to look at how the land itself was preserved and interpreted, which is an important part of the historiography of the battle.

Buy the Book: "Valley Thunder: The Battle of New Market" is available from Savas Beatie

Charles R. Knight is a native of Richmond, Va. He is a former historical interpreter at New Market Battlefield State Historical Park, and currently serves as Curator of the Douglas MacArthur Memorial in Norfolk, Va. Knight has written articles for various Civil War and railroad publications, including Blue & Gray Magazine, Classic Trains, and the National Railway Historical Society Bulletin. He lives in Norfolk with his wife and son. 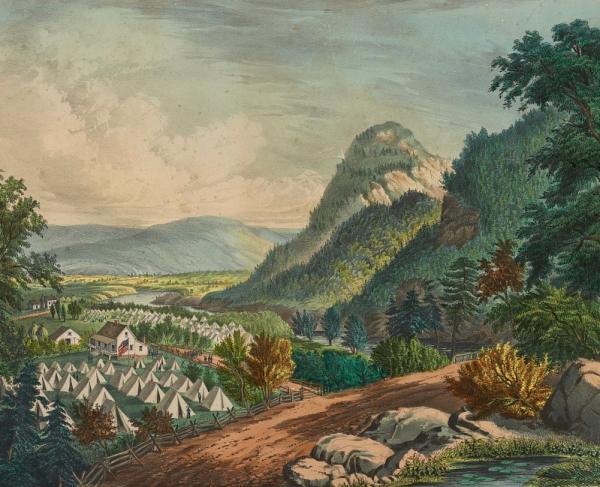 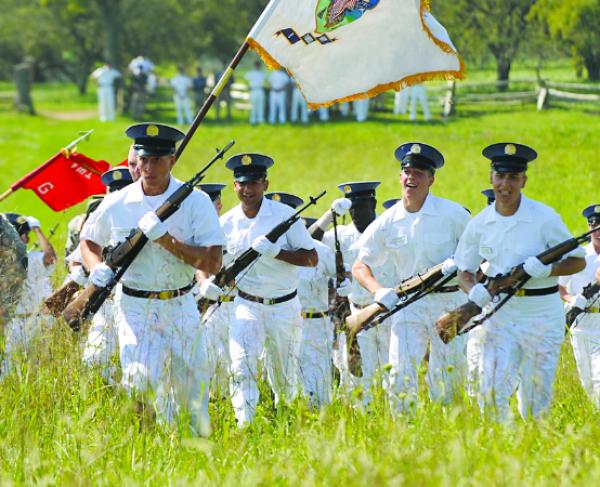 "...and May God Forgive Me for the Order"