The Continental Army's winter at Valley Forge is famously remembered and depicted in famous works of art. Discover 10 facts that you did not know about Valley Forge that may alter your perception of that historic winter.

After the engagement at Brandywine on September 11, 1777, Hessian General Wilhelm von Knyphausen led a British contingent on a strike toward Valley Forge. The goal was to capture the supplies stored there. Alexander Hamilton and “Light Horse Harry” Lee led the American forces that tried to intervene and who were tasked with destroying the supplies there before they fell into British hands. The British burned a few buildings, obtained the supplies, and withstood the interference of Hamilton and Lee. This small action was dubbed “The Battle of Valley Forge.”

At Valley Forge, American soldiers were instructed to build winter quarters. Orders from Continental headquarters instructed the size of the huts to be 14 x 16 feet with 18 inches of clay for insulation. Few tools were available. With no sawmills in the near vicinity, George Washington offered a reward of $100 to any soldier who found a suitable substitute.

Along with the men serving in the ranks and other military capacities, the winter cantonment at Valley Forge had a sizable population of women. The females undertook a myriad of roles, from laundry and cooking to sewing and nursing. Officer wives, including Martha Washington, were also present during the six-month encampment.

Due to shortages of food, lack of proper hygiene, sanitation, and medical knowledge of the time, over 2,000 soldiers perished during the winter. From scurvy to smallpox, dysentery, and other maladies, one out of every six soldiers that marched into Valley Forge in December did not march back out in June.

The supposed “baron” arrived during the winter and took the role of acting inspector general until the position became vacant. He was instrumental in training a model company the rudiments of military drill and in turn created a system of training. His lack of English initially did not provide a hindrance. He also recognized the need to amend European regimented training models to fit the psyche of the American volunteer soldier.

With the loss of Philadelphia, the capital of the rebelling colonies, and the success of the northern Continental forces under General Horatio Gates, a few delegates in the Continental Congress started to think a change in overall leadership was needed. Congress instituted a Board of War, with a few of Washington’s detractors as members. Through back channels, including his aide, John Laurens, who happened to be the son of the president of Congress, Henry intermediaries, and political maneuvering, Washington solidified his hold on the army and silenced most of his critics. The “Conway Cabal” was a part of this larger picture.

Fact #7: Oneida and Tuscarora Native Americans joined the encampment in the later stages.

George Washington believed that the Native Americans could assist in scouting and small-scale attacks to keep the pressure on the British around Philadelphia. The Native Americans also brought much-needed supplies and Polly Cooper, an Oneida woman, taught the soldiers how to use corn husks to make soup.

Although a minor affair, the conduct of the Continental forces, including Oneida Native Americans and riflemen under Daniel Morgan acquitted themselves well. The retreat under enemy pressure showed that von Steuben’s training regimen had begun to take hold. Lafayette had ignored Washington’s orders of not taking an affixed position but Sir General William Howe was unsuccessful in capturing the Frenchman in his last action in the war.

Fact #9: French recognition of the American cause happened while the soldiers were encamped at Valley Forge.

While the Continental Army was encamped at Valley Forge, news arrived from Paris, France of the signing of an alliance between the French and the American colonies. This boosted morale and French money, military supplies, and their navy were heavy factors in eventual American victory in the war.

Fact #10: Valley Forge was not the coldest winter of the war.

In fact, the winter was mild for most comparable winters in Pennsylvania. Although this also had an adverse effect as roads turned to slush and mud as temperatures fluctuated. Snowstorms did blow in and the lack of essential supplies made wintry weather harder for the army to cope with. The following winter at Morristown, New Jersey, was a far colder winter. 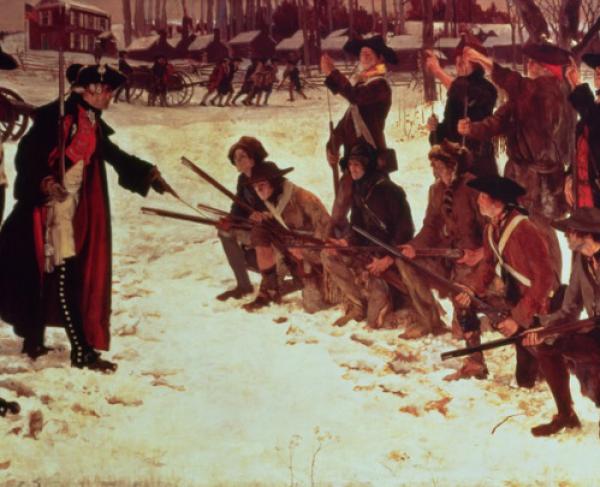