After assuming command of the Military Division of the Mississippi, Union General Ulysses S. Grant fought a series of battles to end the siege of Chattanooga. Expand your knowledge of the Battle of Chattanooga with these ten facts.

Fact #1: Before Grant arrived at Chattanooga, the Army of the Cumberland was starving.

In September 1863, the Union Army of the Cumberland was soundly defeated by Confederate General Braxton Bragg at the Battle of Chickamauga. The Army of the Cumberland fled to the nearby Chattanooga. Bragg followed Rosecrans and took positions on Lookout Mountain and Missionary Ridge, blocking and interdicting the Union supply lines. The lack of supply quickly began to take its toll on the Union army. Many of their horses and mules began to die from starvation. A soldier's ration was four cakes of hard bread and a quarter pound of pork every three days.

On October 10, 1863, a month before the Battles for Chattanooga, General Ulysses S. Grant met with a secretary from the War Department and was given two nearly identical orders and told to choose one. Both orders gave him command of the Military Division of the Mississippi, a new Union Military Division that would bring together all of the armies in the West. However, one order would keep General William S. Rosecrans in charge of the Army of the Cumberland and the other would replace Rosecrans with General George H. Thomas. Grant chose the latter and instructed General Thomas to hold Chattanooga, to which he responded with “We will hold the town till we starve.”

Fact #3: Upon arriving in Chattanooga, Grant’s first move was to open a more reliable supply line dubbed “The Cracker Line”.

On November 3, Gen. Bragg announced that he would be sending General James Longstreet and his two divisions to Knoxville, Tennessee to check the movements of Union forces under General Ambrose Burnside. This movement severely weakened the Confederate siege line. Bragg further weakened his line on November 22 by sending troops under General Simon Bolivar Buckner and General Patrick Cleburne—his best division commander—to aid Longstreet. However, when Grant began his movements, Bragg called Cleburne back to his line to help defend against the Union offensive.

The Battle of Chattanooga consisted of three separate battles that occurred over the course of three days in November 1863. The three battles were the Battle of Orchard Knob, The Battle of Lookout Mountain, and the Battle of Missionary Ridge. However, had everything gone according to Grant’s plan, the fighting over the last two days would have occurred in a single concentrated attack against the entire Confederate line.

Fact #6: The Confederate forces at Orchard Knob were only able to get off one volley before being defeated.

On November 23, Grant observed a number of columns withdrawing from their positions around Chattanooga. Concerned that Bragg was planning to reinforce Longstreet against Burnside, he hoped to disrupt this movement with a quick assault. In order to verify Grant’s suspicions of Bragg’s intention to fortify Longstreet, General Thomas ordered a reconnaissance in force, sending four divisions to gain information regarding the size and intent of the withdrawing Confederates.  Following the successful reconnaissance mission, Grant sent 14,000 troops against the 600 withdrawing Confederates. The Federals were able to quickly overrun the Rebels, only allowing one Confederate volley.  Following the quick victory, General Grant ordered the men to entrench at Orchard Knob and used the 100 foot elevation as his headquarters for the remainder of the fight.

Grant’s presence on Orchard Knob had a great impact on Bragg’s strategy in defending his position at Chattanooga. The Union concentration on Orchard Knob, which was located near Missionary Ridge, resulted in General Bragg refocusing his defensive efforts on Missionary Ridge and leaving few men to defend Lookout Mountain. Bragg also ordered General Cleburne to return from Catoosa Station, where he and his men were preparing to depart for Knoxville in order to support Longstreet.

Fact #7: The Battle of Lookout Mountain is often romanticized as “the Battle Above the Clouds,” however little of the action took place there.

On November 24, "Fightin'" Joe Hooker began his attack on the Confederate left at Lookout Mountain. Initially Grant did not view taking Lookout Mountain as a priority; however at the time of attack Grant instructed Hooker to take Lookout Point, the summit, if it became practicable. Hooker had three divisions under his command led by Brigadier Generals John W. Geary, Charles Cruft, and Peter J. Osterhaus. From 9:30 to 10:30, Geary’s skirmishers made their way through the thick fog and mist. Geary’s men made contact with Confederate Brig. Gen. Edward Walthall’s men one mile southwest of Lookout Point. The Confederates found themselves vastly outnumbered and were quickly driven back. Geary pursued the Rebels as they retreated, eventually meeting Walthall’s reserves at 11:30 outside of the Craven House. The inferior numbers of the reserves were no match for Geary’s men and were quickly scattered despite Walthall’s best efforts to rally his men. The disorderly retreat of the Rebels not only cleared the way for the Union troops to advance, but also rendered the Confederate guns useless as an attempt to fire on the Union soldiers would also result in the possible death of the scattering reserves.

At 1:00 P.M. Confederate Brig. Gen. John C. Moore launched a counter-attack against the surging Union forces. However, his attempt did not last long as he found himself severely outflanked on the right and retreated through the fog. By 3:00 P.M. the fog at the top of the mountain became so thick that the blindly firing soldiers were missing their mark. The fighting did not advance much further up the mountain in the late afternoon and very little of the fighting actually took place “above the clouds,” though the nickname would suggest otherwise. That night Bragg held a counsel with his generals and decided to withdraw from Lookout Mountain to reinforce Missionary Ridge.

Fact #8: General William T. Sherman received faulty information that led him too far north of Missionary Ridge on November 24, the day he was supposed to attack the Confederate right.

The original plan of attack for the 24th was a coordinated attack on the left, right, and center of Bragg’s line. Hooker was to attack at Lookout Mountain, Sherman was to attack Missionary Ridge, and Thomas was to lend support in the center. However, faulty intelligence led Sherman and his Army of the Tennessee to Billy Goat Hill, a summit separate from Missionary Ridge. Because of this faulty information, the attack on the Confederate right became a coordinated effort between General Hooker, who attacked Missionary Ridge from the south at Rossville Gap, General Sherman, who attacked from the north at Tunnel Hill, and General Thomas who attacked the center of Bragg’s line that occurred on November 25th.

Fact #9: The grand Union charge up Missionary Ridge was unplanned.

By 3:00 P.M. on November 25, General Grant had become worried about the fate of Sherman north of Missionary Ridge. Realizing that he was in trouble and the Union had only a few hours remaining to secure a victory, Grant called for Brig. Gen. Thomas J. Wood of Gen. Thomas’s Fourth Corps to carry the rifle pits at the base of the ridge. Grant hoped that such a demonstration would put enough pressure on Bragg to send troops from his right to the center to defend the rifle pits, relieving pressure on Sherman’s men.

After Wood’s men had taken the rifle pits, they realized that it would be impossible for them to stay in that position without being wiped out by Confederate artillery. Despite their orders to hold their position, the Union troops began to advance up Missionary Ridge. The Federals fought through Confederate artillery fire with great energy, as they had been held in restraint for much of the battle. As the Union troops fought at the breastworks, the Confederate forces began to retreat and eventually the center of Bragg’s line was completely broken by the Union advance.

What was originally meant to be a demonstration to help Sherman secure a victory in the north, turned into what one officer called “the grandest sight I had ever witnessed” and resulted in victory for the Union. In fact, Grant’s three major victories at Orchard Knob, Lookout Mountain, and the Confederate center were all planned demonstrations turned full on attacks, while his planned assault at Tunnel Hill was a failure.

Fact #10: The American Battlefield Trust and Chattanooga National Park have collectively saved several thousand acres, but there is more to be done.

Efforts from both the American Battlefield Trust and the Chattanooga National Park organization have led to the preservation of thousands of acres of precious historic land. However, there are still opportunities to continue the preservation efforts already in place.

Learn More: The Civil War In4: War in the West 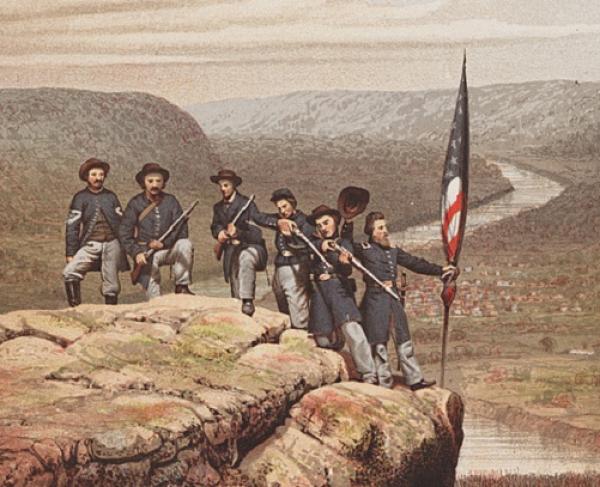