Fact #1: The Battle of Ball’s Bluff was the result of a “slight demonstration.”

Three months after the Battle of Bull Run, the Union and Confederate armies occupied a relatively stagnant front along the Potomac River.  On the Virginia side of the river, Col. Nathan “Shanks” Evans, commanding less than 3,000 men was increasingly concerned about being flanked by the growing numbers of Federals gathering across the river.  A minor skirmish in the direction of Harper’s Ferry on October 16, 1861 only added to Evans’ fears, and prompted the Confederate to abandon his position at Leesburg.

Opposing Evans was Brig. Gen. Charles P. Stone’s Corps of Observation, whose primary mission was to monitor Confederate movements.  When Stone’s men reported Evans’ withdrawal, Maj. Gen. George B. McClellan ordered the division of Brig. Gen. George McCall to advance to Edwards Ferry, but the cautious McClellan quickly rescinded the order.  At the same time, McClellan ordered Stone to make a “slight demonstration”—a feint to ascertain Confederate intentions—along the Potomac on October 20.  In the meantime, under orders from Gen. P.G.T. Beauregard, Evans had returned to Leesburg, setting the stage for the battle that followed.

After Stone’s slight demonstration failed to get the attention of the Confederate troops, Stone ordered a reconnaissance party to cross the Potomac at Ball’s Bluff to gain further information about the Confederate positions.  Leading a company of the 15th Massachusetts, Capt. Chase Philbrick crossed the river after dusk on Oct. 20th with orders to scout as far as he could towards Leesburg, until he saw something to arouse suspicion.  Less than a mile from the river bank, Philbrick saw what he believed to be a line of tents in the dim moonlight. The Captain advanced to within 150 feet of the supposed camp, and realized that it seemed to be deserted, with no Confederate troops or campfires in sight.  With his suspicions sufficiently aroused, the inexperienced and over-excited Philbrick returned to his superiors, failing to investigate the matter further. Upon hearing this report, Stone ordered Col. Charles Devens and a 300-man raiding party to cross the river and attack the camp. When dawn broke on the 21st, Devens realized that the “camp” he was after was nothing more than a line of trees – a trick of the moonlight had fooled the overzealous Philbrick.  Receiving further orders to wait for reinforcements and make a move towards Leesburg, Devens’s men encountered pickets from the 17th Mississippi and the skirmish began.

Fact #3: Inexperience, difficult terrain, and a shortage of boats led to a military disaster.

What began as an attempt to raid an unguarded Confederate camp ended in an embarrassing Union defeat.  Not only was the raid based on false intelligence gathered by an inexperienced officer, but communication between Union officers throughout the battle was inefficient.  The terrain of Ball’s Bluff itself presented a forbidding challenge.  Made up of steep, thickly wooded cliffs that bordered the Potomac River, the Federals fought with their backs against river and found it impossible to gain decent ground.  Further complicating matters, only four small boats were available at Harrison’s Island, and Union reinforcements arrived at Ball’s Bluff slowly and in small numbers.  Eventually, Evans’s troops forced the Yankees over the bluff and literally into the Potomac River. Here again, the shortage of boats took its toll on the Federals.  Those who did not surrender would have to swim across, and many drowned in the attempt.  The shocking disparity of casualties made the Union defeat all the more resounding.  The Federal army suffered over 1,000 casualties, while the Confederates lost less than 160.

Fact #4: The only sitting U.S. member of Congress to be killed in battle died at Ball’s Bluff.

Senator Edward Dickinson Baker, a U.S. Senator of Oregon and close friend of President Abraham Lincoln, became a Colonel when he was chosen to lead the California Regiment in May 1861.  He was assigned to Brig. Gen. Stone’s division, stationed along the Potomac River.  On the morning of October 21, Baker learned of Devens’ raiding party into the supposed camp, and went to Stone to be briefed. Stone, not yet knowing of the skirmish, ordered Baker to Ball’s Bluff to take command of the reconnaissance, and to evaluate whether to withdraw troops or send more in.  When Baker learned of the skirmishing, he immediately sent in all his available men, and crossed to Ball’s Bluff himself in the midafternoon. At about 4 p.m., he was struck simultaneously in his heart and brain by four bullets and died instantly.

Fact #5: Ball’s Bluff was the first major battle of the famed California Regiment.

Funded by Californians, the 1st California Regiment was part of an effort to keep California in the Union by encouraging California men from across the United States to enlist in the regiment.  The regiment, however, was Californian in name only; not only was it led by Col. Baker, a Senator from Oregon, but the regiment was raised in Philadelphia, resulting in a regiment where the majority of men were native Pennsylvanians.  After Baker’s death, the regiment was renamed the 71st Pennsylvania Volunteers, and went on to see action at Antietam, Fredericksburg, and Gettysburg, where they participated in the famous repulse of Pickett’s Charge at the Bloody Angle.

Shortly after graduating from Harvard, Oliver Wendell Holmes, Jr., secured a commission as a Lieutenant in the 20th Massachusetts Volunteer Infantry.  Holmes and his fellow officers in the 20th Massachusetts were Harvard graduates and close friends, and the regiment later became known as “The Harvard Regiment.”  Holmes sustained his first major injury of the war at Ball’s Bluff – the 20th Massachusetts’s first engagement. Holmes’ regiment accompanied Devens across the Potomac, and was present on the morning of October 21st.  At about 4:30 in the afternoon, Holmes was shot in the chest, a wound which was nearly fatal.  Holmes recovered, only to be wounded later at Antietam and again at Chancellorsville. Holmes went on to serve as one of America’s most influential and longest serving Supreme Court Justices, a seat he held until the age of 90.

Fact #7: The Battle of Ball’s Bluff led to the creation of the Joint Committee on the Conduct of War.

After the embarrassing loss at Ball’s Bluff, the third major Union defeat of the war, Congressional Republicans had enough of what they considered the incompetency of the officers Lincoln had appointed, and determined to take a larger role in waging the war.  On December 9, 1861, they established the Joint Committee on the Conduct of War to oversee the administration of the Army and the Navy.  Throughout the war, the Committee was chaired by the Radical Republican Senator from Ohio, Benjamin Wade.  The Radical Republicans wanted to pursue a more aggressive course of war than did President Lincoln, and used the Committee to oversee generals and promote men who they believed would support harder war policies.

When called before the Joint Committee on the Conduct of War, Stone testified that he had given Baker the responsibility to decide whether to send more troops across the river or to withdraw those already there.  By sending reinforcements, Stone argued, “Colonel Baker chose to bring on a battle.”  General McClellan was inclined to agree.  After hearing Stone’s version of events, McClellan publicly exonerated Stone from any blame, and published in an army circular that “the disaster was caused by errors committed by the immediate Commander [Baker].” Although Stone and McClellan had both testified that Baker had mismanaged his command during the battle, Stone remained the popular scapegoat for the battle’s failure.  When Stone was called before the Joint Committee to give his version of events at Ball’s Bluff, Congress laid the blame for the battle on Stone.  Stone was a friend of McClellan, a known Democrat, and his word amounted for little to the abolitionist, Radical Republican dominated Committee.  They accused Stone of disloyalty to the Union, and Stone was arrested on February 8, 1862, on orders from Secretary of War Edwin Stanton. He was taken to Fort Lafayette, a prison designated for known Confederate sympathizers, where he was held in solitary confinement without trial.  With no charges having been filed against him, Stone was released after six months, and Stanton ordered him demoted to Colonel and kept out of field work.  In 1864, Stone resigned from the army.

Fact #9: The Ball’s Bluff battlefield has been called by historian Jim Morgan a “preservation success story.”

Despite the fact that the site where the early morning skirmishing took place on October 21st has been lost to development, a portion of the battlefield remains well preserved today. The Northern Virginia Regional Park Authority (NOVA Parks) owns 223 acres of the original battlefield along with the Ball’s Bluff Battlefield National Cemetery, all of which has become Ball’s Bluff Battlefield Regional Park. NOVA Parks has cleared trees to give the battlefield much the same appearance as it would have had approximately 158 years ago, and new improvements, including interpretive trails, guided tours, and updated signs have made Ball’s Bluff a significant preservation site. In addition, Ball’s Bluff Battlefield Park has begun the practice of commemorating the battle annually in October by holding battlefield illuminations. In 1984, the U.S. Department of the Interior designated 76 acres around the battlefield as a National Historic Landmark. In 2017, the boundaries of that landmark designation were expanded to include over 3,300 acres of riverfront land on both sides of the Potomac River and including Harrison Island, Maryland.

Fact #10: The American Battlefield Trust saved 3 acres at the Ball’s Bluff Battlefield in 2013.

In 2013 the Trust had the opportunity to preserve three crucial acres at Ball's Bluff, including the historic Jackson House. On the morning of October 21, 1861, troops from the 15th Massachusetts posted on the Jackson property engaged with a company of the 17th Mississippi. The Mississippians drove the Federals from this property and then halted there while preparing for their afternoon assaults. After the acquisition of the Jackson House, NOVA Parks and the Town of Leesburg coordinated their respective land holdings to create continuity between the main part of the Ball’s Bluff Battlefield and the Jackson House.  The house itself is not currently open to the public but will be considered as part of future plans for Ball’s Bluff and the adjoining Veterans Park in Leesburg.

Learn More: War in the East 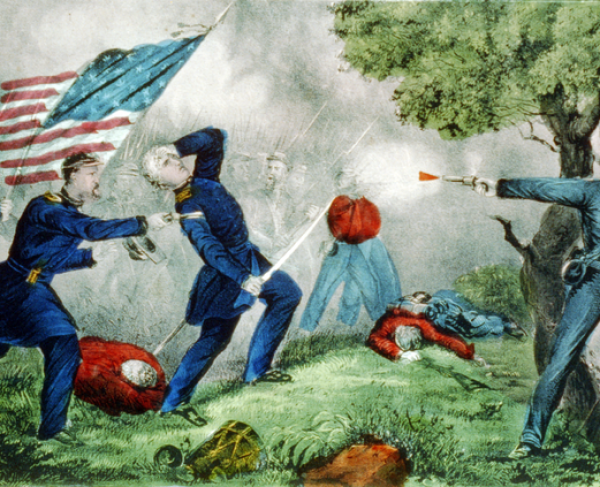 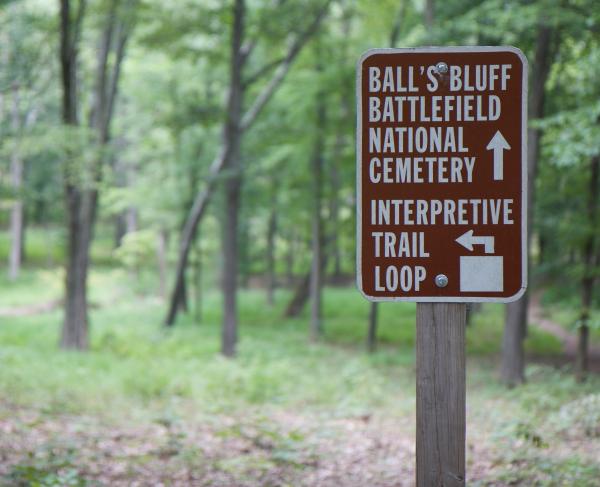