AVAR participants proved to be such a boon to the Saratoga project that its scope expanded as it went. A second phase of the survey excavation will be conducted through the same partnership in the future.

Battlefield archaeology is essential to improving our understanding of past conflicts. Where historians see only inexact written references to embattled landscapes, archaeologists see treasure troves of new historical information waiting to be discovered.

Battlefields are covered in martial debris—buttons, cartridges, bayonets, shrapnel, and more. Even though they are buried underground, they have a story to tell—one that has never been told before.

At the American Battlefield Trust, we understand that the landscape is a critical historical resource. Just as we can learn about how a battle unfolded through topography, we can gain deeper knowledge from artifacts and features below the surface of the land.

Modern archaeologists don’t rely on luck. To make their discoveries, they employ sophisticated metal detectors, ground penetrating radar and other 21st century techniques to identify areas for investigation. After locating an item, the team carefully digs out the item, being careful not to damage or disturb the potential artifact.

When an item is uncovered it is placed in a protective bag, assigned a unique catalogue number, and a small flag is placed where it was located. After the dig, the artifacts are inputted into Geographic Information Software (GIS), and a map of the survey site is created. This software, combined with a laser measuring and GPS system, ensures that an artifact's exact location is identified.

Location is the critical element of battlefield archaeology that enables us to expand our understanding of a battle. When the dig is complete and the map is compiled, the distribution of artifacts can show fields of fire, areas of engagement, and unit positions. Grouping of spent and deformed musket balls show where units came under heavy fire. Similarly, concentrations of dropped cartridges can show where the lines were located. Identifying canister, grapeshot, and solid shot, all help show what the artillery was targeting.

The need for archaeological study to help us deepen our understanding of important battles is far-reaching and ongoing. Projects occur on Trust-owned land regularly, and we support partner groups and the National Park Service with their own efforts.

Since 2019, the American Battlefield Trust has been a proud supporter of efforts to enlist modern warriors in “rehabilitation archaeology” on our nation’s historic battlefields. Working with American Veterans Archaeological Recovery (AVAR), we have twice sent contemporary veterans to assist professional projects at Saratoga National Historical Park. AVAR’s work puts former military personnel in a new kind of trench and helps them heal from their wounds, both seen and unseen. They see a tangible example of their skills being useful and relevant. And when that work is performed on a battlefield, where the veterans bring a level of understanding and connection that no civilian can hope to possess, the impact is even more profound.

In February 2022, AVAR volunteers will join the Finding Medina project, a landmark effort to conclusively determine for the first time the site of the bloodiest battle in Texas history. The August 18, 1813, Battle of Medina was a critical moment in the Mexican War of Independence against Spanish rule. A diverse republican army consisting of Tejano-Mexicans and Tejano-Americans, Americans (including a veteran of the Revolutionary War), Euro-Mexicans, former royalist soldiers, native peoples and at least one enslaved Black man was destroyed by a superior Spanish force, which offered survivors no quarter.

The Trust has pledged $10,000 to assist AVAR in placing its ideal veteran volunteers on this project. Will you join us?

Your gift today will directly benefit veterans who are reintegrating into civilian life – and deepening our understanding of American history.

Will you join us?
Our Goal
To help reintegrate Veterans into civilian life while deepening our understanding of American history through rehabilitation archeology projects. In the popular imagination, archaeological work is centered in the field, physically digging in the dirt. Such a picture, however, is both inaccurate 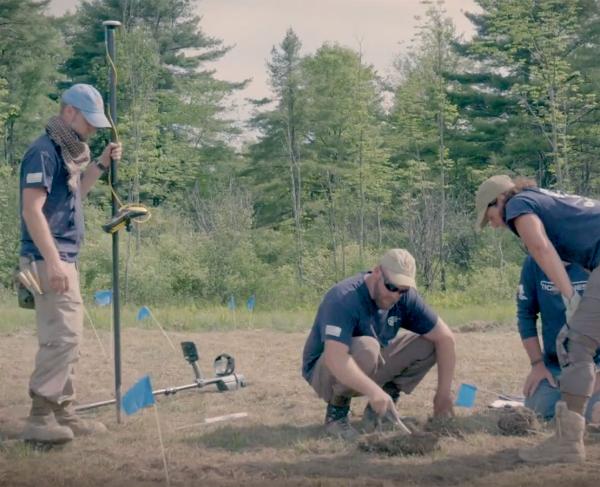