During a Friday evening banquet celebrating the organization’s 30th anniversary at our 2017 Grand Review, the Trust recognized two stalwarts of the conservation movement — Bruce Gottwald and William Howell — with the Edwin C. Bearss Lifetime Achievement Award, the highest honor in the field of battlefield preservation. 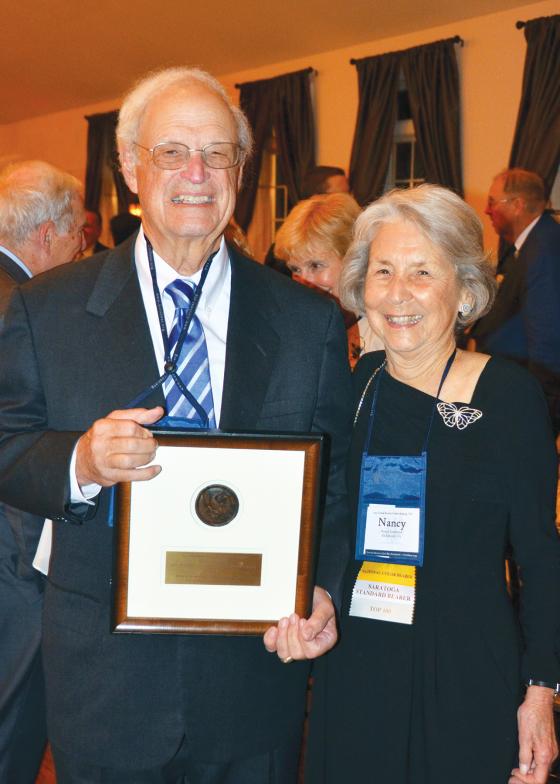 Bruce and Nancy Gottwald at the 2017 Grand Review after presentation of the Edwin C. Bearss Lifetime Achievement Award. Bruce Guthrie

Longtime Trust Board member Bruce C. Gottwald has been a driving force for battlefield preservation and cutting-edge museum interpretation in his native Richmond, Va. He is the former chair of NewMarket Corp. a petroleum additives company that traces its roots as a community fixture to 1887, and has been under the family’s leadership for three generations.

“Bruce Gottwald and his family members have been preservation heroes for decades,” said Trust President James Lighthizer. “They are deeply committed to Virginia history and to their community in the Richmond area. Bruce’s dedication can be seen in his efforts to preserve the antebellum Tredegar Iron Works on the James River, his support of the American Civil War Center and at historic land bordering Richmond National Battlefield Park.”

The 83-year-old Gottwald, who recently stepped down after a six-year term on the Civil War Trust’s board of trustees, can recall when the Tredegar Iron Works actively produced munitions; today, his family owns the site. Gottwald was instrumental in both the creation of the American Civil War Center museum complex and that entity’s merger with the Museum of the Confederacy to create the American Civil War Museum.