(Washington, D.C.) – One hundred and thirty-three years after the real thing debuted to sell-out crowds, people are getting their first look at two very different homages to one of America’s most-iconic paintings.

One—at your fingertips on a smartphone, desktop or tablet—offers a whiz-bang, animated and narrated video overview of the famed Gettysburg Cyclorama.

The other—a curved, floor-to-ceiling series of eight contemporary-art paintings that interpret the monumental panorama—enlivens the inner-circle galleries on the top floor of the Hirshhorn museum on the U.S. capital’s National Mall.

The Civil War Trust created a first-ever, annotated, 360-degree video to introduce viewers in a fresh way to one of the nation’s most beloved artworks. That’s fitting, since 19th-century cycloramas were movies before there were movies, part of mass culture, the IMAX cinema of their time. The Gettysburg Cyclorama depicts the final charge of the Battle of Gettysburg, the gutsy Confederate assault across open ground that’s considered by many to be a turning point of the Civil War and of American history.

The Hirshhorn commissioned internationally acclaimed artist Mark Bradford’s mammoth “Pickett’s Charge” series for the circular, atrium gallery on the art museum’s third floor.  It is Bradford’s first solo exhibition in Washington, D.C., and his first major American solo show after his presentation as the U.S. representative for the 57th Venice Biennale, made possible by the Department of State.

“The Hirshhorn exhibition presented us with an opportunity to think about how to participate, to raise awareness of the Cyclorama and to encourage people to visit Gettysburg and see the original artwork,” said Civil War Trust President James Lighthizer.

Bradford, who is based in Los Angeles, began his nearly 400-feet-long “Pickett’s Charge” three years ago. He drew inspiration for this new work from French artist Paul Philippoteaux’s 1883 cyclorama, which has been restored and is on display at the Museum and Visitors Center in Pennsylvania’s Gettysburg National Military Park.

Inspired by Bradford’s effort, the Trust, with the help of Wide Awake Films of Kansas City, Missouri, created their five-minute, immersive video about the Cyclorama in three weeks. The video complements Bradford’s exhibition, and both interrelate with Gettysburg National Military Park.

“The 360-degree video doesn't replace a visit to the real thing, but it gets as close to the experience as one can without making the trip, adding enhancements like battle sounds, smoke, and dirt flying about, along with a narration to guide you around the painting,” Lighthizer noted.

The Trust hopes its video will entice people to visit the cyclorama at Gettysburg National Military Park and contemporary American artist Mark Bradford's 2017 reflection upon it in his massive installation titled “Pickett's Charge” at the Hirshhorn in Washington.

“It’s one of the top must-do things I always suggest to people for a Gettysburg visit,” Civil War Trust Director of History and Education Garry Adelman said of the Gettysburg original. “If you go there, take a guided tour of the battlefield, see the Cyclorama, and get out in the park on your own. Even soldiers who fought in Pickett’s Charge said that viewing the Cyclorama was something you should do before you die.”

Union Gen. John Gibbon, who was among the officers who Philippoteaux interviewed to inform his mammoth work, said of it: “The perspective and representation of the landscape is simply perfect. It was difficult to disabuse my mind of the impression that I was actually on the ground.”

“It is breathtaking, and something that has nearly vanished today,” Adelman said. “In the 19th century, people experienced cycloramas in the way we do some products now such as movies, art or virtual reality. It’s not only a trip through time, but an educational piece. When you see it, you leave wanting to learn more about Pickett’s Charge and American history.”

Visitors seem to react to Bradford’s artwork in the same way, left intrigued by the subject, and wanting to know more. On Jan. 19 at 12:30 p.m. in the Third Level galleries, Garry Adelman will lead a conversation about the cyclorama craze, the ways in which they fooled the eyes and brains of viewers, and how the Gettysburg painting and its associated diorama help transport people through time and space.

Bradford’s “Pickett’s Charge” series weaves together past and present, illusion and abstraction, inviting visitors to reconsider how narratives about American history are shaped and contested.  The questions his work elicits “are particularly timely in contemporary America,” the Hirshhorn said. “And considering that the Hirshhorn is situated on the National Mall, these questions are made even timelier.”

The referenced media source is missing and needs to be re-embedded.

The Trust’s 5-minute video on the Gettysburg Cyclorama, as well as a 1-minute trailer from it, can be seen at Civilwar.org or on the Trust’s social-media channels.

The Civil War Trust is a national nonprofit land preservation organization devoted to the protection of America’s hallowed battlegrounds. It saves the battlefields of the Civil War, the Revolutionary War and War of 1812, and educates the public about their importance in forging the nation we are today. To date, the Trust has preserved over 47,000 acres of battlefield land in 24 states, including more than 1,000 acres at Gettysburg. Learn more at Civilwar.org. 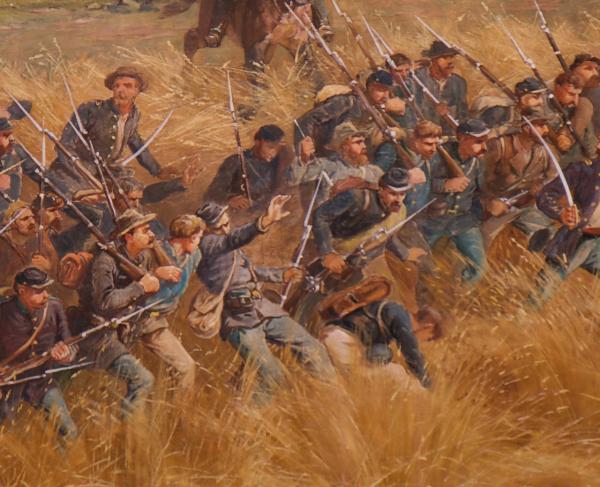 The Gettysburg Cyclorama in 360°