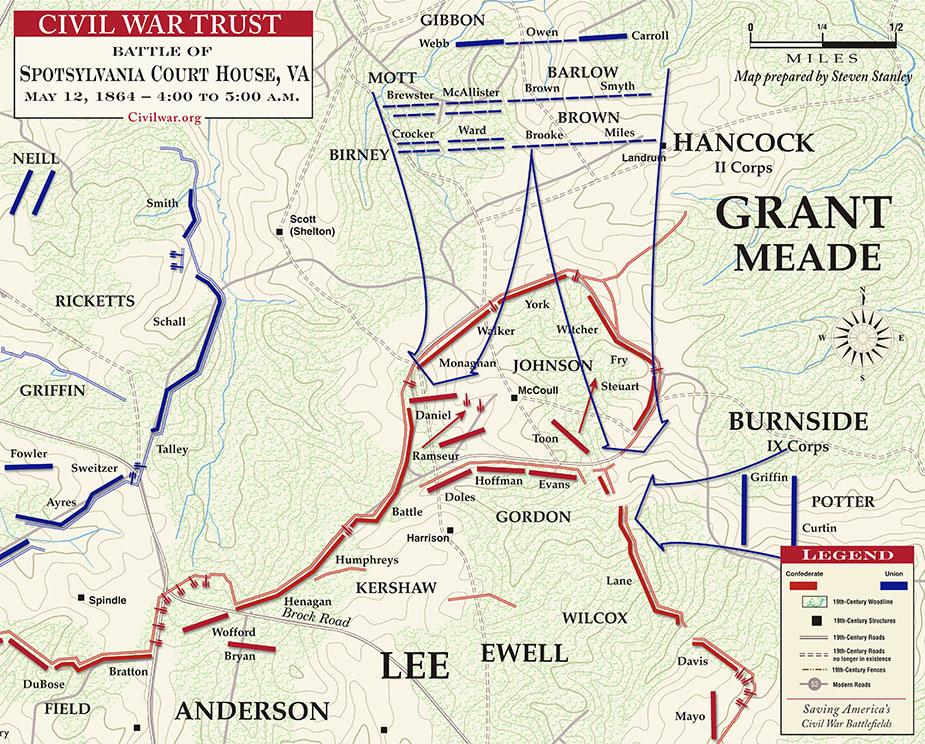 By May 12, the Confederates had established a line of earthworks from Laurel Hill to the Fredericksburg Road. Seeing the merit in Upton's earlier attack, Grant massed 20,000 men of Maj. Gen. Winfield Hancock’s II Corps opposite the tip of the “mule shoe” salient in Lee’s line. Lee noted the Federal movement, but mistakenly believing that Grant was withdrawing, removed his artillery from the area. When Hancock's men advanced that morning, they briefly broke through the Confederate infantry line. Lee sent in reinforcements just as Grant hurled more troops at the Confederate works and Burnside’s IX Corps attacked from the east. Fighting devolved into a hand-to-hand, point-blank slugfest which lasted for nearly 20 hours and claimed roughly 17,000 casualties; one of the bloodiest attacks of the entire war. Union soldiers described the carnage as a “panoply of horror,” a “pandemonium of terror” and a “literal saturnalia of blood.” One Federal soldier described the scene as “a Golgotha” — a place of skulls. “I have, as you know, been in a good many hard fights, but I never saw anything like the contest,” wrote one Louisiana soldier. After the attack, the “mule shoe” salient became known for all time as the Bloody Angle.