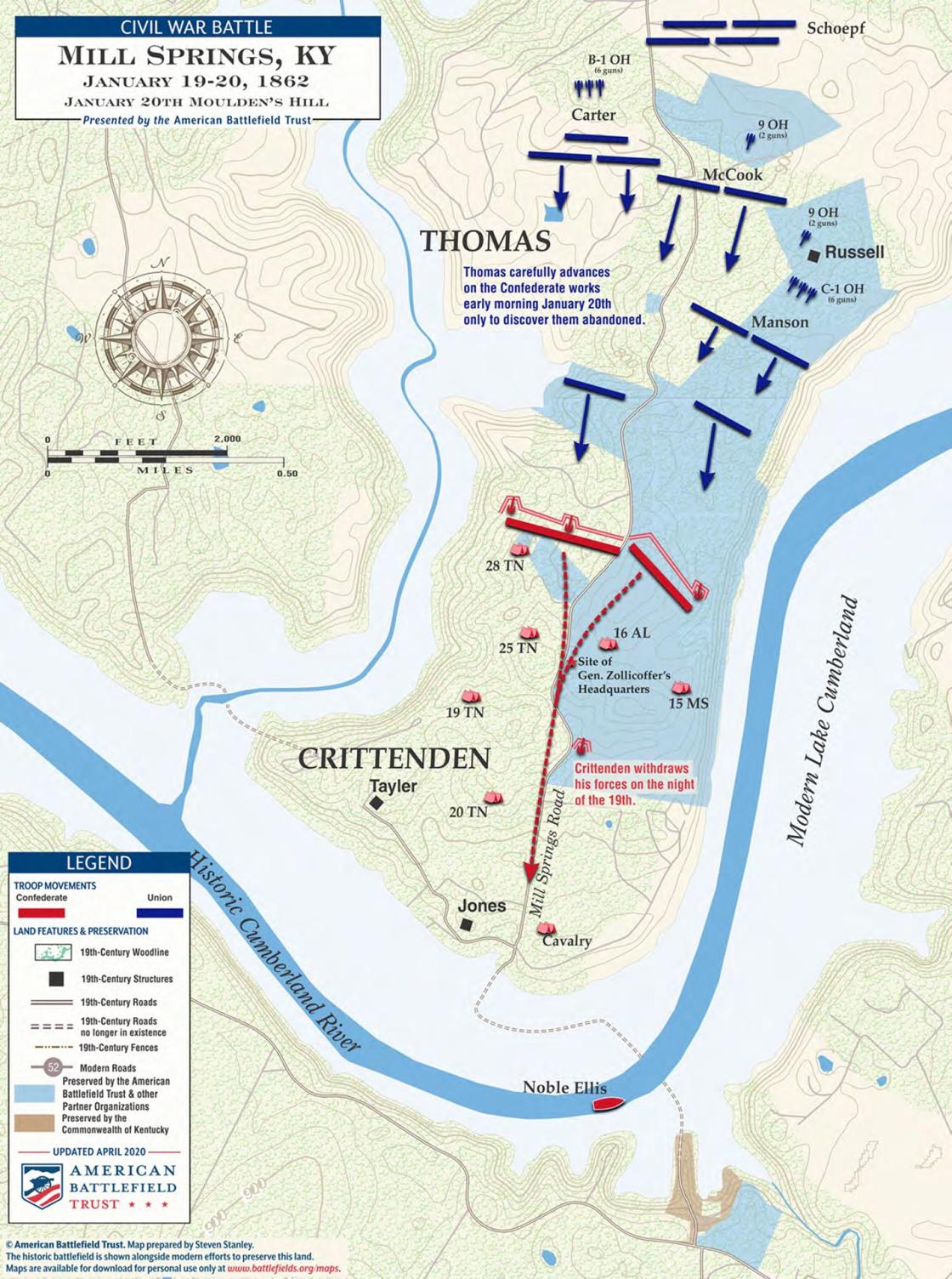 Although Gen. Felix K. Zollicoffer’s primary responsibility was to protect Cumberland Gap, in November 1861 he moved westward into Kentucky to strengthen control of the area around Somerset. The ground at Mill Springs offered a good defensive position, which Zollicoffer fortified. With both sides of the Cumberland River protected, the Confederates went into winter quarters. Meanwhile, Union Gen. George H. Thomas received orders to drive the Rebels across the Cumberland River and break up Gen. George B. Crittenden’s Confederate army. Thomas slowly marched his troops the through rain-soaked country from Lebanon to Logan’s Crossroads, arriving on January 17.  There he waited for Gen. A. Schoepf’s troops from Somerset to join him.  By this point Crittenden, Zollicoffer’s superior, had arrived at Mill Springs and taken command of the Confederate forces. With Thomas nearby, Crittenden decided to preempt any Union assault by attacking the Yankees first. Just after sunrise on January 19 the Confederates struck the Federals at Logan’s Crossroads. Unbeknownst to the Confederates, however, Thomas had been reinforced by some of Schoepf’s troops. In the initial attack, Southerners compelled some of the Yankees to fall back but stiff resistance soon followed, resulting in a number of casualties, including Gen. Zollicoffer who was killed. The Rebels’ subsequent attacks were repulsed. Thomas then initiated successful counterattacks against the Confederate right and left, driving the enemy from the field.  The Confederate retreat finally ended in Murfreesboro, Tennessee. The Union victory at Mill Springs, along with fighting at Middle Creek, drove the last remaining Rebel forces from eastern Kentucky.  Mill Springs was the larger of the two Union Kentucky victories in January 1862. With these victories, the Federals carried the war into Middle Tennessee in February.  Confederate fortunes did not rise again until summer when Gen. Braxton Bragg launched his offensive into Kentucky.