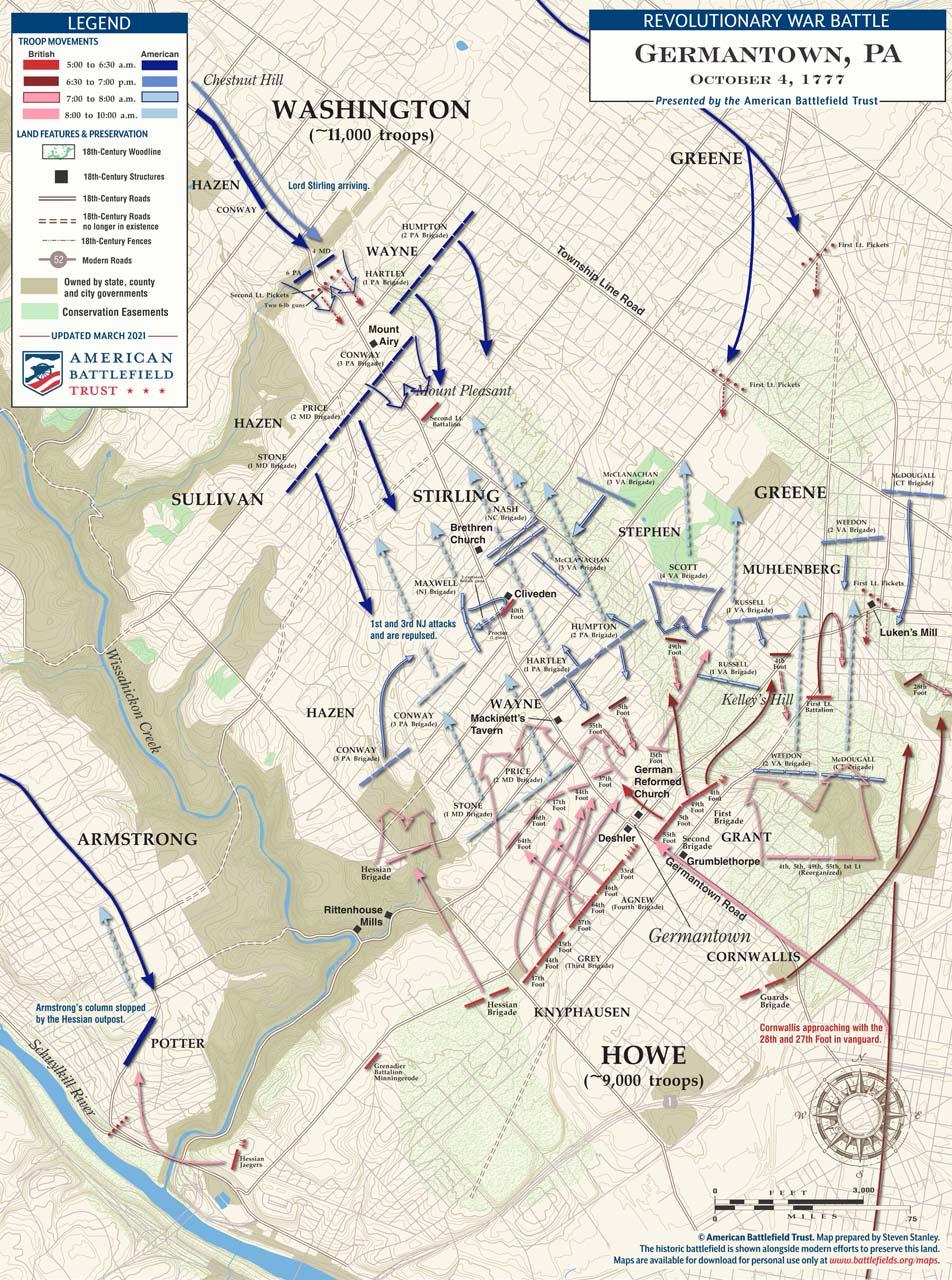 With the American capital in British hands, William Howe left a contingent of some 3,000 British soldiers in Philadelphia, and then moved the remainder of his army north of the city to Germantown, Pennsylvania, on the banks of the Schuylkill River.

Smarting from the defeat at Brandywine, the loss of the capital, and what has been dubbed the Paoli Massacre, George Washington sought to take the fight to the enemy before winter descended upon the colonies. After locating Howe’s main force, Washington conceived an overly complicated plan that sought to coordinate four columns moving in the night to converge simultaneously on an enemy position. If all went well, Washington’s columns would perform a double envelopment and bag Howe’s army. Even for a veteran European army of the age, this was a tall order.

Washington set his plan into motion on the night of October 3. He divided his army so as to attack the British from multiple directions at dawn. Gen. John Sullivan would attack with the main force while Gen. Nathanael Greene attacked on the British right flank. The militia, under Gen. William Smallwood, would target the British extreme right and rear. Unfortunately for Washington, darkness and a heavy fog delayed the advance and cost him the element of surprise.

Sullivan’s column was the first to make contact, driving back the British pickets. The British were so shocked to find a large force of American soldiers that some were cut off from the main body; 120 men under British Col. Thomas Musgrave took shelter in the large stone house of Pennsylvania Supreme Court Chief Justice Benjamin Chew, known as Cliveden. This fortified position proved a thorn in the Americans’ side for the remainder of the battle, with numerous assaults being repulsed with heavy casualties. While the fighting around Cliveden raged on, Sullivan pushed his men towards the British center.

On the American left, a division commanded by Gen. Anthony Wayne, became separated in the fog. To make matters worse, Sullivan’s men were also running low on ammunition. The separation, combined with the lack of fire from their comrades and the commotion of the attack on Cliveden behind them, convinced Wayne’s men that they were cut off, causing them to withdraw.

Greene’s column arrived in time to engage the British before they could rout Wayne. Unfortunately, one of Greene’s brigades mistook Wayne’s men for the British, and opened fire. Wayne’s men returned fire. The resulting firefight caused both units to break and flee the field. Eventually elements of these forces rallied to fight later during the British pursuit from the field.

Washington was thwarted and forced to break off the engagement. Only the steadfastness of Greene’s and Wayne’s men and the American artillery during the retreat prevented a disaster. Despite the British victory, many Europeans, especially the French, were impressed by the continued determination of the Continental Army.